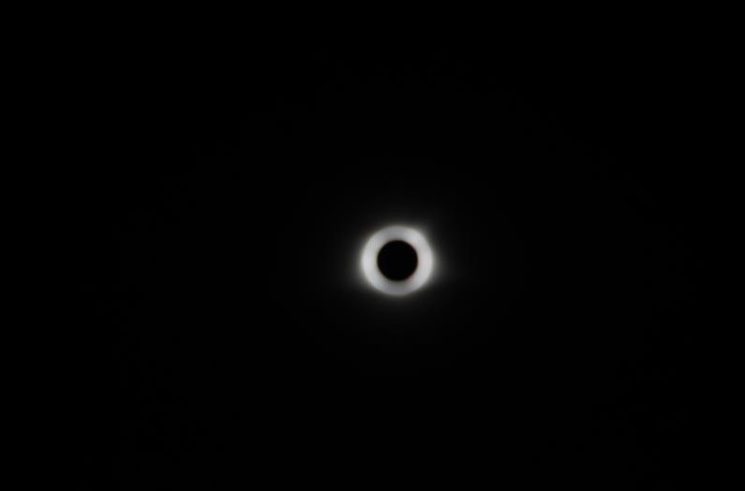 I’ve dreamed of seeing a total eclipse of the sun all my life. When I read there was one on August 21st that passed dead-center over the town of Newberry SC, I was overjoyed. This was my chance. My wife and I had lived in Newberry in 2013. I had friends there. I had a place to stay. I wouldn’t need to pay $1000 for a hotel room.

I had friends who owned Enoree River Vineyards and Winery (a slight plug for a great vineyard and great wine.) They were throwing a party for 300 people at their winery. My friend even had an official pair of Newberry Eclipse 2017 glasses saved for me. I bought a 4×4 ND5 SolarLite polymer filter sheet from Thousand Oaks Optical, the good stuff, and made a filter holder to that I could quickly remove it from the front of my 300mm lens, 450mm on my crop frame D7100, when totality climaxed. I read everything I could find about shooting the eclipse and studied a myriad of images. I wanted to have a great picture to hang on my wall to remind me of the experience and, I admit, to brag about. I was pretty well set.

I planned and planned, but I knew there would be some problems. The eclipse would be total at 2:40 EDT. That’s 1:40 pm in real time. Though not overhead, the sun would be pretty high in the sky. I’m 6’5, 70 years old, don’t have great balance, and just don’t do-high-in-the-sky very well anymore. It’s hard for me to get under a camera that is looking up that much, much less focus it. When the eclipse started at 1:11 EDT — 12:10 in real time, the sun was almost completely overhead. I was able to get some shots off – though I struggled to get the sun in the frame. There are no reference points in a black sky. There is no saying ‘a little to the left of that tree’ or ‘just over that house’. Either the sun is in a completely black frame or it isn’t, and most of the time it isn’t, and neither is anything else. I found myself, without any special tripod, just looking at a black sky, panning around hoping the sun would pass by, and that I’d be able to lock the camera in place before I moved it out of the frame.

By the time the totality came, my camera and I were completely confused. Having to do something, I just hand-held a few shots. I knew they would be worthless – but I had to do something.  It turns out I was right. They were trash.

BUT I DON’T CARE – I HAD EXPERIENCED A TOTAL ECLIPSE OF THE SUN!!!

While preparing for the shoot, I read an article that said not to even waste your time trying to photograph it. Experience it instead. I can’t agree more. ‘Experience’ is the key word – there is far more to experiencing one than just seeing one. And no mere photograph can do one the slightest amount of justice. They are just photographs, but an eclipse is an ECLIPSE!

A total eclipse is something you can’t forget. There is nothing like it in all of nature. If you didn’t know about them, and one occurred, you would think the world might be coming to an end – or that the gods were staring down at you, and not in a friendly way. Imagine the sun, who’s rising in the East and setting in the West is a constant in life, simply disappearing in the middle of the day. The only thing that keeps us from thinking an eclipse is completely, utterly, insanely supernatural is that we have read about them and know when they are coming. Mark Twain had this in mind when he wrote “A Connecticut Yankee in King Arthur’s Court.”

At totality, the sky goes dark. A wind comes up; it gets cool; the world gets quiet. The bright corona makes the sun look like the pupil of a giant eye in the sky menacingly surrounded by a cold white fire. The world around you turns an eerie blue; planets come out and become brightly visible.

I’ll never forget seeing this eclipse, and I’ll tell my grand kids about it. There is another one coming in 2024 that passes right over Dallas, where my kids and grand kids, and maybe even great-grand kids by then, live, and perhaps I’ll get a great picture of it, like so many I have seen of this eclipse. Or maybe I’ll leave all that behind and just soak it in. As I wrote at the beginning, I’ve dreamed of seeing a total eclipse all my life. I’m not disappointed that I didn’t get a great photograph of this one.

David Perry Lawrence is a retired professional photographer from Dallas, TX. He spent his career photographing celebrities, politicians (working for several Presidents of the United States), and leaders in business.  He studied photography with the late Walker Evans at Yale University. After three years in Mexico, he is now living in Greenfield, WI with his wife Judy and two Mexican cats. He currently photographs flowers in his studio, and his prints have been finalists in national juried competitions and have been hung in galleries across the States. You can see more of David’s work on his website. This article was also published here and shared with permission.

13 confessions of an amateur photographer

Here are some weird and funny photographer confessions, can you relate?

Confessions of an ex gear addict: How buying cameras and lenses made me miserable and lose thousands
« This is how you photograph an invisible man
Nikon apologises for pre-order delays due to being sold out of the new D850 »