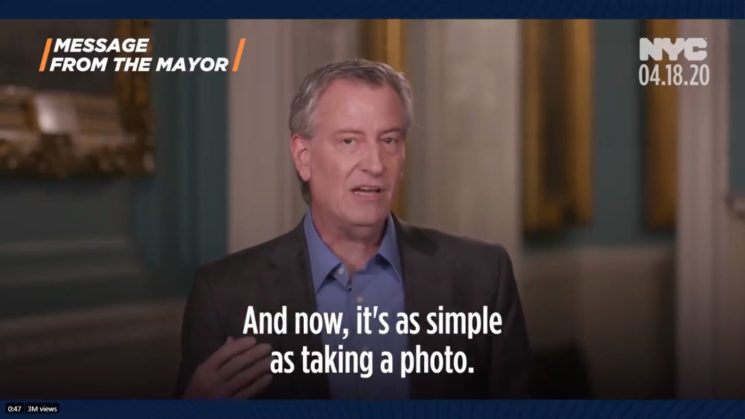 The Mayor of New York City, Bill de Blasio, invited the citizens last week to report anyone who breaks social distancing. He encouraged people to snap a photo and text it to a hotline open specifically for this purpose. However, people reportedly sent in so many memes and obscene photos, that NYC was forced to temporarily disable the hotline.

“How do you report places that aren’t enforcing social distancing? It’s simple: just snap a photo and text it to 311-692,” NYC Mayor writes on Twitter, along with a video message to the citizens.

How do you report places that aren’t enforcing social distancing? It’s simple: just snap a photo and text it to 311-692. #AskMyMayor pic.twitter.com/WQdCcVf1Rl

“When you see a crowd, when you see a line that’s not distanced, when you see a supermarket that’s too crowded – anything – you can report it right away so we can get help there to fix the problem. All you’ve got to do is take the photo and put the location with it, and, bang, send a photo like this and we will make sure that enforcement comes right away.”

It looks like most people didn’t feel like being snitches. So, instead of telling on those who break the social distancing rules, they started flooding the tip line with all sorts of memes and obscene photos.

According to the New York Post, the hotline received a bunch of photos of extended middle fingers and penises. One user reportedly sent the message reading “We will fight this tyrannical overreach!” and received an automatic response thanking them for the tip. Some of them shared the news coverage of the Mayor hitting the gym during the pandemic. And of course, there was a bunch of memes, some of them going as far as comparing Blasio with Adolf Hitler.

People of Twitter weren’t kind to the NYC Mayor either, calling him “a fascist.” Some of them invited everyone to flood the hotline with memes and obscene photos, and it appears that many people have responded. In fact, so many of them have sent them that the hotline had to be temporarily shut down, according to the Post.

For now, NYC is “vetting everything before dispersing the information to precincts,” an NYPD source told the Post. It’s not clear when (and if) the tip line will be active again. Snitching on your fellow neighbors may be “as simple as taking a photo,” but as it appears, having the tip line shut down is equally easy when people get angry.

Artist offers to removes your ex from photos for $10, gets flooded by requests