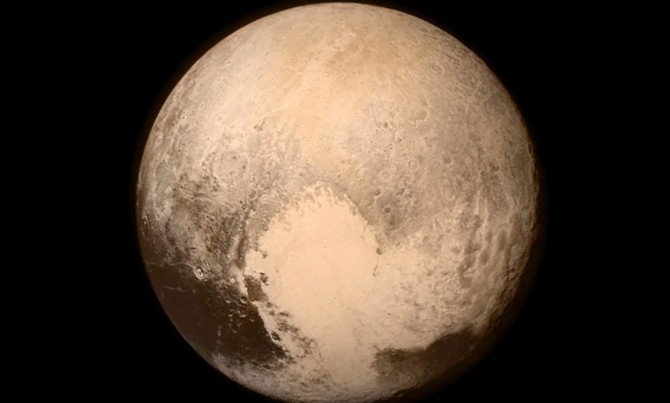 If you are a space fan, this is your day. NASA just released the first surface image of Pluto.

The photo is the closest photo of Pluto ever taken at about 7,800 miles. This is quite amazing, especially compared to the roughly 3 billion (3,000,000,000) miles New Horizons had to travel to get there.

Another interesting fact is that we did not see the photo as soon as it was taken. It took the transmission about 4.5 hours to get to earth.

This could also be the most expensive photo taken at roughly $700 million to build, equip and fly the probe.

The camera that took this photo is names Ralph which is named after Alice’s husband on The Honeymooners. Of course Ralph is more that a camera it is a telescopic device which would be the equivalent of a 75mm lens at f/8.7 mounted on a DSLR.

However building a camera for a vessel that should last 10 years and travel about 3 billion miles is not an easy task. The Atlantic interviews Lisa Hardaway, the lead engineer  for Ralph and she explained that:

[New Horizons] were cruising for nine and a half years, So our system would have to handle the space environment, specifically radiation and thermal fluctuation, for nine and a half years… .
..Going out that far, there are some fluctuations, It can get quite cold, and materials will shrink as they get colder. But different materials shrink at different rates…
…We actually built the mirrors and the chassis out of aluminum so that as they shrink, they would shrink together, to maintain the same focal length. We could do a reasonable test on Earth and still expect the same quality image

Since the camera was designed with taking photos of Pluto in mind, where there is only little sun light, it had to accommodate to the fact that earth is a much more light saturated environment:

We had to get [the settings] so that the detectors could take a minimal amount of photons and turn it into an image. That made Ralph unusually susceptible to very bright light, which required its own precautions.
…We actually had to put a cover on it for launch, because once it separated from the ferrying of the rocket, if you got a glimpse of the sun, or the sun reflected in the moon or Earth, you could saturate the detector and potentially destroy it. We didn’t open the aperture till we were closer to Mars

I think after seeing what new horizon done with a 10-years-old, fixed-settings camera, It would be really hard to sell the idea that “I need new gear” to your significant other.

« Tom Cruise, ‘Scared Sh!tless,’ Hangs Outside a Plane During ‘Mission: Impossible’ Filming
First Ever Photo Of Pluto Surface Is Now Officially A MEME »