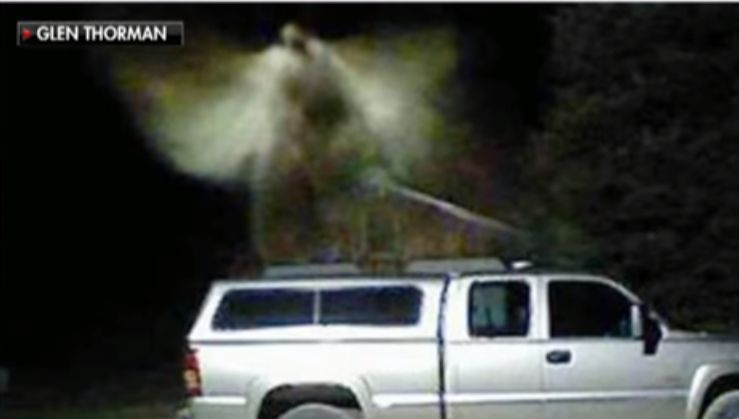 A man from East Jordan, Michigan has recently captured a photo that shows an angel hovering above his truck. Well, at least he claims it’s an angel. The photo went viral and brought him lots of attention and interviews for different publications. But of course, not everyone is convinced that the photo truly is a miracle. Some would say that it’s nothing but a moth.

Glen Thorman, the fire chief for East Jordan, told The Sun that he has a security camera set to take two pictures, a second or two apart. Something set off the camera’s motion detector after midnight, so he didn’t check it immediately. But the next day he saw the two photos his camera took, and he was in awe. In one of them there was “an angel” hovering above his truck, and in the other, it looks like it’s flying away.

Moes then shared the photos on his church’s Facebook page, where it got a lot of attention. It eventually got published across the world and several major outlets interviewed Thorman about “the miracle” his security camera captured.

Thorman told The Sun that this “miracle strengthened his faith and added: “this is real, God is real, angels are real and miracles happen.” But of course, not everyone’s faith is that strong. WBPN took the photos to professional photographer Joe Clark for an opinion. He says it must be a simple moth, which set off the motion detection sensor and got caught on camera. Still, I guess he was careful not to hurt anyone’s feelings, so he added that “there may be room for interpretation” as the moth (or angel) is not clearly in focus.

If you ask me, this is a moth. Even if I did believe in god, angels, and miracles: it’s still obvious that this is a moth. The only scenario in which this isn’t a moth is that it’s another insect. But that’s just my two cents. What do you think?

« One photographer’s rant about shooting BTS on high-end jobs
Canon announcing new 70-200mm f/2.8 and f/4 IS lenses next month »