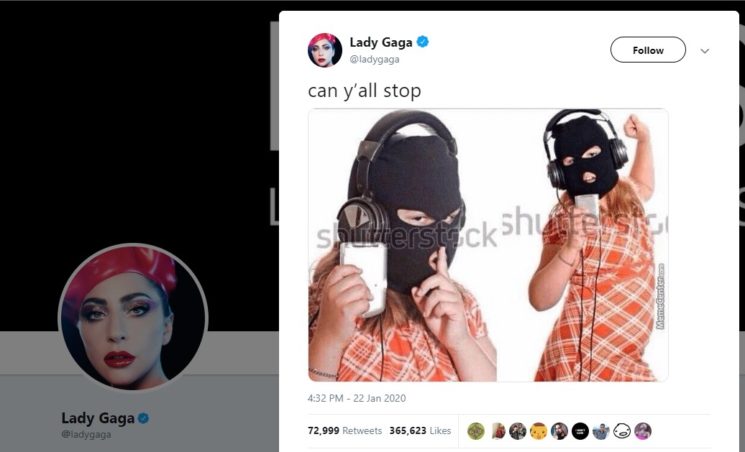 It sometimes amazes me how big artists can be ignorant of copyright laws. Take this latest incident with Lady Gaga from earlier this week.

Lady Gaga tweeted a short “can y’all stop” message. Now, this message would have been a no-story unless it was accompanied by a photo of a masked girl wearing headphones. Headphones and a Shutterstock watermark.

Funnily enough, that tweet was Lady Gaga’s response to her new song that was leaked – Stupid Love. According to some sources, this is Lady Gaga’s way of saying stop stealing my song.

Some fans (well, at least one) seem to get it:

And then, even the photographer chimed in with a non-marked photo :) 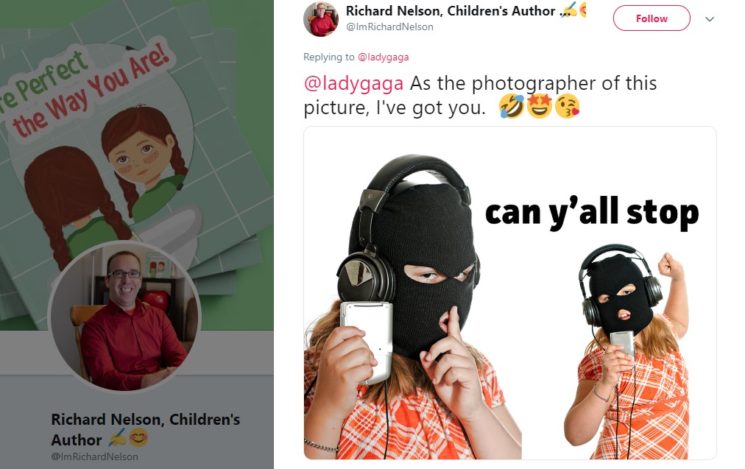 I have a few questions to all parties involved. None of them look particularly good here.

So, this is obviously not a money issue for Lady Gaga. The largest available download on Shutterstock is 2592×3872 pixels. More than enough for twitter. Five images are $49. Let’s say $25 an image. I am assuming that Lady Gaga will not use the rest of the bundle here.

Now, I didn’t really look into Lady Gaga’s bank statement, but I think it’s safe to assume that $49 is pretty much less than she spends on her average breakfast. The only two options I see here are either the person who handles the Insta account did not know better, or they didn’t care. To be honest, it does not really matter. Both options do not reflect well on her.

I would love to see Lady Gaga come out and apologizes publicly. Maybe with a set of a flight and tickets to one of her concerts.

Now, Shutterstock are really not handling this the best way in my opinion. To understand that, let’s look at Shutterstock’s role in the stock photo echo system.

First, Shutterstock are big. Huge. How big? According to Shutterstock, they have over 250,000,000 images with 201,800 new images added daily. They have over 650,000 contributors and sell to over 150 countries. I know this because they say it on their about page. The company is traded on the New York stock exchange with a market cap of 1.57 Billion Dollars. They are not small and they have resources.

Then, let’s look at the role of Shutter Stock in the microstock food chain. (I am not taking any sides here with the is micro-stock good for the industry debate, It’s a worthy debate, but it’s irrelevant to the points I am making). Shutterstock acts as a middleman between the artists and the buyers. There are some intricacies here, but from a birds-eye, Shutterstock license images from the artists and then sell licenses to potential buyers. For the most part, the sums are small (hence the name micro-stock) and you need to sell a lot to create a decent revenue stream. On the low end, a single image on a subscription download will get you about a quarter, while a rarer special license/terms can score up to $120.

As I said, it’s not a lot of money per image. This is where Shutterstock’s community and umbrella come in. Shutterstock’s power comes from numbers, all those 25 cent downloads build up.  And Shutterstock are able to reach those huge numbers because they are big. They are the big player in town and if you, as a photographer, want to play, they hold the best odds. But with great power comes great responsibility. And with those numbers Shutterstock is making an implicit promise, it is promising its suppliers, its creators that it will be on their corner. Shutterstock will manage the infrastructure, take care of distribution, marketing and also collection. So for the photographer, it makes sense. Put your stuff on Shutterstock and Shutterstock shall provide.

This is not the case with the Lady Gaga tweet. At least not publically.

Lady Gaga is in err. To my un-lawerish eye, she is also at fault. What does Shutterstock do? Reply with a Tweet and a wink. This, of course, creates a big ripple and a nice buzz, but at front and center are Shutterstock. The photographer, dragon_fang, is not getting anything from this. So, not only, Lady Gaga used his image without him getting his two dollars or so, Shutterstock is having a publicity round on the back of those images without the photographer getting any compensation as well. (at least not publically).

I would love to hear your thoughts. Did Shutterstock do well in this case? Were they right with their tweet? Should they have done anything differently?

« Should you use a tripod or shoot hand-held for nature photography?
First real world samples and review of the new Laowa 65mm APS-C 2x macro lens »