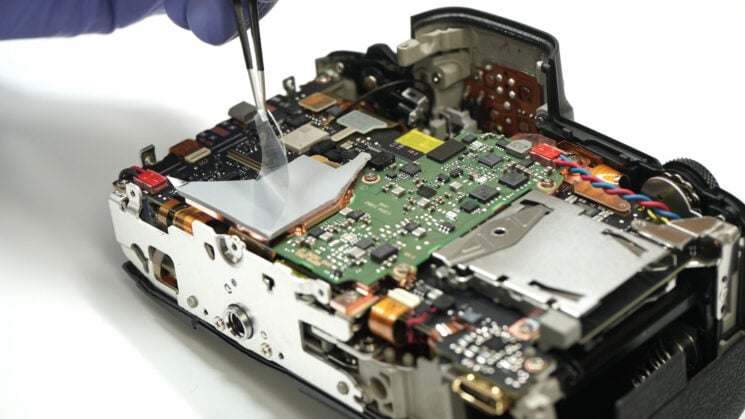 The folks at Kolari Vision have been working hard on trying to solve the Canon EOS R5 overheating issues for a while now. They were the first to tear open the EOS R6 and publish what they saw. They also identified the timer that was causing the camera to shut down at the predetermined times with the original firmware.

When Canon updated the EOS R5 firmware, though, it now seemed to be looking at the actual temperature rather than using a timer – which opened up the possibilities for cooling. Matt Perks had a go at it quite successfully, but now Kolari Vision has also solved it, with a passive cooling mod. But, it costs $399 to them implement it and it will almost certainly void your warranty.

So far, the modification only seems to be available for the EOS R5, although that’s not surprising. While the EOS R6 isn’t completely immune to overheating issues, it less impacted by them due to the fact that it shoots relatively limited video compared to the 8K and 4K 120fps of the EOS R5 – which are still the main culprits for its overheating issues, despite numerous firmware updates.

The modification essentially involves installing a custom copper heatsink to draw heat away from the camera’s processors. This decision was made as the result of a number of thermal analyses performed by Kolari to see where the most heat was assembling – something which was also tested by the folks over at Lensrentals.

According to Kolari’s tests with their new modification installed, the new heatsink assembly will double the record time of the camera at 20°C room temperature. And after 5 minutes cooling down time, you can record again for almost three times the duration of the stock camera. Cooling the environment down just slightly to 15°C means you can record internally indefinitely – according to a chart on the Kolari website.

The one issue with the Kolari Vision solution, though, is that it isn’t a bolt-on external doohicky, like the EOS R5 Cooling Kit Tilta announced last year (that never actually seems to have gone on sale). It’s an internal modification to the camera that’s going to require that they open it up, add some bits, and likely void your warranty in the process.

If you need to be able to shoot longer, there’s an option now. But if your camera dies for whatever reason after you’ve had the modification done… Well, that could get very expensive to fix.

Will you be getting the mod for your EOS R5? You can find out more about it on the Kolari Vision website.

« The Leica SL2-S – Not perfect, but perfect for me
Did the media frame the George Floyd protest coverage for white eyes? »