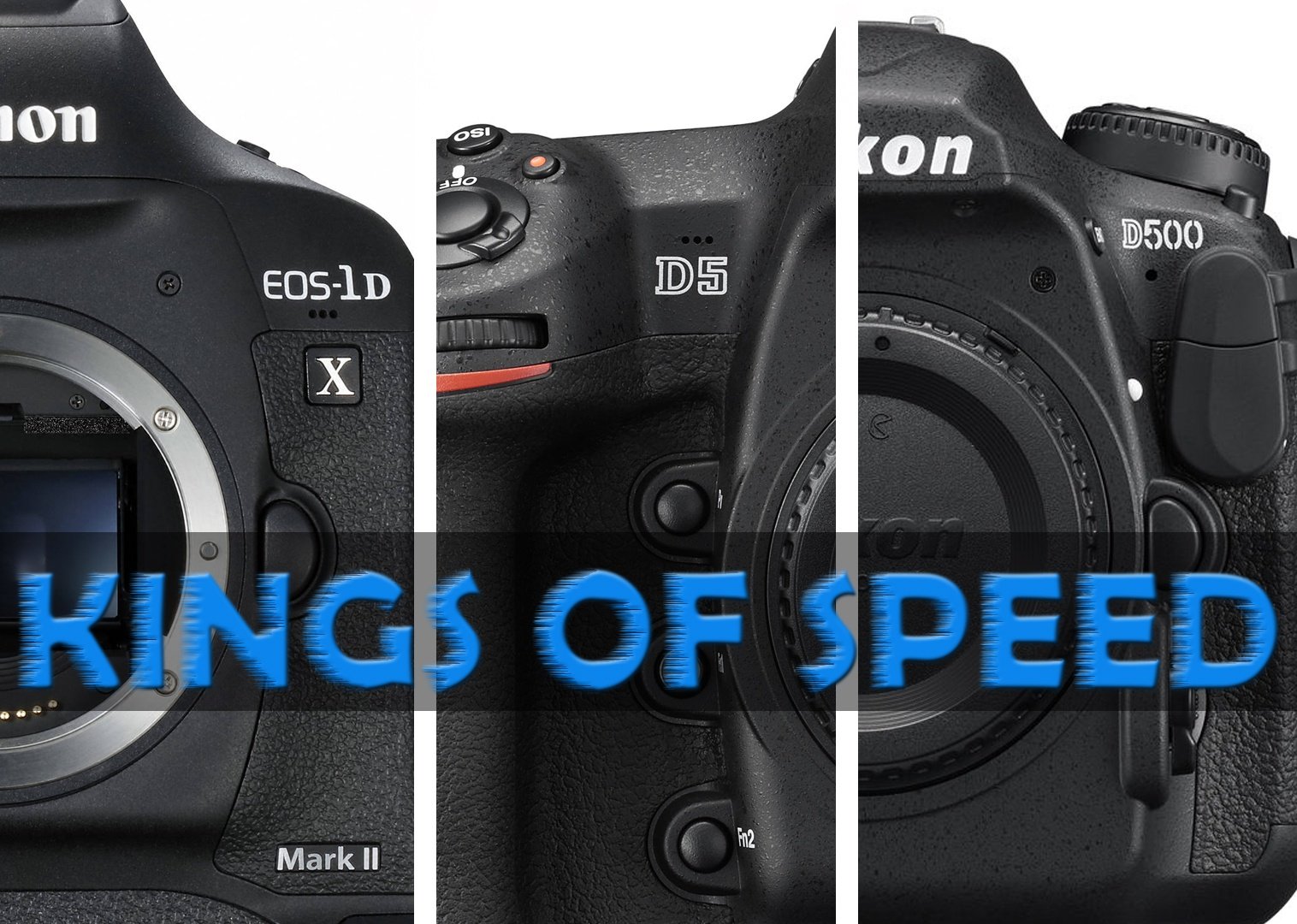 This past month has been excellent for wildlife shooters, sports shooters and speed junkies in general, as we’ve seen the announcement of Canon’s 1D X Mark II and Nikon’s D5 and D500.

These monsters are all about speed, so we’ve gathered everything you need to know about their shutter bursts, frames per second and even calculated how long you can shoot at max speed before destroying the shutter.

As a bonus, we’ve added a video comparing the shutter sounds in burst mode of 17 Canon cameras, ranging from 2.5 to 14 fps.

The importance of a camera’s maximum fps can’t be overstated, and I know some people who’d gladly swap their mother-in-law for another 1-2 fps. They’d probably do it for a lens cloth as well, but you get the point.

That extra little speed boost can be the difference between the best shot of your career and another file in the recycle bin, and that’s why Canon is the big winner here:

While the D500 doesn’t come close to competing with the full-frame flagship models, it is the fastest DX camera Nikon has ever made and holds the title of the fastest crop-factor DSLR together with Canon’s 7D Mark II.

For your listening pleasure, here are what the new cameras sound like at top speed:

We’ve already seen the D5 fire off 200 frames in 17 seconds, but I can’t get enough of hearing this camera’s wonderful shutter sound:

Having a crazy-fast shutter is dandy, but it’s equally important for the camera to be able to keep it up for a while. After all, what good is a fast shutter if it can’t shoot for long enough to capture the action?

The winner here isn’t as clear cut, with each company having one advantage over the other, but since these cameras are aimed (mostly) at professionals I’m going with the Nikons this time:

Nikon D5: Up to 200 frames in 14-bit lossless compressed RAW

Canon EOS-1D X Mark II: Up to 170 frames shooting RAW, or until your card’s capacity is full if you’re shooting JPEG.

Both companies present impressive figures which were made possible thanks to the use of XQD and CFast memory cards. For example, if you opt to use a CF card with the 1D X Mark II you will only get up to 73 RAW files before the camera chokes.

We’ve previously shared a comparison between XQD and CF cards on the Nikon D4s, and there’s no doubt that both card formats are a welcome addition.

I chose Nikon as the winner here due to its better buffer performance when it comes to RAW files, but either way you’ll have plenty of frames to go through after shooting with one of these cameras.

When you’re out on safari (or in the stadium, or wherever), it’s the fps and burst lengths that matter. That being said, in the long run you’ll need a rugged shutter that will be able to perform at such extreme speeds for a long period of time.

At the rate new models come out, most people replace a camera before having to replace their shutter (the D500 is obviously an exception here, and I’m still mad at Nikon for making us wait for so long!). These cameras, however, are made for heavy use, but so are their shutters.

Below are the shutter mechanism ratings for each camera, or in other words, how many photos you should be able to get out of your camera before your shutter kicks the bucket:

Another note about the D500: I feel like I’m making excuses for the camera, but one must remember that it isn’t in the same category as the others. I wouldn’t even include it in this post had it not be released at the same time period. That being said, if all you’re missing in the D500 is a higher shutter rating, you’ll be happy to know that for the price of a D5 you will be able to buy three D500’s and still have $500 change!

I have never ever heard of anyone buying a camera based on how many hours of shooting at maximum fps can be achieved before the shutter packs up, and I probably never will.

I do like useless trivia, though, so here goes:

There you have it, these are the greatest and latest beasts. If you’re interested in the D5 or D500, you’ll have to wait until March to get one. If you’re after the 1D X Mark II, your wait will last until April.

In the meantime, here’s a cool video comparing the shutter sounds of 17 Canon DSLR cameras. It’s a bit old so doesn’t include the latest models, but it’s still cool to see:

Below are the cameras shown in the video:

Pretty amazing how far technology has come, isn’t it?

This King’s Canyon Timelapse Is A Display Made For Kings