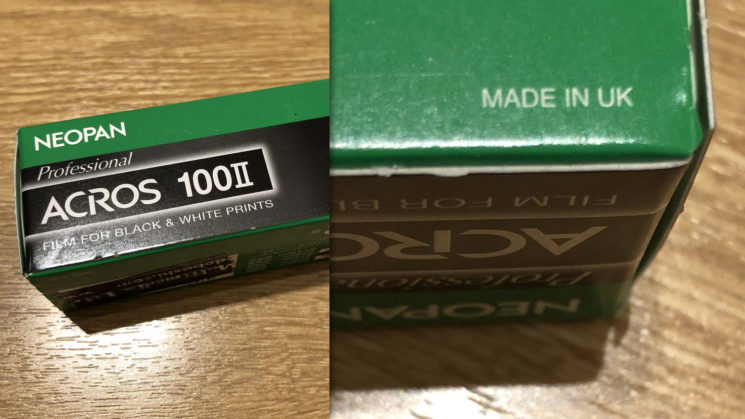 Fujifilm’s recently released Acros II starts shipping in Japan this month, but it looks like it’s possibly being manufactured by Ilford, and not Fujifilm themselves. The big clue comes via the Twitter feed of eto_silversalt who posted photos of Fuji’s new Acros II box in 120 format roll film, which clearly bears the mark “Made in UK”.

Well, the only commercial film manufacturer in the UK is Ilford. We’re not suggesting it’s any kind of rebranded Ilford film, something which Ilford categorically denies they do, but it is certainly possible that they might be manufacturing Acros II for Fuji. And it’s not like the two companies haven’t worked together before.

Ilford Photo was quick to squash any rumours about it simply being rebranded Ilford film, and I believe them. For a start, if they were to do so, they wouldn’t be able to get away with it. The number of “new” random brands of film with weird names that have come out over the last couple of years is testament to that, with quite a few being called out as simply a rebrand of something else. If these little guys can’t do it, the giants of the film world certainly can’t.

I can 100% guarantee that we do not put our ILFORD films into boxes for any other companies.

Note that Ilford did not deny they were making the Fujifilm film. Just that they don’t put Ilford films (their formulas and their IP) into other companies boxes. Not that they don’t manufacture film for 3rd parties.

Further driving the point home that this isn’t a rebranded Ilford film, Emulsive also tweeted a link to the Acros II datasheet, which shows very similar reciprocity to its predecessor. Long exposures is one of the things Acros was famous for, and a big part of its popularity.

If Ilford is manufacturing Fujifilm Acros II, it wouldn’t be the first time the two companies have worked together. Fujifilm’s Neopan 400CN Professional, a black and white film that can be developed in C-41 chemicals, was developed in cooperation with Ilford and “modelled on [Ilford] XP2”. 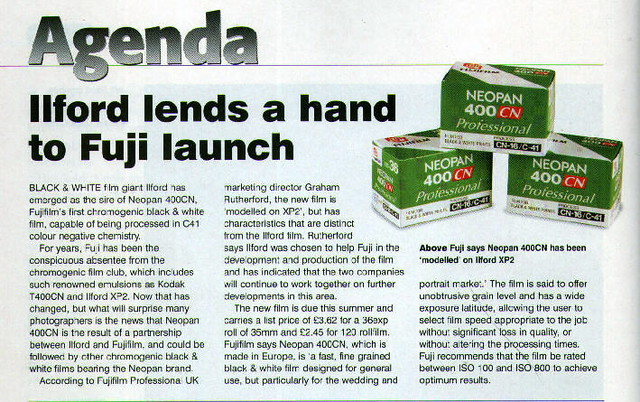 If Fujifilm and Ilford are working together, I think it’s fantastic. Even with film’s recent resurgence, it’s still a tiny industry, especially compared to digital photography. With companies like these potentially working together again, other companies like Ferrania coming back from the dead and Tetenal rescued by employee buyout and introducing new products, not to mention the work done by Impossible/Polaroid, film and other types of analogue photography might just survive forever.

Film really does seem to have become a “community over competition” thing in the last few years. It definitely gives some hope for the future of film.

If Fujifilm is working with Ilford, though, and the film is indeed made in the UK… I have to say, I’m a little disappointed we didn’t see a release here at the same time as Japan. Ahh well, they say patience is a virtue. At the moment, Acros II is expected to reach other parts of the world sometime around Spring 2020.