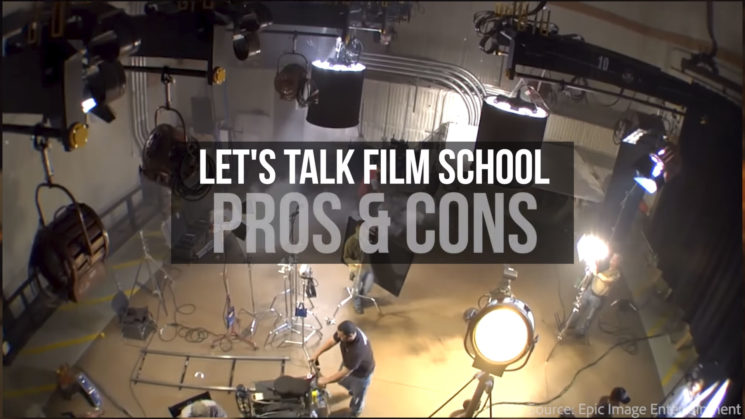 The film school debate never ends. It’s the same with going to school for photography, too. In both instances, there are large numbers of people for it, and just as many against it. But is it right for you? That’s something one can only really determine for themselves. There are both pros and cons go film or photography schools.

The folks at Aputure take a look at film school in this video. They look at the reasons you may want to go and the reasons you may not. And while not all of these reasons may apply to photography school as well, they should help to get you thinking outside of the box at what perks it may offer that you hadn’t thought of.

Filmmaking is expensive. There are no two ways about it. The gear is expensive and location permits can be very expensive. But many rental houses and locations will offer big discounts to film students that you wouldn’t get if you were just turning up as your independent self. Film school can also teach you how to make the most out of a small amount of gear so that you don’t need to spend any more money at all.

As with most professions, you need to build a good network of people in the industry. Going to film school allows you to learn from others who have already experienced real-world production and made the mistakes so that you don’t have to. You’ll also get to meet many new up-and-coming filmmakers at a similar level to your own with whom you can work on projects.

It can also help you to get internships, crew experience, a job after graduating, as well as valuable feedback on your work.

Film school isn’t just one thing. There are many different types of programmes you can attend covering a wide array of topics. Some are all theoretical and some are practical, while others are a hybrid of the two.

There are a lot of public universities out there which have film programmes. These are much more affordable than many of the higher cost private schools.

As mentioned in the video, film school is school. So, the goal is for them to teach and for you to learn. You’ll learn about the history and theory of filmmaking, as well as learn how to use cameras, lighting, audio, and other equipment. Plus, it’s often hands-on education. You learn by doing, not just watching some YouTube video or reading a book.

While there is Pro #4, many film schools are private and very expensive. You could be looking at over $50,000 per year, and if you ultimately don’t get your chosen career path, you could potentially spend the rest of your life paying it back. On top of this, there’s the cost of making your films. While you will often get discounts on gear & locations as a student filmmaker, there is still a cost.

The Internet has been a wonderful thing for the education of many things, not just filmmaking. Just about everything you could potentially learn at film school, and more, is out there on the web. This might seem like a nail in the coffin for film school, but you still have to figure out for yourself what’s good and bad information. What’s actually applicable to you. You might skip something as non-important that’s potentially vital to your success.

I’ve turned this more into a pro for film school, haven’t I? But weighed against the cost (vs free), it’s definitely still a con. But you will need a lot of spare time to still go out and do. Experiment, learn from it. Don’t just watch videos and think you know it.

In a school, you learn what your professors want to teach you. This isn’t necessarily what you want to learn. Structure can be a good thing, but if you’re set on learning X and they spend 6 months teaching the Y that you’re not interested in… Well, if it’s costing you $25K or more for that, then that’s definitely a con.

While Pro #1 was about how you can save money by going to film school to get discounts on renting gear and such, gear as a whole is not as expensive as it once was. At least, not at the entry level. Sure, you’re still going to pay a fortune for an 8K RED camera, but a Blackmagic Pocket Cinema Camera? A used DSLR?

There is so much equipment out there now, and so much competition for those dollars in your pocket that the barrier to entry is as low as it’s ever been. And it’s likely to keep getting lower as time goes on. So, those Pro #1 discounts aren’t often needed unless you know you need a very specific piece of kit for your project.

Ultimately, whether or not film school is for you will depend entirely what you need to do. The pros and cons listed above definitely should give you something to think about. But there’s a lot more research you need to do as well. It may be exactly what you need, or it might be the worst thing you could do for your future.

Should you go to film school or learn filmmaking from the Internet?

Should you go to film school? Here are some pros and cons

« New Fuji Instax camera leaked online, and it oddly looks like the Instagram logo
Ego is the enemy – detach your ego from social media »