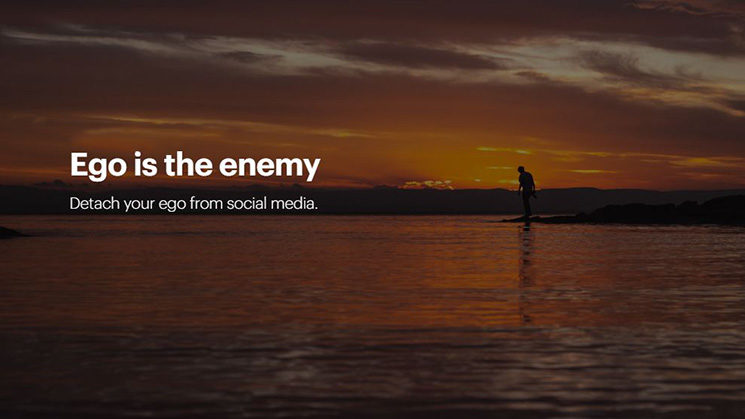 “Abhor flatterers as you would deceivers; for both, if trusted, injure those who trust them” – Isocrates

Real, personal, soul-fulfilling, butterflies in the belly-inducing growth. That’s the key to my happiness; my personal metric for success. It doesn’t matter what I achieve or how much of it I attained. I define myself as successful simply in the process of progress.

Lately, I haven’t been doing much growing. Neither in my personal career, nor in my photography career. It’s made me step back and really take stock over what defines my growth and what inhibits it – the people, scenarios and behaviours that help or hinder me.

One thing that comes up time and time again is the notion of ego. Of elitism. Of a self-importance falsely perpetuated through a small ‘influence’, accompanied by a bunch of likes and a bunch of follows packaged up in a neat little box. Especially if you have a following, social media has a tendency to inflate your sense of self-worth, self-righteousness and level of perceived skill at an accelerated rate.

Of course, ego isn’t something we can all ‘do away’ with completely. As a basic human characteristic, it’s something we’ll all indulge in every once in awhile. But the problem manifests itself when we start to lose our humility, giving way to the gradual onset of surreptitious tactics the ego employs to grow itself and thus nefariously influence our actions.

In the act of breaking down my own behaviours and observing the behaviour of others, I’ve found that it’s the micro interactions of everyday life that are by far the most toxic – because you don’t know they’re causing you harm and unconsciously poisoning your perspective.

With thousands of likes on any given post, it’s hard to feel invalidated about your own work. With so many people agreeing with what you do, surely it’s the right thing to do, right? But the catch is that it never really goes backwards – the more you feed the hamster wheel, the faster it turns. Eventually, your ego starts tying your ‘skill’ and your ‘creativity’ – you start tying the value of your work – to your engagement. You end up doing what the algorithm wants you to do. You stay consistent. You stay in your lane. It’s safe. It’s warm. It’s also so easy to become emotionally invested and infatuated with your own work.

But then, your creative flair burns out. You can only do the one thing for so long without it being soul destroying.

The deeper down the rabbit hole you go, the more you start to inflict your own ego on others. Judging, criticising. Comparing their work to your own and seeing only flaws. Engaging in seemingly harmless banter destroying the work and success of others without stopping to consider the positive perspective to every story.

Your real, personal growth grinds to a halt, and you realise that you don’t want the company of misery any longer.

And after a long while of suffering through the pain, the weight of doing nothing eventually grows heavier than that of action, and so, you do something about it.

At the root of it all rests a little white lie; social media presence, influence, celebrity status, low or high, these socially constructed statuses are fake and should have no real bearing on your own sense of self-worth. Because once you take them away, you are but human. You are but the rest of us.

Having an audience means you have an avenue with which to share your work to enrich the lives of others. Nothing more. You have a responsibility to them, but not them to you. It should be a one-way street. Give your art to the world unconditionally and expect nothing in return. Not fame, not fortune, most certainly not ego.

By putting social media in its place – by detaching its importance from your life – you regain the perspective of reality. That you are not god’s gift to humanity or that you are not too important to endure the mundanities of everyday life.

Rather, return to the basic. That we are humans, sharing art with one another because it enriches our lives by provoking emotion and thought and love. That the more important attributes to personally strive for are humility, diligence and self-awareness.

The ego is the enemy. It always has been. Detachment is the answer, so remove it where you can.

Photographers, manage your ego if you want to grow as artists

How I got banned from photographing the band Arch Enemy
« Is Film School worth it? 5 reasons for and against
Facebook is training its image recognition AI on your Instagram photos »