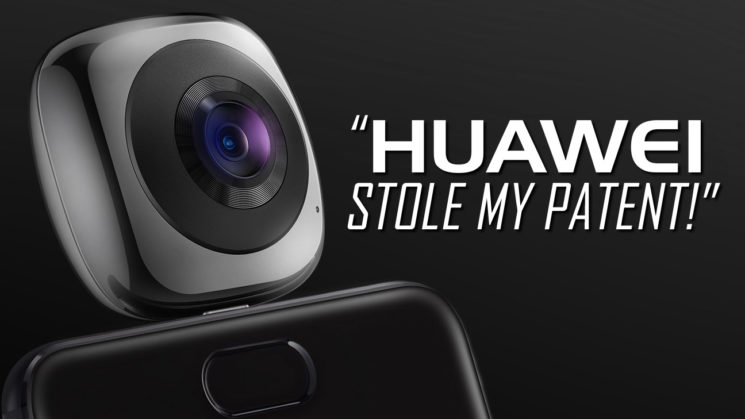 Portuguese inventor, Rui Pedro Oliveira claims that Huawei flew him to meet with them to pitch his patent pending 360 camera. He says they then ceased all contact and essentially ripped off his design in order to produce the Huawei EnVizion 360 Camera. According to an article on Fstoppers, he was then forced to sell his house in order to cover the cost of legal representation.

The article says that in May 2014, Huawei flew Oliveira from Portugal to the Huawei HQ in Plano Texas for a meeting. Who knew Huawei’s headquarters were in Texas? Anyway, it says that the meeting was with Jeff Xu, Eric Murrel, Erica Porter and Michael Guo of Huawei in order for him to present his patent pending SMATCAM; a 360 VR camera addon for smartphones.

He says that he was then asked to come back the next morning to show some more people that were interested in the technology. And after what he suggests to be a wonderful second meeting in which he again demonstrated his idea and how it worked along with his two patents, he went back home to Portugal and Huawei didn’t get in touch again.

Three years later, in 2017, Huawei launched the EnVizion 360 Camera – which Oliveira says looks and works surprisingly like his patent describes. The camera is still selling today through Amazon and other retailers. In face, he says that it’s an exact copy of what he showed them, right down to his ideas for the way it communicates with the phone.

The figures shown in the patents are strikingly similar to the Huawei product. But this isn’t where the story takes a strange turn. After contacting Huawei’s legal department, he claims he was told that they would no longer talk to him as he didn’t have legal representation in the USA, where Huawei’s headquarters is surprisingly located. So, he hired one.

In order to fund US-based attorney, George Neuner, Oliveira says he needed to sell his house. Yup, he sold his house to pursue Huawei over his intellectual property. Mr Neuner has been his attorney since September 2018, and in the months since, he says that Huawei has been putting up one roadblock after another. Presumably in order to either convince Mr Oliveira to just give up and get on with his life, or run out of money to keep paying the attorney.

Head on over to Fstoppers to read the full account, but a tech giant like Huawei certainly has the funds and resources to drag this out as long as they need. It’s a crappy position for him to find himself in, especially if his account is true. Hopefully, Mr Oliveira can find a way to get this resolved before things get that far.

Of course, if it is true, it wouldn’t be the first time a huge corporation has stolen somebody’s idea and then ignored them to the point where it could destroy a person’s life – along with their family. And it certainly won’t be the last.