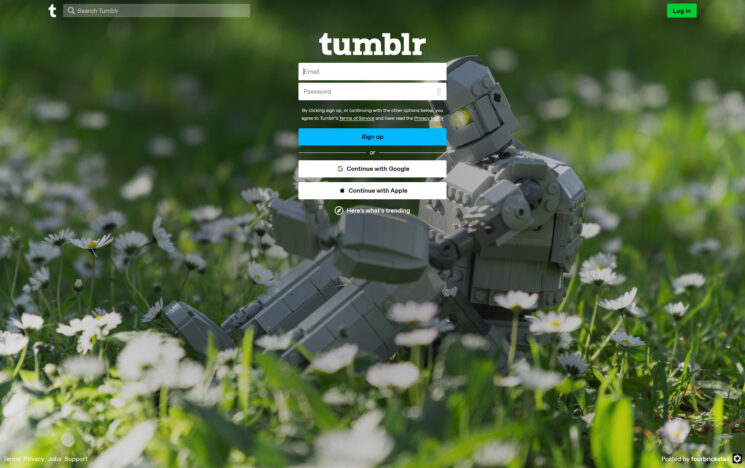 Now that Instagram has transformed into a short-form video platform geared towards creators and influencers looking to go viral, where do we hobbyists and enthusiasts share our photos and find other photographers?

It’s not Flickr: the user base isn’t mainstream enough. It’s not Twitter either: that’s mostly topical posts like news and opinion. Discord isn’t really a social network, but a group chat. And Facebook is a joke.

I’ve dusted off my Tumblr account and after reacquainting myself with it, I’ve got to say that the 15-year-old microblogging platform ticks all the boxes for me:

Recently, Tumblr has gained some new relevance for the simple reason that it hasn’t changed much at all since its heyday. It’s absolutely refreshing at a time when Instagram is constantly adding features and changing the algorithm to transform itself into a platform for video creators.

Being back on Tumblr after all these years gives me nostalgia for a freer social media experience when you just posted what you wanted when you wanted. Nobody cared about optimal image sizes and times for maximum engagement. And maybe that’s part of the allure too: we love to be nostalgic.

Tumblr has always been a place where creativity is celebrated, but it’s got some real perks for photographers. You’ll be relieved to find there aren’t any fixed aspect ratios or forced full-screen viewing like on Instagram, so feel free to ditch those letterboxes and pillar boxes around your photos just to make them fit (please!).

Not having any fixed aspect ratios means you can shoot and post that vertical shot with your camera without cropping to 4:5. I haven’t tested posting a photo shot with my phone that has a default 9:16 aspect ratio though.

Viewing photos on the Tumblr app is also much easier than on Instagram: tap to open a bigger version, then pinch to zoom and pan around.

4:5 photo in feed and zoomed in

4:5 photo in feed and zoomed in

More than a social presence

You’ll also get much more than a profile screen with a tiny bio that has just one link: you get your own URL at yourusername.tumblr.com that can be accessed with any browser and indexed by Google.

Tumblr provides a responsive theme right out of the box so you don’t really have to do anything but post from the app. Here’s my Tumblr site with the default theme: 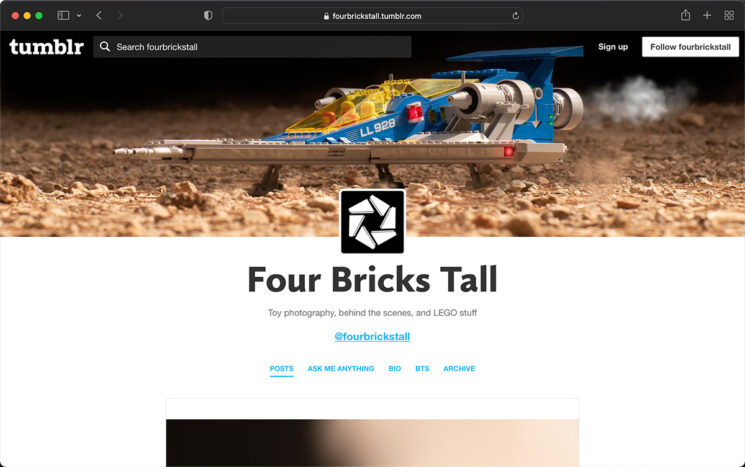 You can customize the default theme if you know HTML/CSS, roll your own theme, or download a free or paid theme. 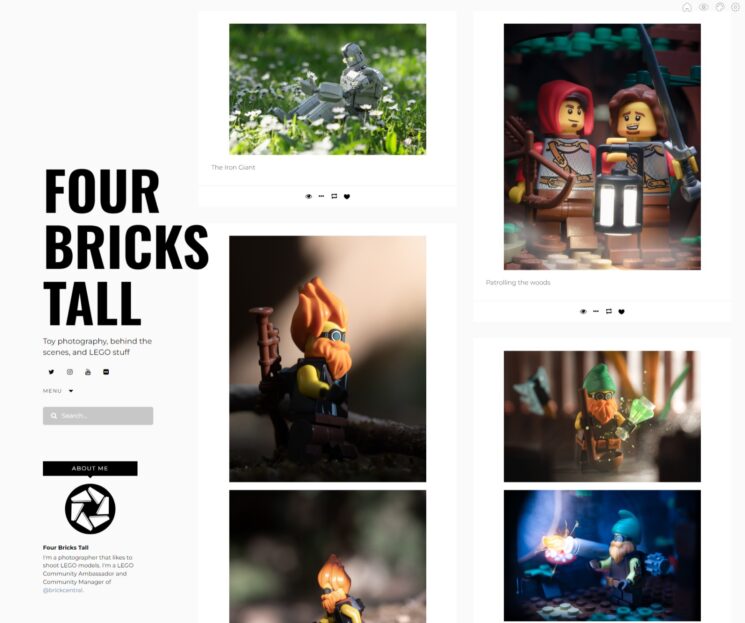 Tumblr blog with a theme applied

Tumblr is also really refreshing in another way that we can only appreciate now: it’s largely devoid of brands and influencers– so far.

The culture at Tumblr is very art and community-oriented: it’s about the creation, not the creator. The community is also famously anti-monetization even though Tumblr has those features, so Instagrammers (and YouTubers, Twitch streamers, or what have you) isn’t a great fit for this platform.

You’ll also notice a stat that so many people on Instagram obsess over is missing: the number of followers. That metric is tucked away under the gear cog for your eyes only. I think this is a much healthier approach.

So if you’re sick of all the reels and suggested posts designed to bring in front-facing creators on Instagram, register for a Tumblr account right now, grab your username and follow these tips for a good Tumblr transition.

Get the chronological feed

Your dashboard (or feed) opens with the Following tab as your main screen, and you can customize it to include recommendations based on an algorithm, posts that your favourite people liked, and popular posts with tags you follow.

If you want a straight-up chronological feed, just switch off the Best stuff first and these other options in your dashboard preferences. 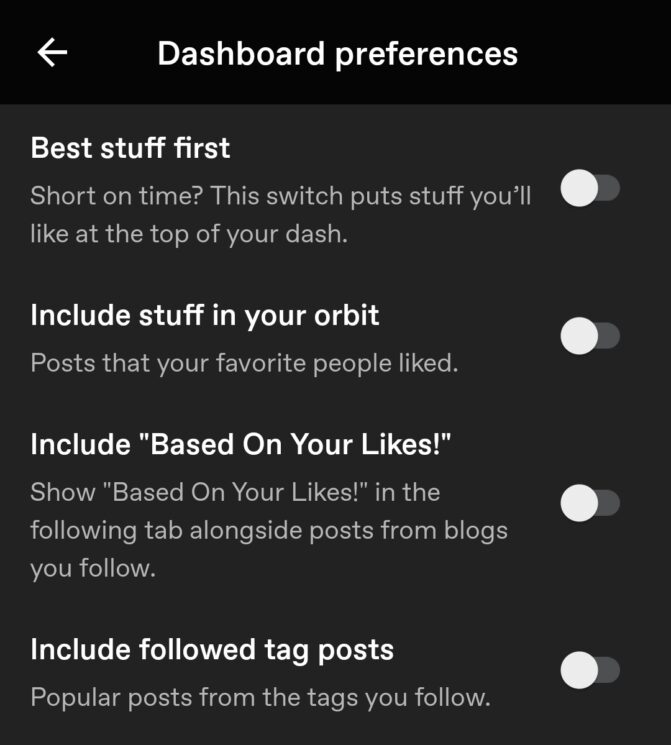 All turned off for a chronological dashboard

If you want to explore other posts from people you’re not following but have them separate from your main feed, you can switch to the For You and Your Tags tabs. (The Your Tags tab is still a test feature rolled out to the app version so it may not be available to you.)

Filter out the unwanted 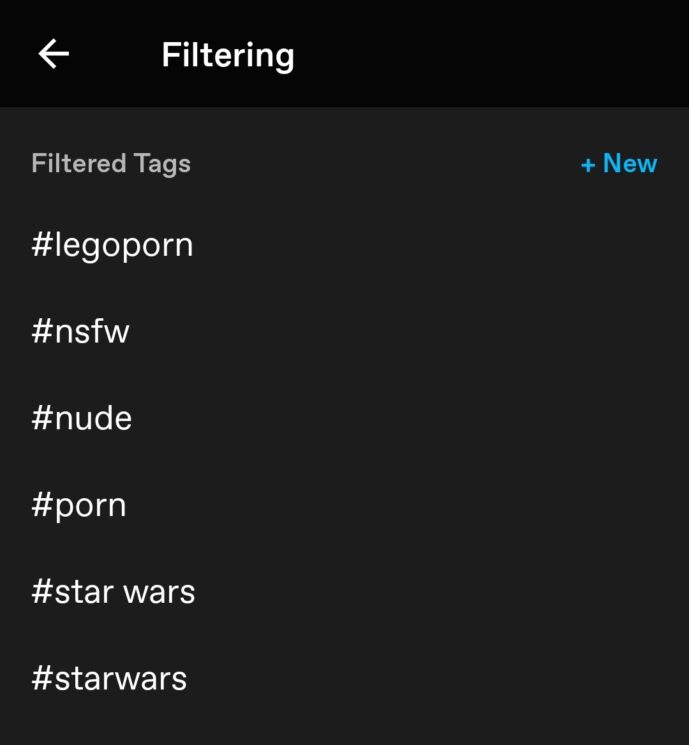 Posts with tags I don’t want to see

On the dashboard, Tumblr won’t show you the content but will give you the option to view it. (Using tag filters is also a really great way to avoid spoilers.) 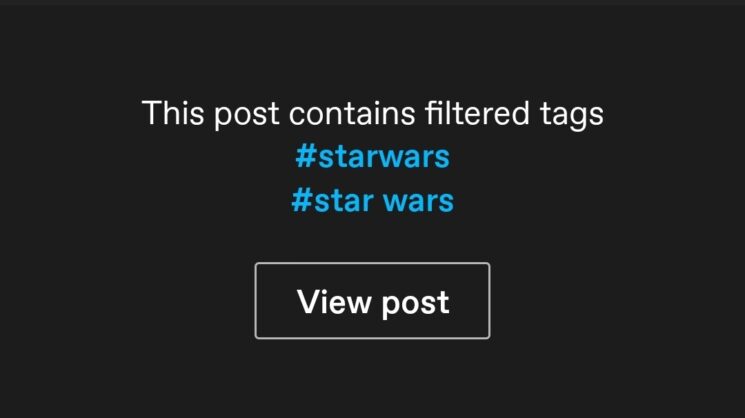 This ability to filter your feed using tags is a godsend and something I would have paid money to do on Instagram. It’s just a regular feature on Tumblr.

Start teaching Tumblr what you like right away even if you haven’t found any blogs to follow yet. Just search for a tag and hit Follow on the search results screen.

If you want to see posts using this tag in your main feed instead of isolated in the Your Tags tab, toggle on Include posts from your followed tags in your dashboard preferences.

On the web app, you can start sharing a photo by clicking on the Photo icon.

On the phone app, just tap the hovering blue pencil button in the bottom right corner of the feed to start any kind of post. You’ll see types of content to add on the next screen: text, link, GIF, images, and audio. 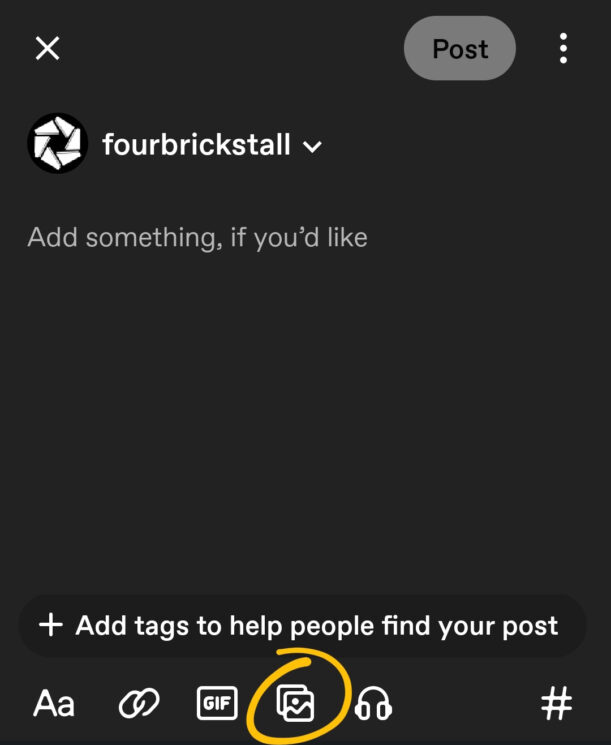 When creating a post on the phone app, I upload the photos first and then I add some text below rather than add text first. If you’re coming from Instagram, this is what we’re used to seeing and I think it makes sense for photography blogs.

To seed my profile, I picked a few recent photos and a few of my most popular photos on Instagram and Flickr to share on Tumblr.

You should upload original files rather than adding links to your posts on Instagram so you get better quality. Instagram resizes your posts to 1080 px on the long side and compresses them.

You can upload a single photo or up to 10 photos in one post. (UPDATE: Up to 30 photos are supported on the web version.) Multiple photos will be displayed in a masonry grid that you can reorganize by dragging them into different positions. Here’s an example of a 10-photo post on my Tumblr.

These are especially great for a series of photos or a narrative. But I wouldn’t use these too much though because they can make your feed look cluttered. A good mix of single photos and multiple photos looks fine though.

Tumblr truncates long posts with a link to view more, so be sparing with the text, especially when sharing multiple photos. There’s a setting you can change to enable long posts if you prefer, but the default is to shorten them.

Use tags in posts

Tagging is essential for discovery on Tumblr, unlike on Instagram where it’s practically theatre. If you don’t use any tags on your posts, your content will likely only be shown to your followers.

However, only the first 20 tags will be used in searches. Anything more than that is just “for show” says the Tumblr Help Center.

A small note: you can use spaces in tags on Tumblr, which make them a lot more readable.

Tumblr has a native way to reshare content: reblogging. When you reblog a post, it appears on your blog with a link to the original source to make sure they are credited properly. You can add text, photos, or a gif to the reblog if you want to make it more personal and relevant to your followers.

No matter how many times your content is reblogged, you will always get the credit. 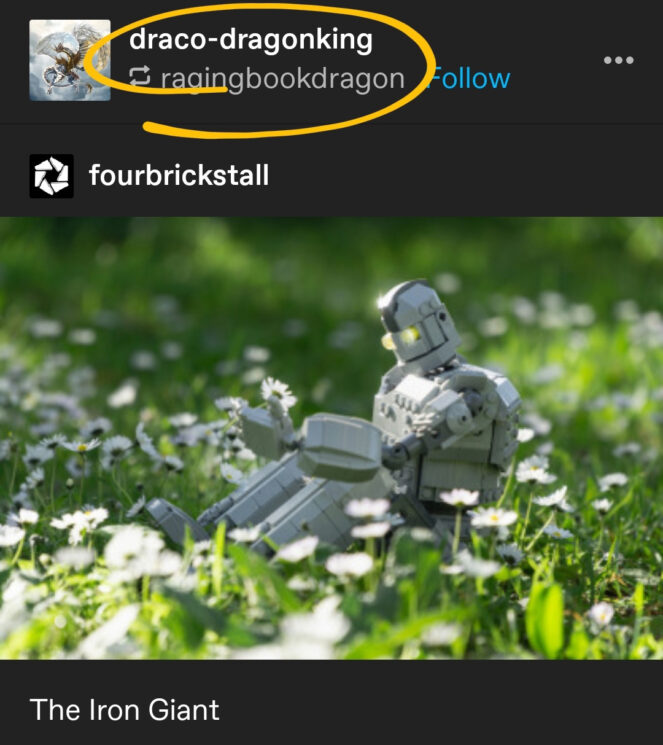 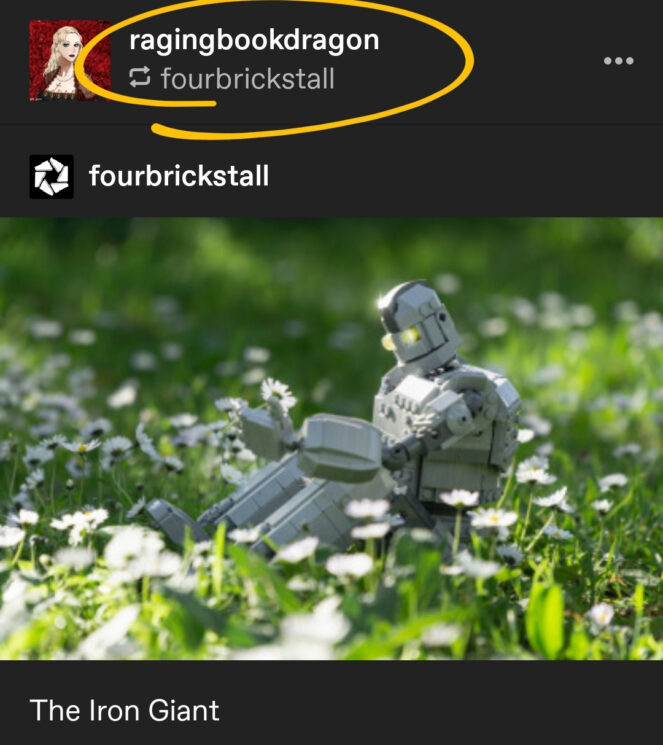 The equivalent of a reblog on Instagram is sharing a post to your story, but stories are only available for 24 hours. There’s no native way to repost on your main feed. On Twitter, the equivalent is a retweet or quote retweet.

One fun thing you might want to do is write an introduction post and then pin it. It will stay at the top of your blog and have a Pinned Post label before the tags.

Remember that Tumblr is a microblogging platform so you can put more than just a photo in your intro post. You can consolidate information and links or have a call to action.

Queue up other posts

You probably have a lot of older photos you want to share with the new audience on Tumblr. The good news is you can add them to a queue so they will publish automatically over time instead of all at once. This will keep your blog active while you shoot fresh photos!

When creating a new post, just tap the meatballs menu (the 3 dots) and select Queue instead of Post now.

Stagger posts with the queue feature

You can change the frequency and timing in your settings. Tap the cog wheel icon at the top right of your blog and select Queue.

Because it’s a microblogging platform and not just a photo-sharing app, there’s a lot more you can do on Tumblr such as formatting text, customizing your website (yourusername.tumblr.com) with a theme, adding pages, tracking with Google Analytics, integrating with Discord, and even tipping with money.

If you are savvier, use IFTTT or Zapier. You’ll get Instagram’s compressed image with a maximum resolution of 1080px on the long side either way but it’s an alternative way to ease into Tumblr.

I think Tumblr can fill the Instagram-shaped hole photographers have been looking for and then some. The exodus from Tumblr to Instagram in the mid-2010s is now headed the other way.