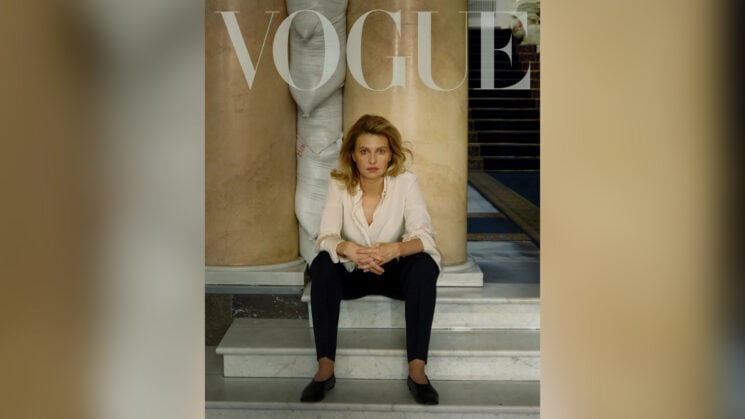 Ukraine’s First Lady, Olena Zelenska has sparked an online trend of women sitting in a traditionally masculine pose. The trend is hashtagged “Sit like a girl” after  Zelenska was featured sitting in this position on the cover of Vogue.

The image was shot by Annie Leibovitz and shows her seated on some steps, front facing the camera, legs apart, elbows resting on knees. The stance apparently provoked a wave of criticism that it wasn’t ladylike enough for a leader’s wife. However, Zelenska is no ordinary woman.

Ukrainian journalist, Zoya Zvynyatskivska called out the misogynistic backlash against Zelenska and started the #SitLikeAGirl hashtag on Instagram which encourages other women to sit in the same pose in a gesture of solidarity with the First Lady. Thousands of women have since joined the trend, including Leibovitz.

Say goodbye to stereotypes. In response to the hate that Olena Zelenska received after her recent Vogue photoshoot, Ukrainian women launched a flash mob dubbed #sitlikeagirl, ridiculing the norms that girls and women are subjected to. Ukrainian artists, journalists, policewomen. pic.twitter.com/L9Fz0PxG8H

The Vogue cover was featured in a digital edition of the magazine, and features the First Lady in an article titled “Portrait of Bravery: Ukraine’s First Lady Olena Zelenska.”

Leibovitz flew to the couple’s compound in Ukraine specifically to photograph Zelenska. The couple has been hailed for not fleeing their country during the Russian invasion. Although this magazine cover has caused some controversy. Some see it as continuing to highlight the plight of Ukraine and raise awareness of the ongoing conflict. Others see it as tasteless that the First Lady is appearing in a fashion magazine during a time of such hardship.

Ultimately, I think it’s a strong image of a strong woman who has been faced with helping to lead and inspire her country through some incredibly difficult times. It would be bizarre to photograph her in a more glamorous, soft, feminine approach.

What we see here is a woman prepared to roll up her sleeves and stand up and fight. As a photographer myself I always enjoy being able to show different facets of people, particularly other women in their portraits.

Juxtaposing traditionally masculine poses onto women can create a powerful message: this woman is not to be messed with.

You can read the Vogue article here.