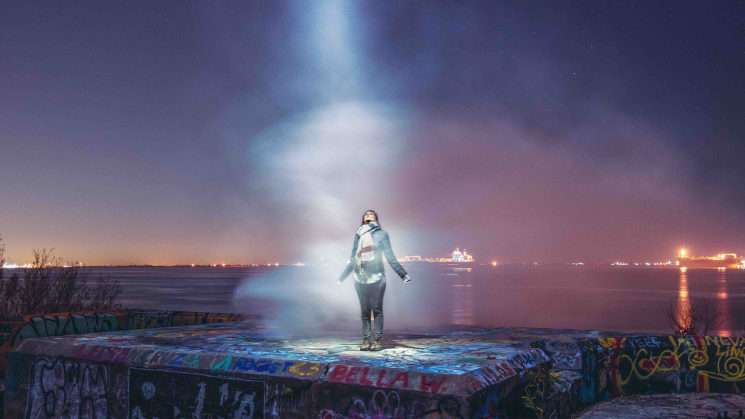 Out of all the kit I own, my drone is probably the most flexible tool my the arsenal. Need to know what your roof looks like? Drone. Want a badass picture of the top of your head? Drone does that. Want to make it look like your significant other is being sucked into a spacecraft that’s en route to the Andromeda system? Drone definitely does that.

I’ve been planning to try something like this for ages, but my anemic first-generation Mavic Pro shook and bucked around like a sad robot with vertigo any time I attached anything weighing over a few grams to the exterior.

As luck would have it, just a few months later that very same Mavic Pro would end up at the bottom of a major shipping lane and, thanks to insurance, a shiny new Phantom 4 Advanced arrived on my doorstep just a few weeks later.

Now armed with a more substantial drone equipped with proper landing gear, my creative lighting horizons were now broadened. The Phantom, with its larger props and overall larger size, can handle substantial additions to its exterior with minimal performance impact. People have even strapped Speedlites to these things! 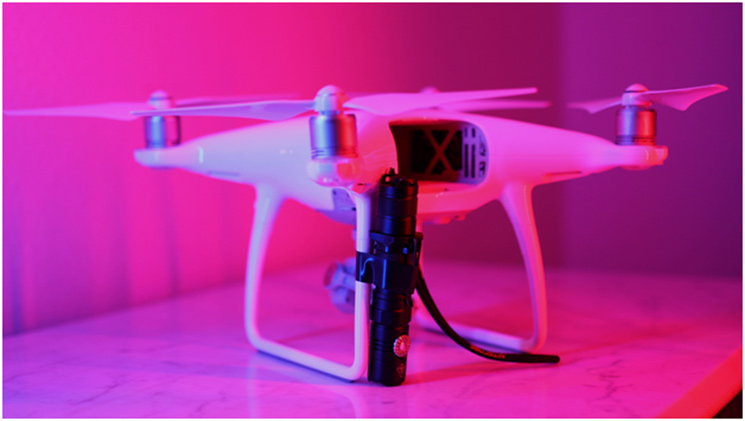 As mentioned before, I used a Phantom 4 Advanced. The generously large landing struts make for a great mounting point for lights. 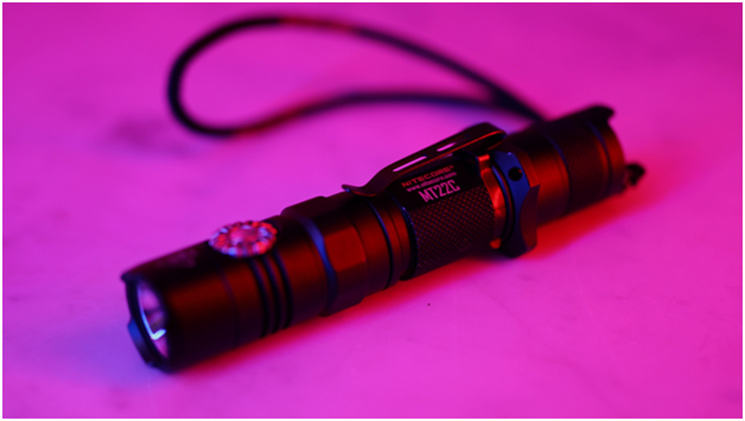 Up next is the light. I chose the Nitecore MT22C for its standout feature – a rotary dial that allows you to precisely dim the output. This will come in handy when it’s time to balance the output properly with the ambient light we’ll be exposing for. I want to get some stars in the background so the ability to turn the power way down is a big bonus. 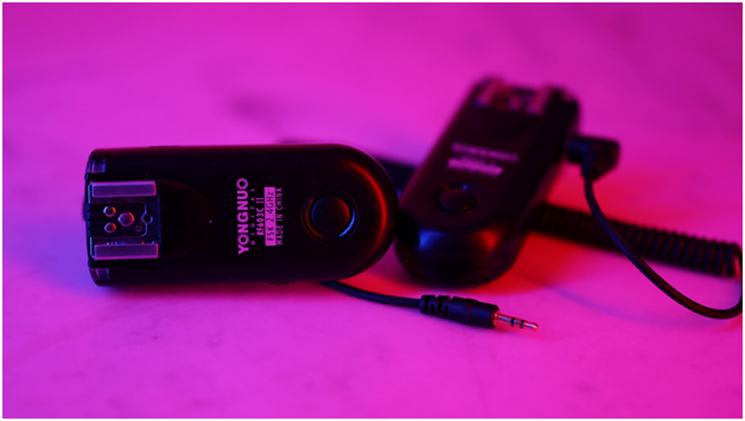 Key to pulling off the shot with minimal assistance is the ability to trigger the shutter wirelessly from around thirty feet from the camera. For this, we use a cheap pair of Yongnuo RF603C wireless shutter triggers. These remotes are cheap and very reliable. 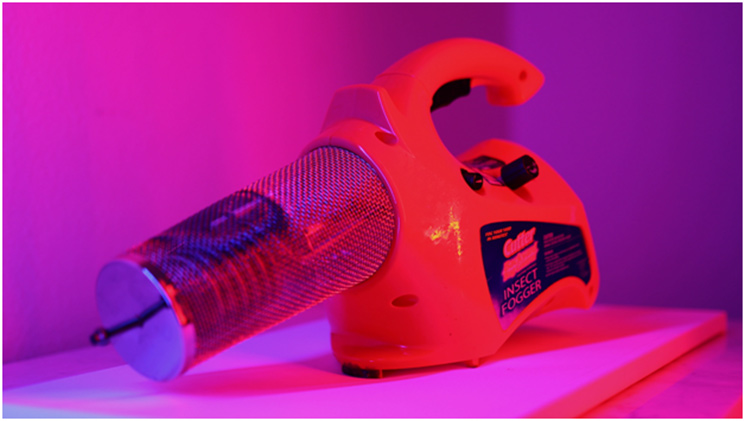 In order to accentuate the beam of light that’ll be shining down on our subject, we used a propane-powered mosquito fogger filled with mineral oil. This combo creates really nice and dense clouds of fog that are perfect for adding some creepy ambience. 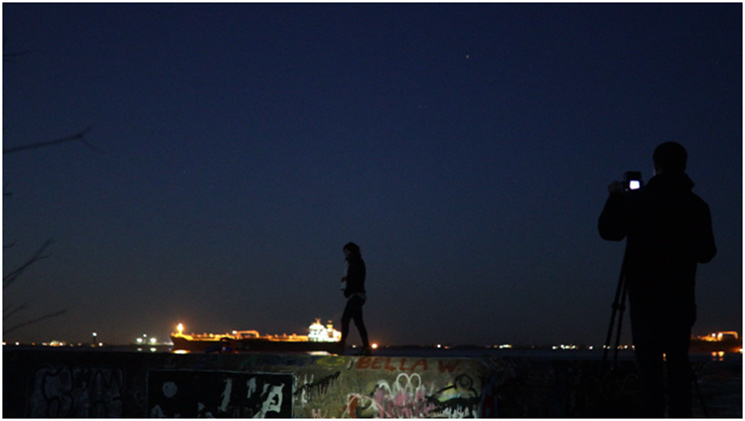 Once the sun went down, I set about determining the proper exposure. Since the subject would have to stay still the entire time I settled on an exposure time of six seconds. Once that’s dialled in, I shined the flashlight onto the foreground while adjusting the dial until it matched the ambient exposure without blowing out. 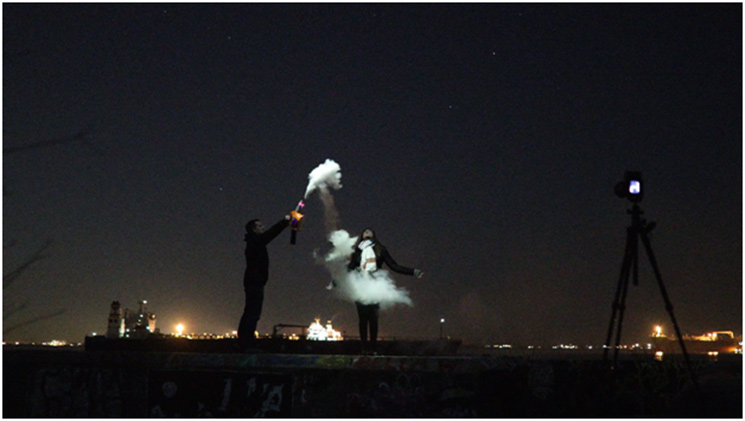 With the exposure figured out and the fogger warmed up, it’s time to shoot! I launched the drone and lined it up directly over the subject. Once the drone is where you need it to be, it will stay perfectly in place as long as it has a good GPS signal lock. Using the wireless remote to fire off shots, I waved the fogger up and down to get nice all-over fogginess.

Typically I would be out of frame whilst fogging the scene, but my chosen location made this impossible. The windiness combined with the narrow roof of the fort we were shooting on forced me to apply the effect from close range. 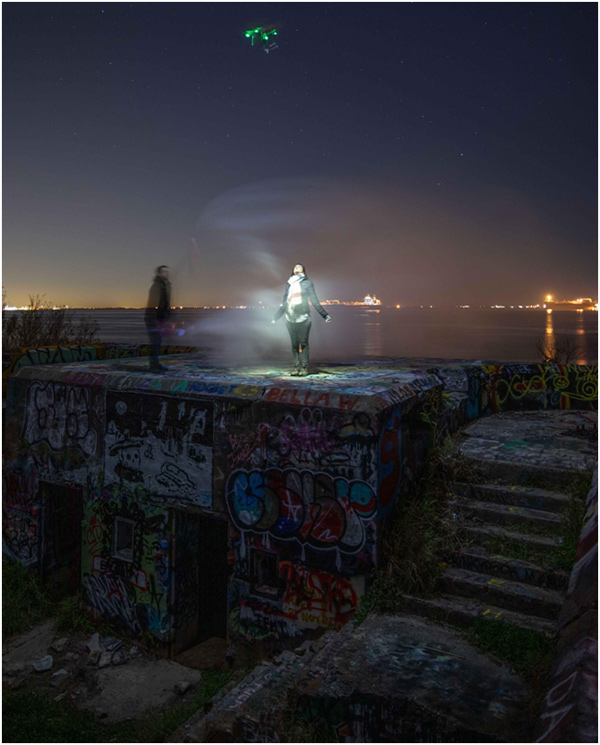 After shooting 40(!) frames, we ended up with a shot that had everything I wanted. Juli had no motion blur, the drone lit her just right, and the foggy cloud was just what I was looking for.

One immediately obvious issue was that there was some dummy with a fog machine in the shot! This was easily remedied by using one of my exposure test shots from earlier to simply mask out the fog machine maniac 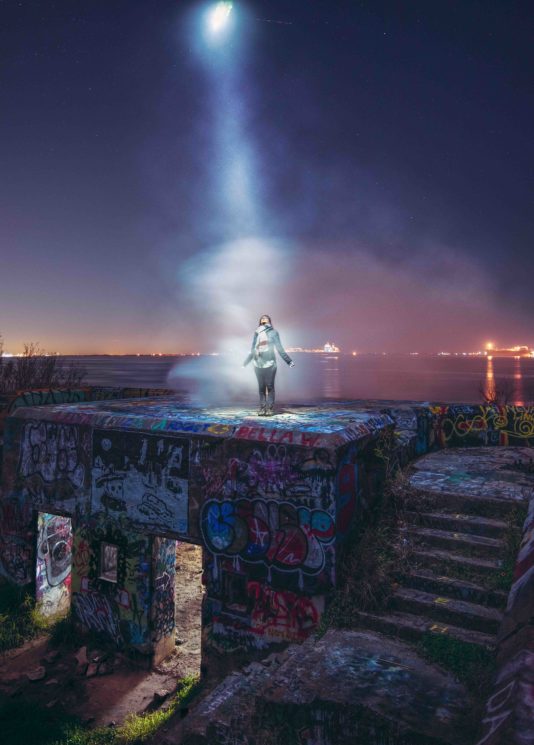 After a bit of Photoshop, I ended up with something I was quite happy with! Here’s a brief rundown of tweaks I made.

The light beam was visible in the cloud in the original shot, but since it was super windy that night I didn’t quite get the tall puffy clouds I really wanted. To fix this, I used a few curves layers to create a more realistic beam of light coming down from the drone. I replaced the drone itself in the shot with a better looking lens flare I captured in one of my previous abduction shots using a shallower aperture.

When I was done with the drone portion of the shoot, I went inside the fort itself and lit up the inside with a flashlight, then later blended this into the final shot.

The other adjustments were fairly standard for my style, lots of curves layers to accentuate different parts of the image – foreground, background, and the subject.  Juli’s face was slightly blown out so a simple darkening curve adjustment brought back the detail in her face. Finally, I color graded the image using the color balance tool and the built-in cobalt-carmine Photoshop LUT.

So that’s my journey! I learned a few good lessons while creating this shot. Going forward I think I’ll bring a friend along that can stay behind the camera while I’m fogging, it’s hard to know when the six-second exposure is finished!

I also think I’ll probably pick a much less windy location the next time around, the fogger tends to make the nicest clouds when the air is super still.

All in all, I’m excited for my next outing with the drone! There are a million ways to use one for lighting a scene, and I’m keen on finding some more.

Zach Alan is a Houston, Texas-based photographer specialising in light painting, portraits and commercial photography. Zach is probably most well for light painting with fire. You can find out more about Zach on his website and follow his work on Instagram.

This is how you photograph paint colliding in mid air using the Hasselblad H6D
« Coronavirus: Canon to temporarily shut down five factories due to supply shortages
The camera in Vivo’s new APEX concept smartphone features a built-in “gimbal” »