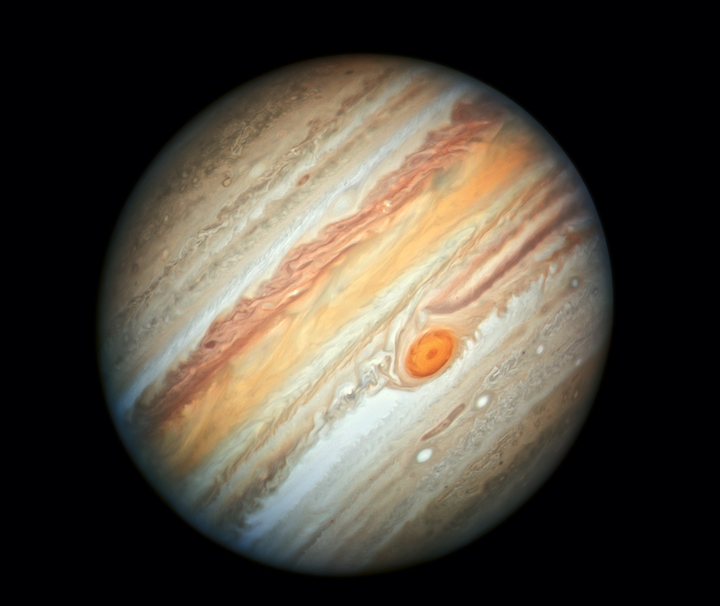 The Hubble Space Telescope has recently captured a new photo of Jupiter, showing its trademark Great Red Spot. NASA has shared the image which shows the gas giant in a more intense color palette and in all its glory, and it could be a step towards a better understanding of Jupiter, but also other planets.

The image was taken on 27 June 2019. According to NASA, the colors and their changes “provide important clues to ongoing processes in planetary atmospheres.” NASA explains that Hubble’s Wide Field Camera 3 observed Jupiter when the planet was 400 million miles from Earth when Jupiter was near “opposition” or almost directly opposite the Sun in the sky.

The Great Red Spot has been noticed way back in the 1800s, but even today no one knows when the storm began. Since Hubble was launched in 1990, the scientists have had a clear view of Jupiter. And this is when they started to notice something strange happening: the storm has been getting smaller, but also getting taller. Astronomers have also noticed the changes in the way the storm interacts with its surroundings. Despite slowly shrinking, the storm is still gigantic: it’s large enough to swallow the Earth.

Jupiter’s famous storm is still veiled in mystery. It’s shrinking, but will it disappear? According to NASA, only time will tell, but even if that happens, it will stay forever captured in Hubble’s images.

Despite the fact that there’s still so much we don’t know about Jupiter, photos such as this one will help scientists investigate further. And as they investigate, they will learn how Jupiter’s atmosphere works, which will lead to a better understanding of weather systems Earth. So, this image isn’t just beautiful to look, it will help us to learn more about Jupiter and other planets, including our own.