Keeping the amount of kit you use at a low level can sometimes be down to simply a lack of availability. But it could also be that you’re simply limited in what you’re able to carry with you to shoot at a client’s location. Or, maybe you just want to bring things right back down to the bare minimum to really understand light and how your gear works.

Whatever the reason, Lindsay Adler is here to help. Using just a single strobe with a big softbox and a big reflector (in this case, a white v-flat) she creates a very effective and dramatic portrait. That’s the key word here, though. Big. Big light sources produce beautiful light for portraits as Lindsay demonstrates in this shot breakdown.

The video goes through Lindsay’s whole lighting process for a session, including the gear used, positions for everything (gear and the subject) and the settings used. She talks about why things are set up in a particular way in order to make sure there’s enough light on the background, the subject and bouncing off that big white v-flat reflector. 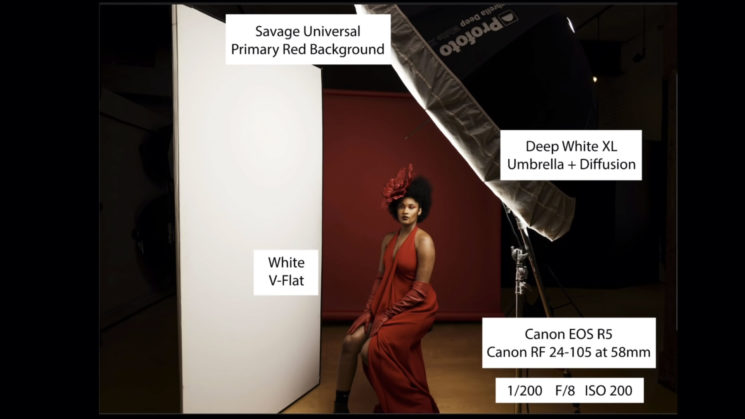 Lindsay’s shooting with the Canon EOS R5 and the RF 24-105mm f/4 lens with a Profoto strobe of some kind along with a large 65″ diffused umbrella. But you can use any camera and lens for this sort of thing as well as pretty much any strobe and large softbox. I probably wouldn’t try it with a speedlight, though. They just don’t really have the power and light distribution to fill a large softbox. But if you don’t have a strobe yet, you could start off with something like the inexpensive Godox MS300 and Glow EZ Lock 48″ Deep Parabolic softbox.

Working with just a single light can be challenging for a number of reasons that Lindsay highlights in the video, but once you learn to embrace the minimalist setup and understand exactly what the light is doing at any given moment, you realise just how little kit you can get by with.

How to create a stylized art shoot on a shoestring budget

How to use a reflector to create flattering light for portraits

What does it take to create a stylized image?