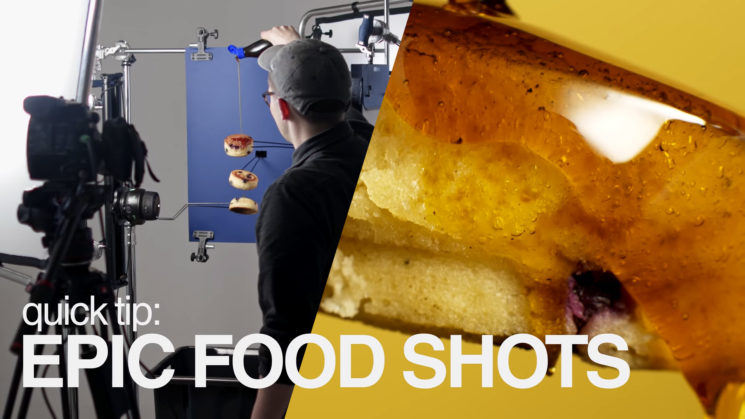 We’ve all seen those fancy slow-motion food videos with ingredients slamming into each other in midair. Such videos often require expensive rigs involving multiple motion control robots that cost more than your house. But you don’t necessarily need to spend quite that much to start having a go at this kind of thing yourself.

After watching some of Steve Giralt’s work, the guys from Syrp were inspired to try it with a couple of their Magic Carpet sliders and Genie Mini heads to see if they could pull off a food video that had a similar look. I think they managed to do it quite well, and they were able to control the whole setup from just an iPad.

The result isn’t perfect, but when you look at the cost of a couple of sliders and pan heads vs Steve’s three Bolt robot arms, it’s not bad at all. The team used a slider on each side of the subject to hold the top and bottom pancakes, and then a third was held in the middle by a Genie Mini head behind the background.

All three components to the system were controlled from a single iPad. We’ve shown Syrp’s software in the past, and how easy it is to set your start and endpoints, add keyframes and timing, and then set it off doing its thing, but this is probably the most elaborate setup I’ve seen which uses it.

Some post work was required in order to remove the metal rods attaching the pancakes to each of the Genie Minis, and they say that if they had to do things over, they’d take the extra hour and a half setup time to better hide those rods during capture in order to save around six hours in post trying to get rid of them effectively. There’s a lot to be said for planning, and getting things figured out in advance can save you a lot of time and headaches.

The final video isn’t perfect, as the rods do wobble a bit, which the team mentions, and a couple of the post-work cover-ups do glitch just a tad. But the final result isn’t bad at all, especially if you’re working on a low budget. Overall, it’s pretty effective and 99% of people would never notice those tiny issues. And with a bit more pre-shoot planning and setup, and shooting multiple sequences to give you more options, it shouldn’t be difficult to take it that last bit of the way to perfection.