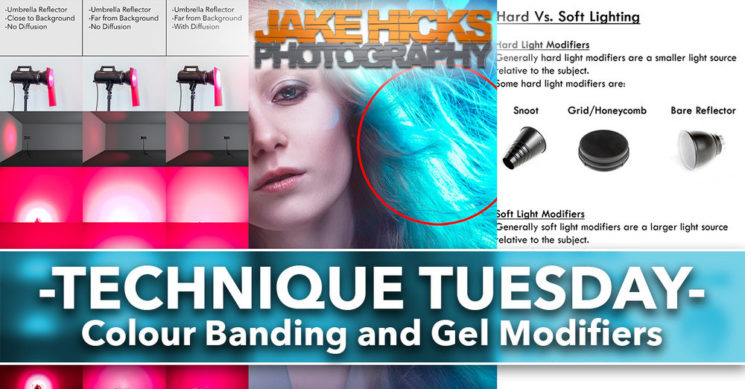 For those of us that have dealt with colour in any way digitally in the last decade, we are unfortunately all too familiar with the dreaded colour banding issues. If you’re not sure what colour banding is, then it’s the visual ‘stepping’ of colour that happens in digital files.

It happens a lot and it can happen for any number of reasons. The most common scapegoats for colour banding are usually poor colour depth in our cameras, aggressive compression algorithms with online sites and any number of other technical failings. Although all of these are often part of the problem, I see one other major culprit of severe colour banding and that’s lighting.

Lighting with coloured gels is hard. Just let me be clear on that from the start, and to that end, it’s far easier to get horrendous looking coloured light images than good ones. Nearly everybody at my lighting workshops says that they are there because they tried to shoot with coloured gels and couldn’t get it to work, so came to learn more. There are a lot of elements that need to be working together for gelled shots to look good and that often begins with the lighting modifiers we use. 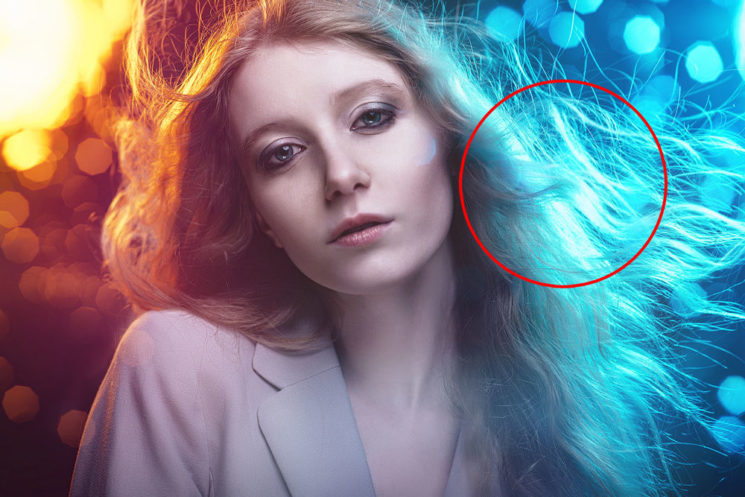 Colour banding is often used as a term to describe harsh steps in colour. Image compression and colour depths aside, poor modifier choices will also create these ugly steps in colour.

Most people start using gels through harder light modifier like grids and bare reflectors because the light is far easier to control. Unfortunately the down side of using these hard light modifiers is that I often see blown highlights in the gels. But blown highlights in the gels are not blown to white, they’re blown to a single block of colour or their ‘saturation limit’. I’ll cover ‘saturation limits’ another day as that’s a whole other issue and in this article I wanted to focus on how to avoid the issue more than explain them.

What is Colour Banding?

If you’ve used gels with speedlights or hard light modifiers then I’m sure you’ll have seen this clipping in the colours that we often refer to as colour banding. It is especially apparent when we see it on blank surfaces like backgrounds or even clothing. It’s incredibly annoying and looks very ugly and unprofessional so we all try to avoid it as much as possible, but unfortunately that’s a lot easier said then done. Like I mentioned earlier, older camera tech, online compression and a whole host of other things conspire to make colour banding happen, but we must ensure that we don’t start the issue with poor modifier choices when we make the initial shot. 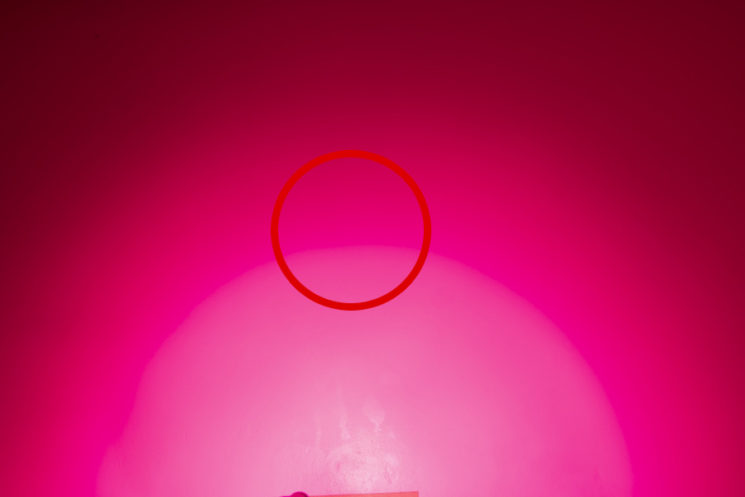 Colour banding is ugly in that it looks very unnatural. Colour never ‘steps’ like this in real life so when we see it in photos we aren’t impressed.

A lot of us are stuck with speedliits due to budget and I assure you a huge part of this colour banding problem is due to the lights you’re using to begin with. Small lights are like hard lights and thus produce more contrast and saturation and that saturation is what’s causing the aggressive banding. Speedlights are some of the hardest light sources around due to their small size but with that being said, strobes and their harder light modifiers like grids and open reflector dishes will also create this problem so let’s look at how we can reduce it and it certain situations, even eliminate it entirely. 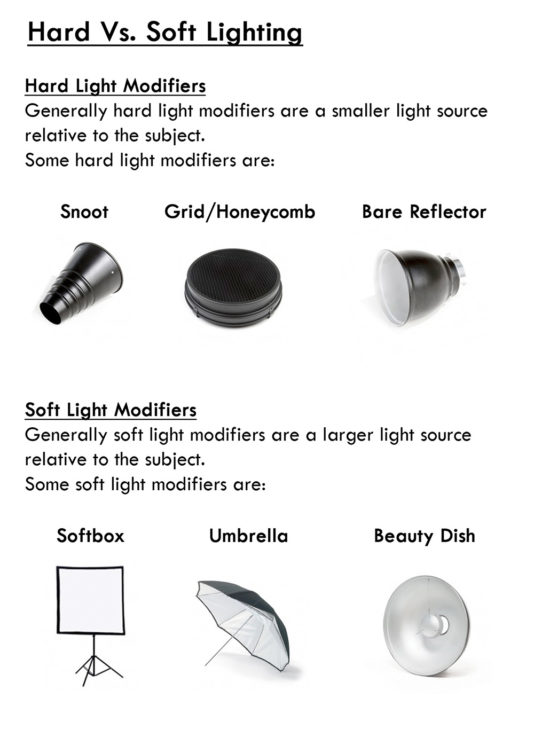 Beyond their obvious larger size over hard light modifiers, soft light modifiers also do not allow any direct light to fall onto the subject. For example a softbox has diffusion built into them, umbrellas bounce the light around their surface prior to it falling on the subject and beauty dishes have that internal diffusion cone that also forces the light to be bounced around before it reaches the subject.

All of these characteristics result in the light not being as contrasty when it reaches its destination and that reduction in contrast also means a reduction in saturation.

Normally you’d be thinking ‘fantastic, saturation is a plus’, but that is not how we want to achieve great saturation in our lighting. The saturation level is achieved by shining a gel onto a shadow, the gels are made saturated when they leave the light, it is in fact poor light placement that ruins saturation not the modifier. But again, that’s a topic for another day, here we want to wrangle the saturation to within a useable level so that we eliminate that horrendous colour banding. So to do this we would need the best of both worlds right? We would want the control and power that a hard light modifier gives us, but we would also want the soft and controlled saturation that a soft light modifier gives us. Is there such a thing?

The Solution to a Soft + Hard Light Modifier

Thankfully there is such a thing and it comes in the form of diffusion gels. Diffusion gels are essentially colourless and heat resistant thick sheets of tracing paper and they can be used anywhere that you’d use your normal gels. To show what they can do, let’s look at a few examples of hard light modifiers at work with and without the diffusion gels in place. 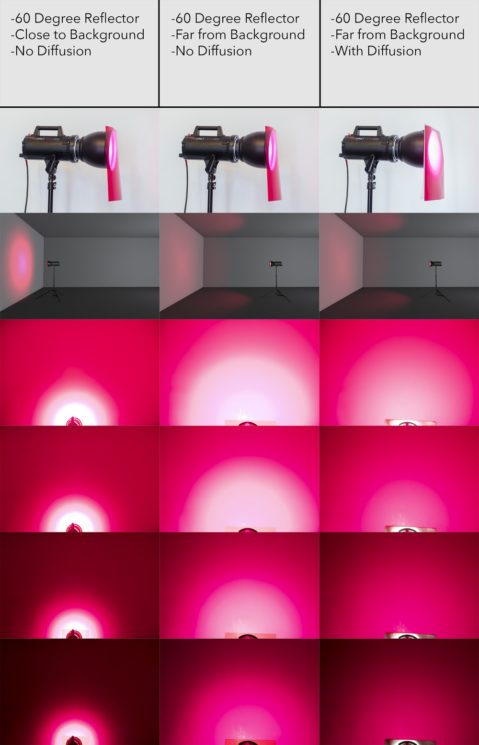 In the images above we can see the result of a standard open grid reflector being shone against a white wall with a pink gel. On its own it produces a very ugly colour banding grad regardless of whether it’s close to the wall or further away from it. But by adding a diffusion gel, you immediately see how that ugly colour banding disappears at nearly all exposure ranges. Even when it’s clearly very overexposed, it still does a great job of maintaining colour transitions. 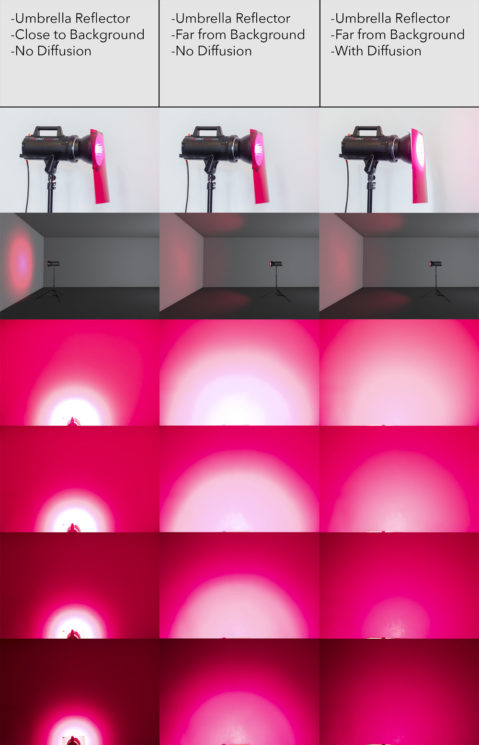 In this set of images we’re looking at the light created by an umbrella reflector dish. These dishes are usually coated with a mirror-like silver interior to work in conjunction with the umbrellas. They are not really designed to ever be shone directly onto a surface and as a result they produce some of the ugliest colour banding around. But even with that mirror-like interior, the diffusion gel does an excellent job of diffusing the light to reduce even the worst colour banding. 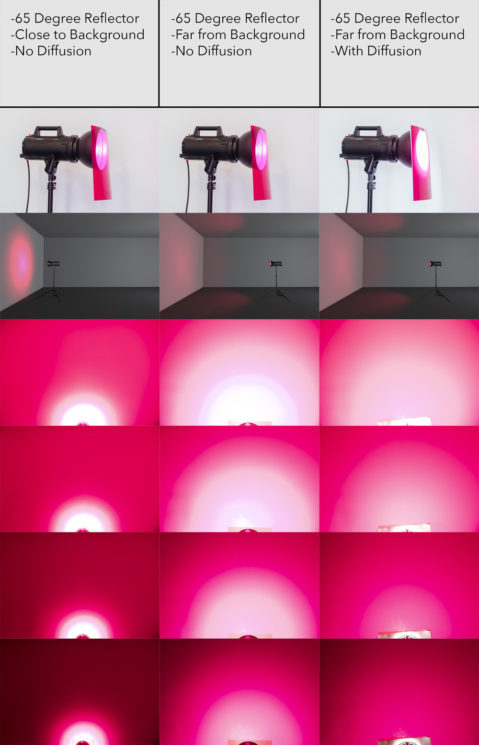 Here I wanted to show what we would normally use as reflector dish on a background. This is the far wider spread of a 65 degree dish or Maxilite as theyre often called. Even though this is what I use to light my backgrounds, they still produce a horrendous amount of colour banding regardless of whether they are close or far from it. The addition of a diffusion gel certainly helps to get it under control though and at low powers, this combination of wide dish and diffusion gel can produce some excellent and smooth background colours.

I also wanted to include this last test as an example of how a 60x60cm softbox can eliminate colour banding nearly entirely. This softbox has two layers of diffusion, one internally and one externally. As a result, we get buttery smooth graduations in colour. So why not use this all the time? Well as a result of using a softbox to light the background, the entire room is now bathed in pink which makes for a real problem when it comes to lighting our subject.

So what can we take away from the above tests?

Lastly, I appreciate this is a test against a white wall and not a model, but trust me, the exact same principles apply whether it be a background or a model. Using a diffusion gel on your hard light modifiers will always reduce colour banding issues.

Where can I get me some Diffusion gels?! 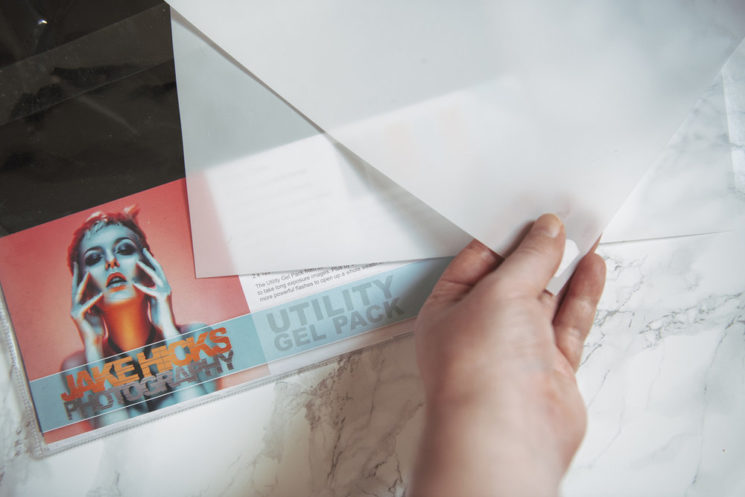 But if you’d like to know which ones I personally use then it’s pretty simple, I actually use the diffusion gels out of my very own gel packs. As a lot of you know, I sell my own gel packs, my ‘Definitive‘ pack has all the saturated colours I use, the ‘Pastels‘ pack has all of the softer colours I use and lastly my ‘Utility‘ pack contains all of my colour correction gels, neutral density gels, as well as the diffusion gels.

My Utility pack contains two of the heavy frosts so that when they’re doubled up they reduce practically all colour banding from any modifier. Plus they are made by LEE Filters which double coats them with heat resistant layers ensuring they last a very long time on hot lights and in my tests, these diffusion gels do not alter the colour of the light in any discernible way either. More information on these and my other gel packs can be found on my gels page here. Just scroll down to the bottom for the details on the ‘Utility’ pack which can be purchased directly here.

I understand that this whole article has now sounded like an advert for my gels, I even questioned whether I should include this section at all for fear of making the whole thing just sound like a sales pitch. You guys will have to make up your own minds on that but I will just say that the tests done here and their results should speak for themselves and are entirely genuine.

Whether you choose to use my gels or not, I recommend you use some form of diffusion over your hard light modifiers just like I personally do to reduce or even eliminate that dreaded colour banding.

One last bonus tip as I know I’m going to be asked how I gelled my softbox in this test. Here’s how I gel my modifiers with the 8″x10″ gel sheets that come in my packs. 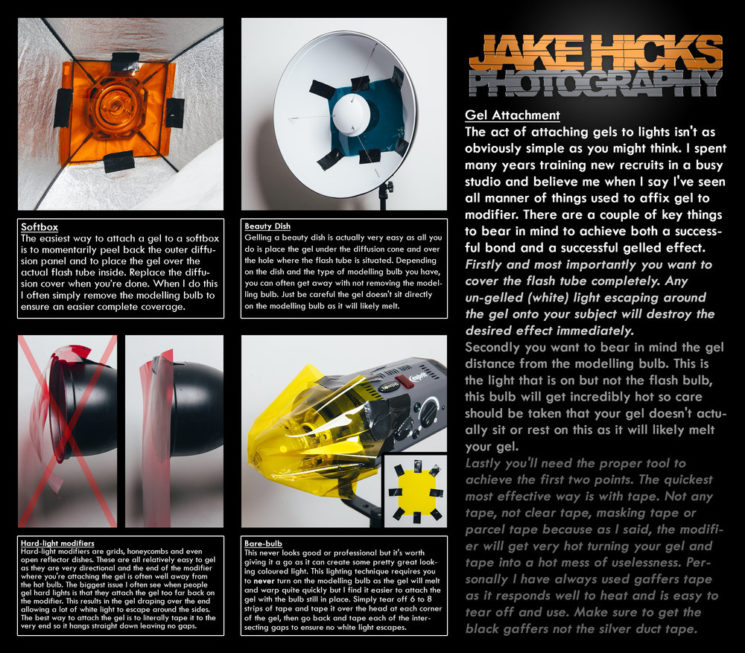 Thanks as always guys for reading this article, I know they’re often fairly long so I really do appreciate your precious time. If something doesn’t make sense or if you have any questions then please don’t hesitate to message me or comment below.