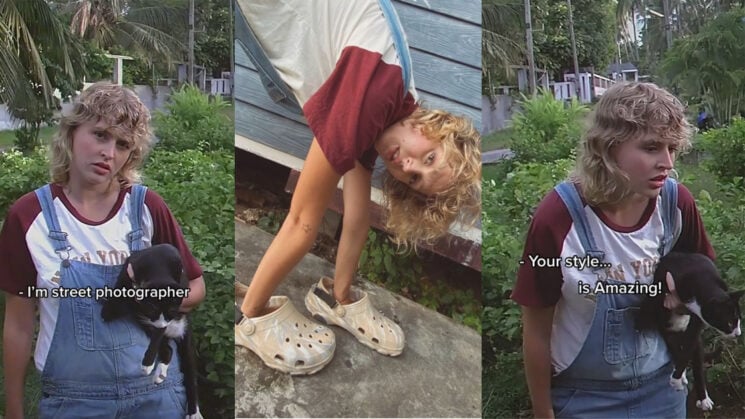 Perhaps you’ve noticed the recent trend on TikTok and Instagram, with street photographers approaching people, complimenting their style, and asking for a photo. I suddenly started seeing a gazillion Reels and TikTok videos like this, and there’s now a trend that mocks it… And it’s absolutely hilarious. I found a couple of videos to share, and I hope they will make this Monday a little better for you as they did for me.

I’ve personally been seeing these videos on Instagram’s Explore, as I spend way more time over there than I do on TikTok. But as it usually happens, I can’t find them when I want to find them. Anyway, the trend is the following: a photographer approaches random people, compliments their style or appearance, and asks them for a photo, filming the entire conversation. Then, at the end of the video, we get to see the resulting image. One great (and very popular) example is @iamjeanblack, so here’s a video from him to illustrate what it looks like.

This new video trend also uses a hashtag #streetphotography, so you’ll see plenty of these tongue-in-cheek videos mocking street photographers and their approach. What I personally find the funniest are the photos they end up with. Some of these almost sent my coffee through my nose!

I don’t think these videos were made to offend anyone, but I find them to be a really fun and utterly hilarious parody. And I hope that they made you smile today!