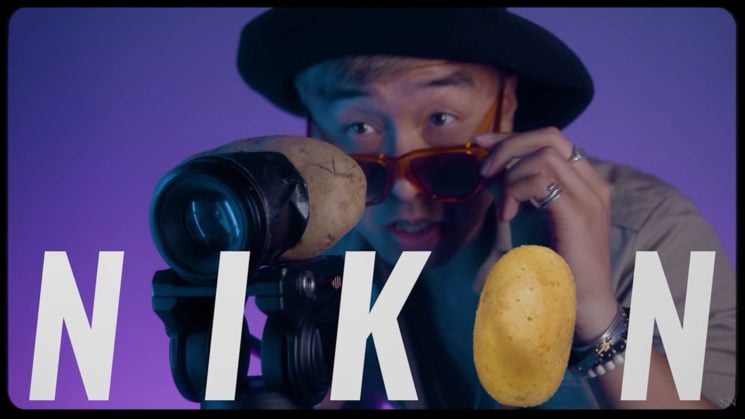 Sam Newton is known for his tongue-in-cheek videos poking fun at other photographers or certain gear. This time, my fellow Nikon shooters, he’s after us! Sam’s latest video jokingly mocks Nikon shooters, calling Nikon “a potato.”

Shoots on Nikon starts with Sam minding his own business and enjoying his day and a glass of wine at a beach. A woman approaches, asking if he could take some photos of her while flirting with him a bit. “Sorry, but I don’t know where my camera’s at,” Sam tells her. “We can use mine, I got one in my camera bag,” the lady responds.

While she’s looking for her camera, Sam wonders if she shoots Canon, Fuji, Leica, or a Sony. And then, the young woman whips out her “Nikon,” which is actually a potato with a lens. “She shoots on Nikon, oh no!”

Sam points out that this isn’t an attack on Nikon shooters, “just more so questioning your life choices.” Since some people can’t really take a joke well, he emphasizes that this is all it is – a joke. “Shoot on whatever camera you want,” he writes. “Nikon please don’t sue me, I’ll sell out in a heartbeat, think of how funny that brand deal would be.”

Whether you’re a Nikon shooter or not, watch the whole video, it will give you some chuckle. And you know what, you actually can take photos with a potato (yes, really). So joke’s on you, Sam! :)