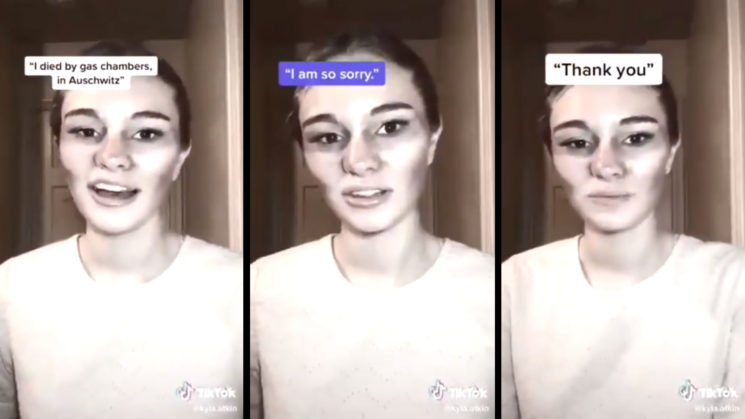 I wish this was some kind of a bizarre joke, but it’s real: there is something called “Holocaust trend” on TikTok. Video creators use makeup to create bruises and injuries and they pretend to be Holocaust victims in heaven. The trend has been spreading quickly, but it has equally quickly caught the attention of the public who has stood strongly against it. Even Auschwitz Museum spoke up against the trend, calling it out for “trivialization of history.”

“The ‘victims’ trend on TikTok can be hurtful & offensive,” the Museum tweeted yesterday. “Some videos are dangerously close or already beyond the border of trivialization of history. But we should discuss this not to shame & attack young people whose motivation seem very diverse. It’s an educational challenge.”

To remind you, the Auschwitz Museum had to intervene once before and educate the public on appropriate behavior in the former concentration camp. But apparently, the folks have moved from walking on the site’s railway tracks to crossing the line of good taste on TikTok.

In their statement, the Museum took a firm stance but tried to explain why trends like this are disrespectful for the Holocaust victims and their families. On the other hand, the public reacted way more emotionally to the whole thing. “Actually horrified #TikTok have allowed this!” Rachel Murray tweeted. “Young girls are pretending to be Jews during the Holocaust. This is vile. It trivialises an inhumane part of history. It is not creative, it’s plain offensive and anti-Semitic #Holocaust”

Actually horrified #TikTok have allowed this! Young girls are pretending to be Jews during the Holocaust. This is vile. It trivialises an inhumane part of history. It is not creative, it’s plain offensive and anti-Semitic #Holocaust pic.twitter.com/WzMF81SOnE

“This is really disturbing.  Not only does it trivialise History, but totally dishonours the memory of the Holocaust and lived experiences of real people,” wrote Laura J. Parkinson. “Trends like this serve to reduce knowledge of why and how Jews were persecuted. Honestly baffled …”

This is really disturbing. Not only does it trivialise History, but totally dishonours the memory of the Holocaust and lived experiences of real people. Trends like this serve to reduce knowledge of why and how Jews were persecuted. Honestly baffled … https://t.co/uaRa5up1JF

I don’t care who you are or whatever your “reason” is for participating in the Holocaust teen on tiktok you are a disgusting human being. Go to a museum if you wanna educate yourself. This is a mockery of the victims and their families and you should be ashamed!

A 17-year-old girl from New Jersey spoke with Insider about the video that she made as a part of the controversial trend. She said that she pretended to be a Holocaust victim to “educate people” and because she felt as if it “was important to share these stories.”

“I’ve always been interested in the history of the Holocaust and just wanted to make a creative video informing people about it on TikTok,” she said in an interview. “It was never intended to be offensive.” But most people reacted fiercely to her and other similar videos, and in the tweets above I only shared a few.

My reaction was similar. Honestly, I wasn’t even trying to be objective. I was overwhelmed by emotions and I was angry. How can someone make cheesy fun clips out of incredible pain and suffering people went through during the Holocaust? I just can’t wrap my mind around it! And don’t tell me it’s “educational,” there are other ways to educate yourself, your peers, your kids, or whomever. Try books, for example, not creating funny lil’ videos on a flashy platform made for those with 15-seconds attention span.

Now that I got this out of my system, I’ll share two of these videos so you can see why I’m so mad. But let me warn you: they might trigger you. In fact, they probably will.

@tiktok_us did these girls really cosplay a holocaust victim and narrative for a tik tok.. such a callous mockery of the genocide of millions of jews and other marginalized groups, i feel sick #Holocaust #tiktok #holocaustchallenge (more to follow) pic.twitter.com/ZeDeddkRQ8

Once again, I can’t believe that someone has made a “trend” from one of the most tragic events in modern history. I do think it’s important to know our history and to be aware of both the good and the terrible events that happened before our time. But putting makeup and acting poorly on TikTok to get likes is certainly not the way to do it.

Photographers, Instagrammers – stop being so damn selfish and disrespectful

Arri joins the vertical video trend – We are all doomed