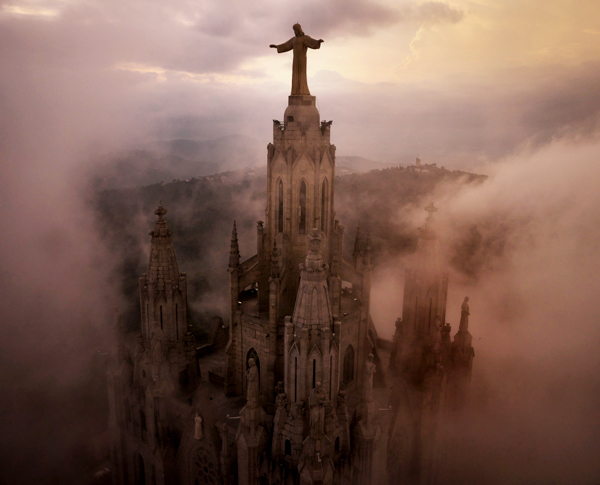 Clouds swirl through the pillars of Sagrat Cor Church, high on a hill above Barcelona.

Drones are more popular than ever and have become rather mainstream as a photography tool, hobby or gadget.

Their popularity however led to restrictive laws and regulations due to privacy concerns, commercial rights and plain and simple dumb operating practices (a drunk pilot flying over the White House comes to mind…).

“Between the introduction of drone technology, and today’s laws limiting or banning their use, there was a glorious period when you could fly a camera almost anywhere”, says Amos Chapple, a Kiwi travel photographer who took these photos.

Below are some of Amos’ stunning photos that could land you a hefty fine or even jail time, should you attempt to take them today.

Knowing it was only a matter of time until the use of quad-copters would be restricted, Amos set on a global journey to capture some of the most iconic sites. Over the course of two years Amos visited 16 different countries including New Zealand, Russia, Italy, Georgia, India, Spain, France, Turkey, The Netherlands and Hungary, and many of his photos are the only ones of their kind.

Although his actions were perfectly legal at the time, Amos told DIYP that he usually avoided attention as best he could and only once did he encounter difficulties with people or police.

“The exception was the Taj Maha,” said Amos, “even very early after the technology’s inception they had rules in place. I had come so far to take the shot that I persisted in sneaking into a hidden take-off point but the police there are extremely diligent and professional. Probably the best security I’ve seen anywhere in the world”. 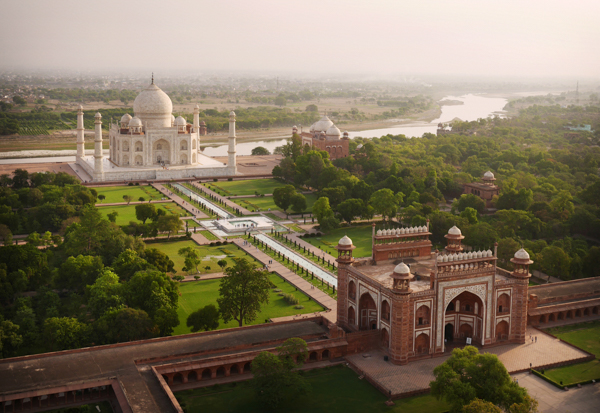 Taj Mahal and gardens as the day’s first tourists trickle in. Security there is incredibly tight and I got busted.

Despite time running out on some of the remaining locations that still allow drone photography, Amos said he is no longer racing to beat the clock, but will continue to use his drone as one of his tools:

“I shoot travel photography with a news element for news media so I’ll continue chasing good stories but I’ll employ the drone wherever I can. I would love to take it into central Asia – the light there is like golden syrup and the silk road architecture would be amazing from above”. 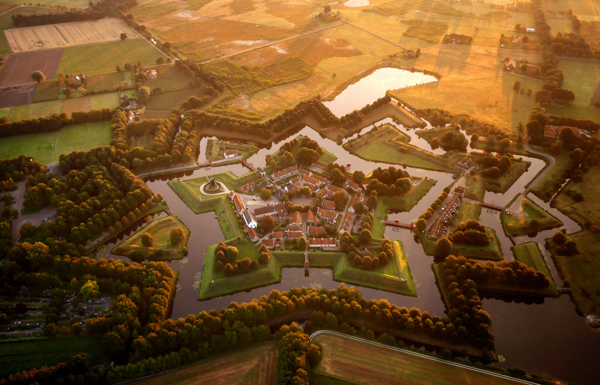 The star fort at Bourtange, Netherlands. Three centuries after the last cannonball was fired in anger at the fort, it now serves as a museum and centre of a sleepy farming village in eastern Holland. The low, thick walls were designed to offset the pounding force of cannonfire.

Amos used a DJI Phantom to capture these photos. The newest version, the Phantom 3, was announced just yesterday. 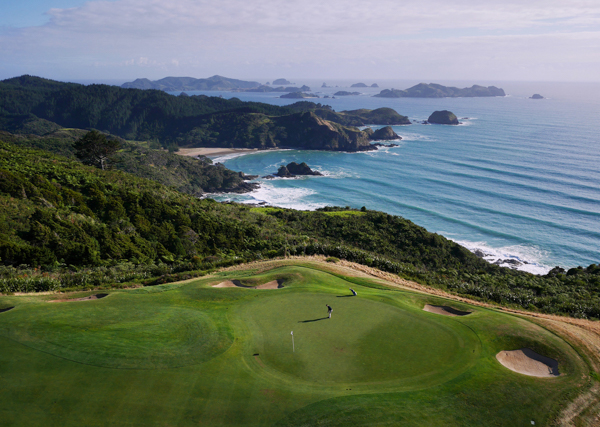 New Zealand, where only the hobbits have a hard time. The Kauri Cliffs golf course, they fly in their caddies from Penn State University. 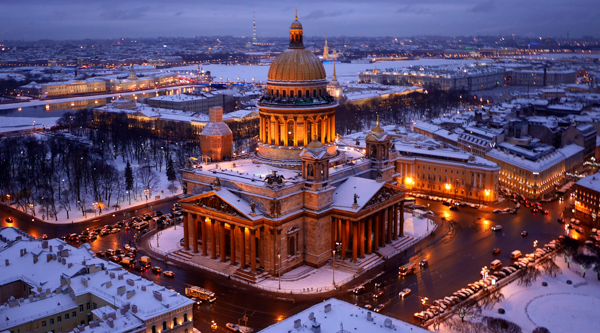 Saint Isaac’s Cathedral, St. Petersburg. Many Finnish laborers were employed in the Cathedral’s troubled 40-year construction, resulting in the Finnish idiom “To build like St. Isaac’s” in reference to something taking far longer than it should. 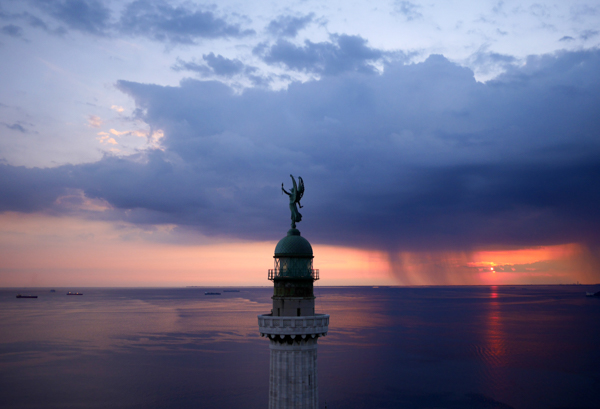 The Vittoria Light, overlooking the Gulf of Trieste at sunset. 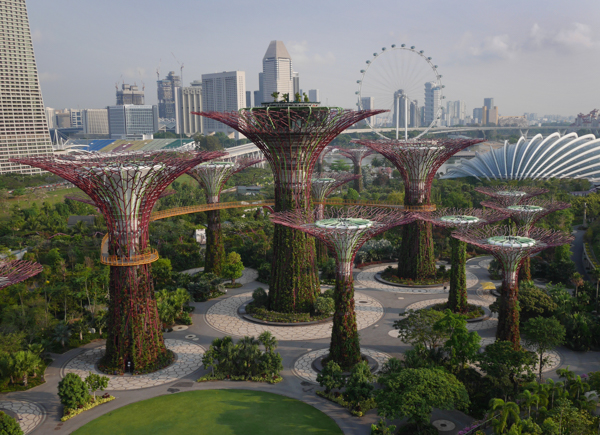 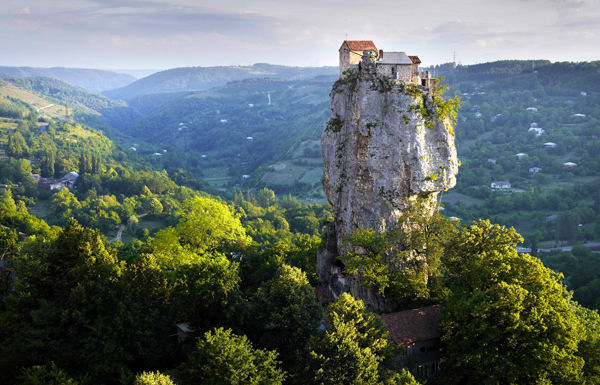 The Katskhi Pillar, where a Georgian hermit has lived for the past twenty years to be “closer to god”. If you look close you can see the ladder. The terrifying ladder which I eventually had to climb. 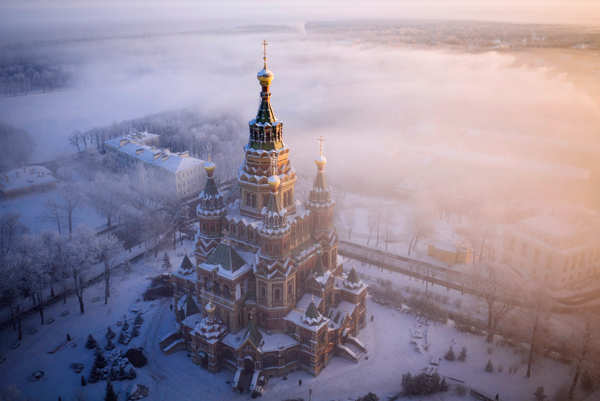 Sts. Peter & Paul Cathedral, Petergof. With tiny little christians walking round the base. 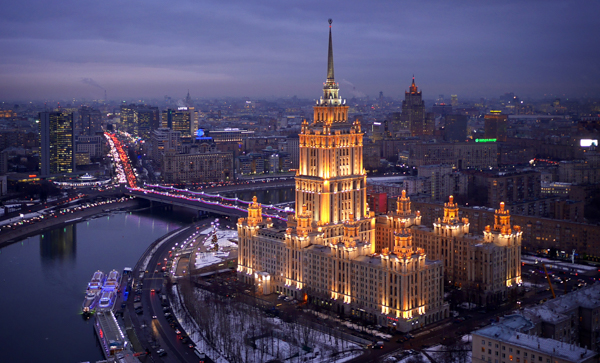 Moscow’s Hotel Ukraina lit up at dusk. This picture was taken as the Russian stock markets crashed on “Black Tuesday”. Little whiffs of panic could be felt on the street. Moscow never looked or felt more like Gotham city. 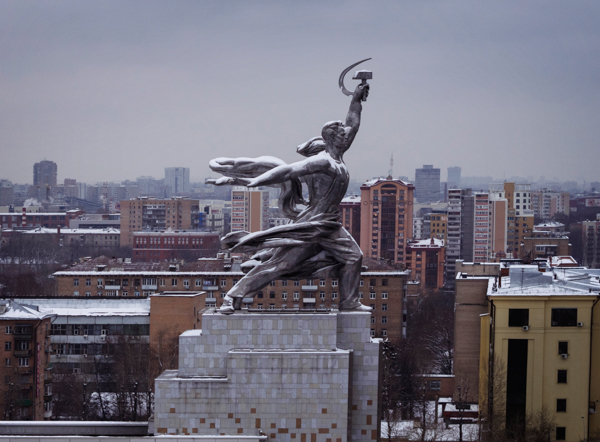 Worker and Kolkhoz Woman striding into the future. Built for the soviet pavilion of the 1937 world fair in Paris, the steel masterwork now stands in the suburbs of northern Moscow. 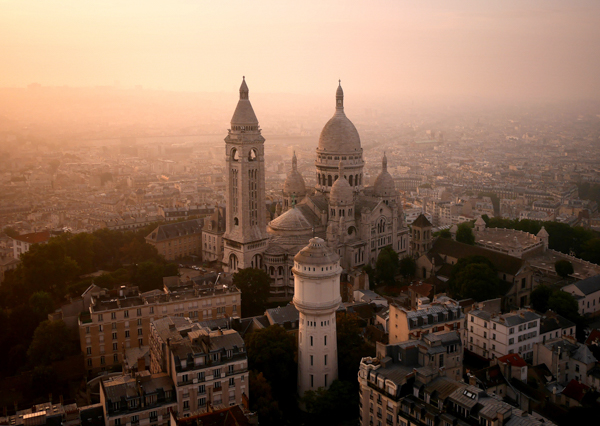 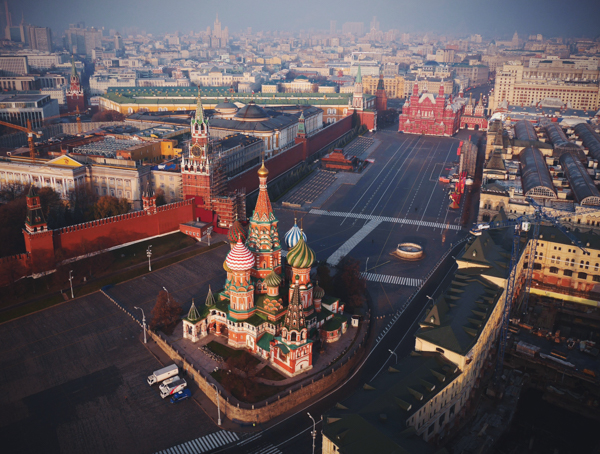 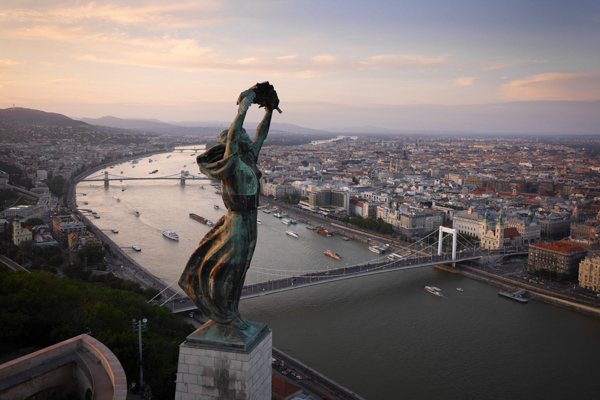 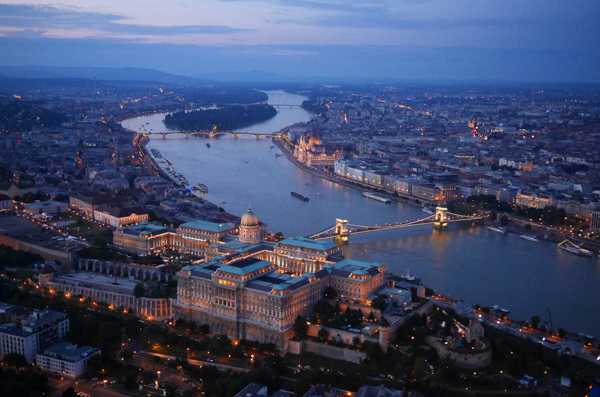 The barge in the centre of the river is packed full of fireworks. An hour after this pic they were sent booming into the night sky to celebrate the country’s national day. 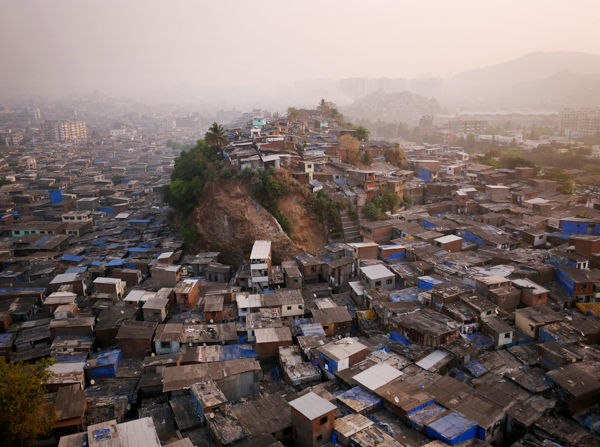 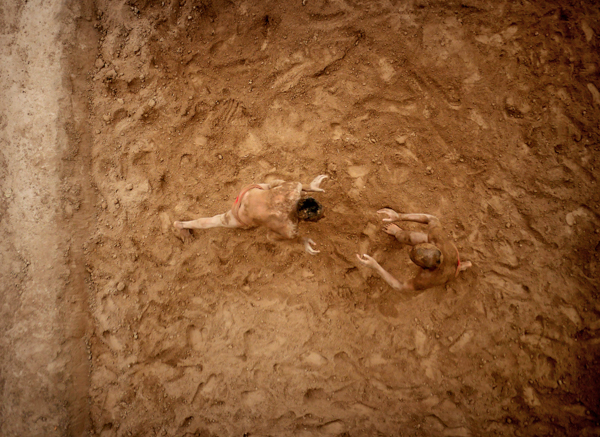 Two wrestlers practising the ancient Indian sport of Kushti. This was right next to the Taj Mahal. A minute or two after the picture was taken two cops heard the noise & marched over. I was detained by a couple of young officers until a bearish senior policeman was dropped off by motorbike. He bellowed at me from behind a walrus moustache & I skulked out of town the next day. 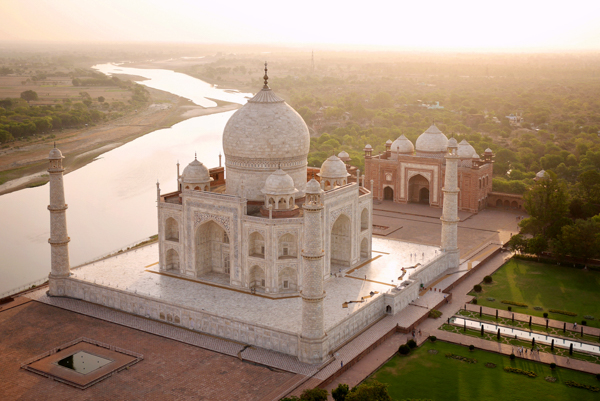 The Taj Mahal in morning light. At the Taj though, things were very different. 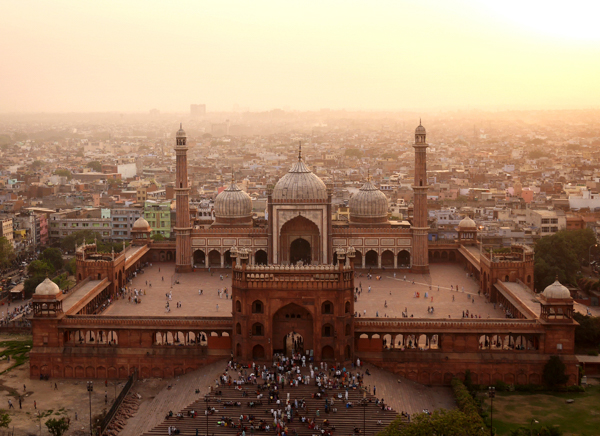 Jama Masjid, the heart of Islam in India. Curiosity got the better of them and I was clear for takeoff. 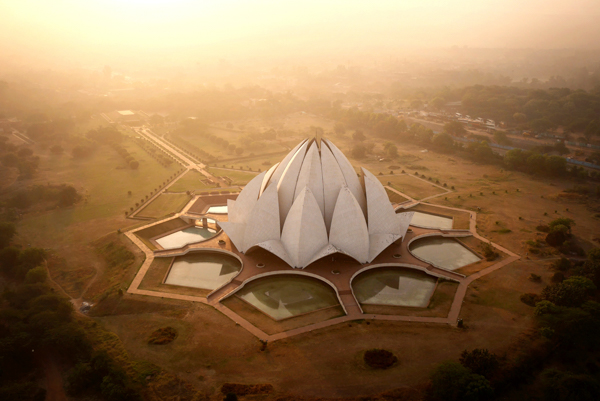 The Lotus Temple, dotted with pigeons at sunrise. 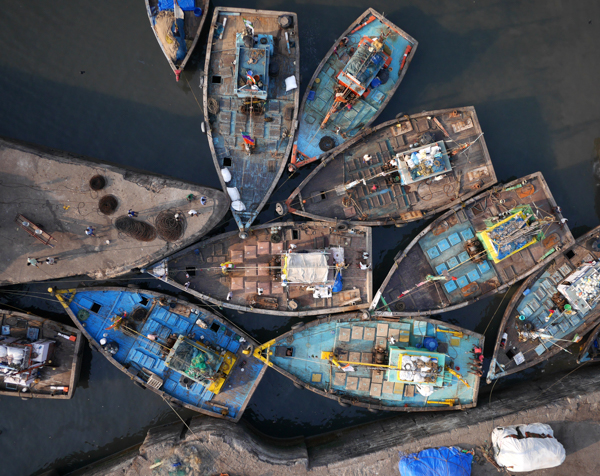 A knot of fishing boats at the entrance to Sassoon Dock, Mumbai. In India I was sometimes told “no photography allowed here sorry”. 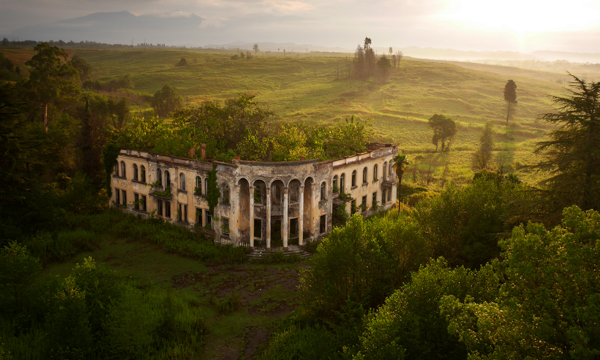 A ruined college inside the breakaway republic of Abkhazia. Ethnic cleansing went down here in the 90s & areas like this one (near Gali) are now a twilight zone of empty buildings and overgrown farmland. 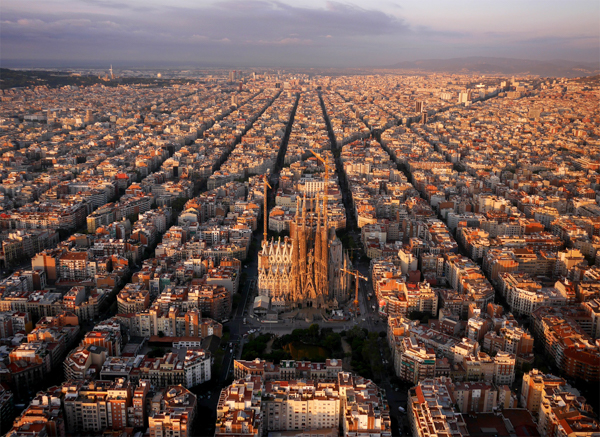 The neatly arranged suburbs around Sagrada Familia, Barcelona. Octagonal city blocks allow for the light, spacious street corners which make al fresco beer & tapas in the town such a delight. 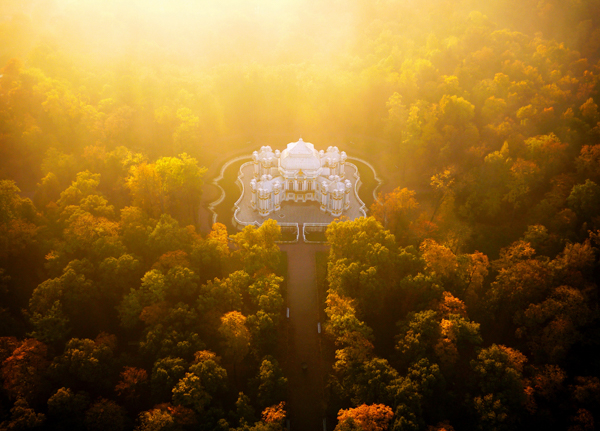 The Hermitage Pavilion, St. Petersburg in autumn mist. I can’t see what the camera is seeing. People find that weird but I quite like the suspense of not knowing what I have until I get the camera in hand. 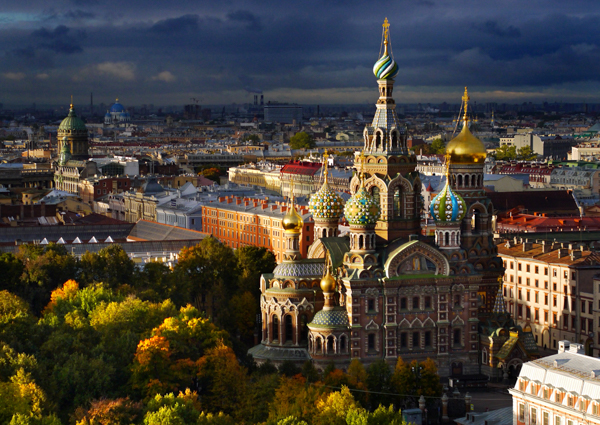 Illegal! Think Twice About Metadata and How You Tag Your Photos Online

The DroneDefender aims to neutralize drone threats and illegal activity

« An Open Letter to People Who Write Open Letters
Sony Gave An Octopus At A New Zealand Aquarium A Camera; Trains It To Photograph Tourists »