Over the weekend Google announced that they were “improving” their Raw conversion services. Even though RAW was there at Google drive for about half a year now, I think that the last change indicated that in addition to going at apple (with Android), at Microsoft (with ChromeOS and Google docs) Google want a bigger piece at the photo market currently controlled mostly by Adobe. 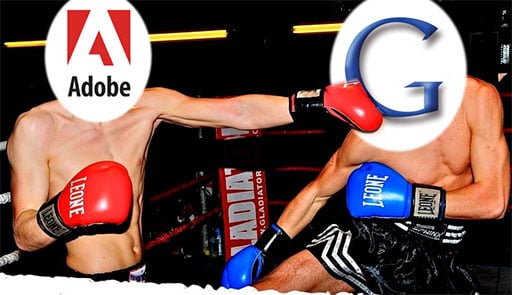 Starting last week Google allows uploading RAW files into GDrive. Sure you could upload a few raw formats before, but now the list of supported RAW is far more complete, and spans over 70 cameras now (but not DNG).

This time your raw will gain editing features from G+’s integrated and ever improving web editor. (remember when Google bought Nik software? I think this is part of a bigger plan).

I also think that this has not escaped the eyes of Adobe. When you come to think about it, Google and Adobe each have their own strengths.

Adobe is strong at anything photo editing related. She is Adobe, queen of the Photoshop. There is very little competition to Adobe when it comes to photo-editing, with Piracy being their strongest threat. And don’t say Gimp. It has been around for ages and while it is pretty awesome, it never posed a real threat or gained ground with either the top end pros or the photo sharing masses. So Adobe is strong at photo editing. But they are miserable on connectivity. Started an edit at home, want to continue at the office. toughs. Want to share a gallery with a client? toughs. Want to sell your photos? toughs.

Google on the other hand is strong at almost everything else, with connectivity being the strongest point. They own mail, sharing, search, storage & payments and while there are competitors to each of those services individually (yahoo mail, dropbox, bing, paypal), there is not one provider who has them all. So Google are pretty strong at connectivity, what they lack is a good set of photography tools (and please… don’t call Picasa good photography tools)

So Adobe went on defense, and started the cloud, which would give it some of the tools Google have before it is too late. Continuous home/office editing; web tools, sharing mechanisms and so on. This is the part of the cloud that seems trivial, I suspect it is set in place to be able to fend Google when the time comes.

So Google had Picasa. It’s a nice service. (Not as Awesome as Flickr though, just nice). Then came Nik.

Nik is not an I-Shot-My-Puppy-Now-Lets-Add-Some-Blur-And-Split-Toning tool. It is big software with quite a lot of brains. Actually, many pros used to use Nik before they were acquired by Google. (maybe they still do, who knows).

It does not mean that Nik can’t prettify your puppies and sun set, they can. But they also have some of the best minds in the industry when it comes to photo editing.

So there you have it, Google adding hard core editing to its arsenal. (and already has the cloud thing in place). And are almost ready to take on Adobe.

What’s In This For Google?

But why? This is the big question, right? Why would Google even try to grab some share of off Adobe, what’s in it for her?

Visual is the new content – I know that everyone says that photography is dead. I don’t think so. I think that it is just the other way around. Photography is now more live than ever. Try and think to a piece of content you’ve seen that did not have a photograph associated with it. I can’t think of one myself. The web is turning visual and whomever has more visual power on their side is at a better place to own the nets make money.

Social Media – G+ is a great network, but it is not even one tenth of Facebook. Bringing photography in can definitely help G+ evolve. Imaging that: Shoot on an Android powered camera, Edit with Nik, Share at G+ and sell via Google wallet. They can own the entire process. With G+ being the center, helping to fight Facebook as place where most interactions happen on the web.

From Google I believe we will see much tighter integration of photography workflow, they will push photo editing levering Nik. One option is to add more “simple” editing options to their current editing tools.

Maybe offering a G+ photo-edit pack which will be cheaper than Nik (currently $149) as long as you use it online?

At the future though, I believe that Google will compete directly with Adobe for the photo-editing market. Weather with Nik, with an improved Nik or with something new altogether.

[illustration based on photo by Claudio Gennari]