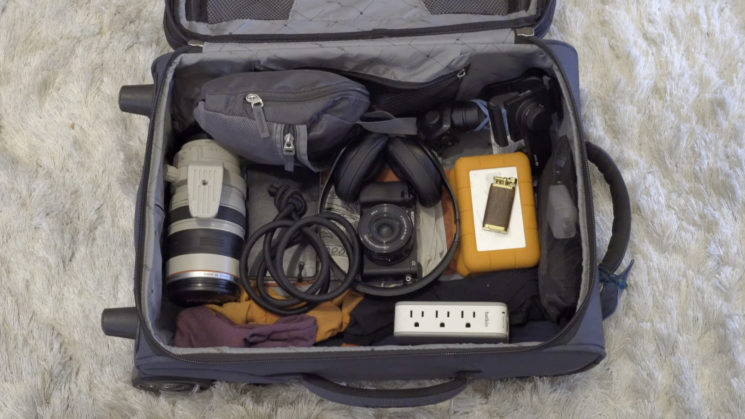 Travelling with gear can be a major pain. Usually, I tend to travel with gear to cover events, so I have to pack a lot of it. But when I’m just travelling for myself, perhaps to visit friends, I generally pack pretty light with my camera gear. It’s easy to overpack, though, if you’re not careful. We often want to take all the gear we own, “just in case”.

In this video, Robby Serrini at TravelClast shows us how he travels with camera gear as a professional travel writer, and the extra items he takes with him to help make his life a little easier while he’s away.

Robby usually takes only two bags with him, both of which he carries on the flight. One of them is a Lowepro Fastpack, which is his personal item. The other is a Travelpro Luggage Crew roller, which he says is “borderline indestructible” and is the brand most commonly chosen by flight crew.

Personally, I like the Lowepro Photostream SP200 as my carry on, and the new Manfrotto Advanced2 Hybrid Backpack (review coming soon) for my personal item. But I’m generally taking more gear with me than Robby does. Even when I’m not, though, the Photostream SP200 can carry a lot of regular non-camera gear once you remove the dividers.

Robby’s gear list is fairly small, though. Although it works well for him and covers his needs. It includes some of the expected items like a Sony A7R III, 24-105mm f/4 G OSS lens and a DJI Mavic drone, but also a few other less common items, like a lighter (remember to abide by the liquid rules when going through airport security), bandanas, an ultralight backpack that folds away into a small pouch, Global Entry card (only really valid if you’re based in the USA), Alka Seltzer, a notebook and pen (the batteries last forever) and a power strip. Oh, and bandanas.

For the power strip, I use universal power strips that contain sockets compatible with multiple plug types and then have the plug on the end for whatever country I’m visiting. My own gear and chargers are a mix of UK, EU and US plugs (I try to travel with US plug cables wherever possible because they’re smaller than UK ones). I have several strips each with a plug on the end for a different country and pack whichever one matches my destination.

Exactly what you’ll need to pack will depend on your own needs, but you can do a lot with a little and hopefully, Robby’s video gives you some ideas on how to pack less, but still be able to give you all you need.

What to Carry; How to Pack; Where to Travel