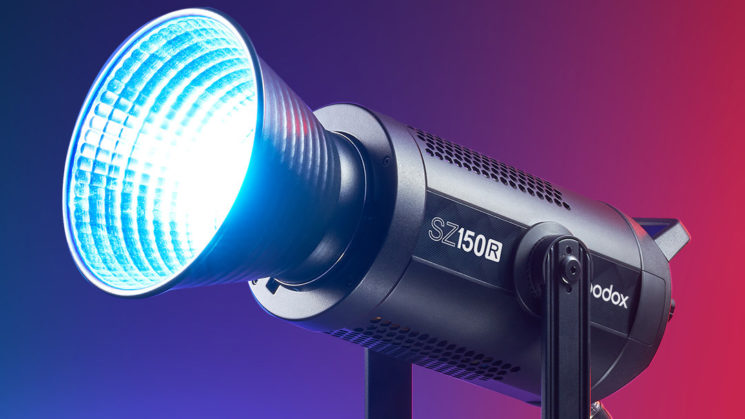 Godox has launched its new Godox SZ150R LED light. It’s both RGB and bi-colour offering a range from 2800K up to 6500K with high CRI and TLCI ratings of 97 and 96. It has a number of control options, including onboard controls, the RC-R9 remote, a smartphone app as well as DMX control. And, as with most new Godox lights, it comes with a silent mode feature to eliminate fan noise!

And while the fact that this Bowens-mount LED light is both bicolour and RGB is pretty awesome, what’s particularly interesting is that the light on this is zoomable, offering an adjustable beam angle of between 20° and 65°. 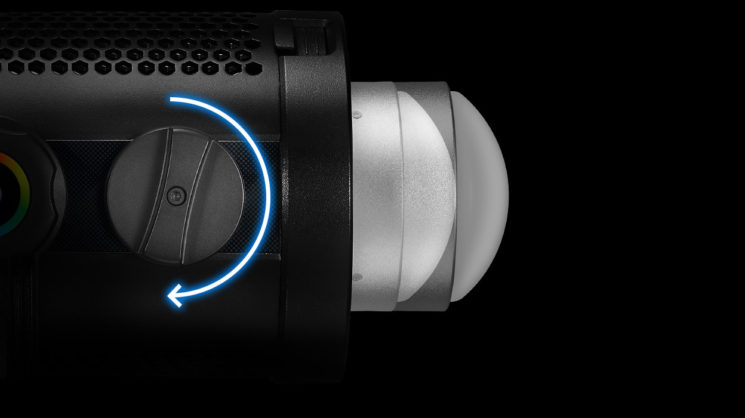 The zoomable aspect of this head allows you to switch between a fairly tightly focused 20° beam or a somewhat wide 65° spread with just the spin of a dial. This makes it great for tailoring the angle of the beam to better suit different modifiers you might choose to use, and minimise lost light that’s absorbed and reflected while also providing better spill control.

As well as bicolour white LEDs, the SZ150R is also an RGB light, allowing you access to up to 36,000 colours through the use of HSI mode which lets you adjust the hue, saturation and intensity (brightness) of the light’s output letting you mix the different channels however you wish. It also features green/magenta control to help you dial in perfect skin tones to help match multiple light sources.

As we’d expect, the SZ150R comes with a number of different lighting effects. Thirteen, to be precise, including RGB cycle, flash, laser, lightning, broken bulb, TV, candle, fire, firework, police car, firetruck, ambulance and SOS. And a USB socket on the back allows for easy firmware upgrades via USB stick, so we may see more coming effects modes in the future, along with tweaks to the firmware.

To control the light, you’ve got the option to use the onboard controls on the back of the LED light, or you can use the (optional extra) Godox RC-R9 remote control. If you don’t want to buy a separate remote, you can also use the Godox Light app on your smartphone. And if you’ve already got an existing lighting setup that utilises DMX, then don’t worry, the SZ150R supports DMX control, too.

Unfortunately, the SZ150R isn’t a battery-powered light, and requires 100-240v AC power in order to function. So, it’s not a portable light, but given that this is (I think) their first Bowens mount RGB LED light, I think we can forgive that one. It’s the first in a new breed of Godox lights, and I’ve no doubt they’re working on a battery-powered equivalent, given the reputation for portable strobes and LED lights that Godox has.

The Godox SZ150 will be available to pre-order soon for a price of around $559. There’s no word yet on exactly when it’ll be released, but when it is, it’ll come with a lamp cover, Bowens mount reflector, AC adapter, and various other accessories inside the included carrying case (and if it’s anything like the carrying case on the Godox ML60, it’ll be really nice).

We’ll update this post once we know more about availability. For now, you can find out more on the Godox website.

Update: The Godoz SZ150R is available to pre-order now for $599 and is expected to start shipping in February.

« Landscape photographers, here are six cheap items to always carry in your camera bag
Nickelback teams up with Google Photos to make a parody of their own song »