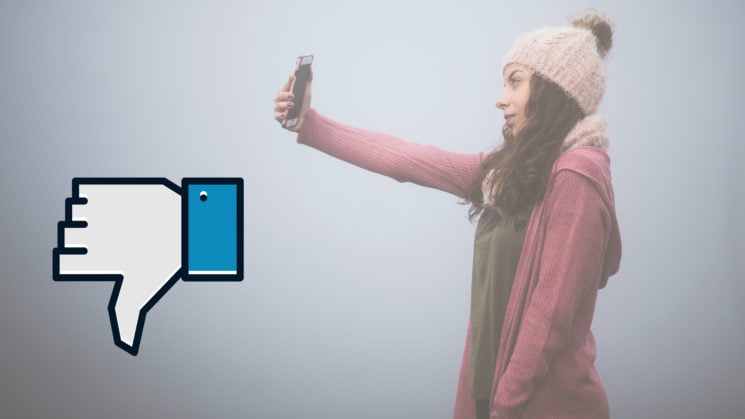 Selfie is a phenomenon so frequent in the 21st century that it has inspired quite a few psychological studies so far. The latest one was conducted Washington State University psychologists, comparing people who post selfies and those who post photos taken by someone else. Will it surprise you if I say that the result is not encouraging for frequent selfie posters at all? According to this study, those who frequently post selfies are perceived as being “less likable, less successful, more insecure and less open to new experiences” than those who post photos taken by others.

Chris Barry, WSU professor of psychology and lead author of the study, started researching the topic around five years ago. According to WSU, this was the time when people who take lots of selfies were considered narcissists. Barry conducted two studies which would put the popular theory to the test. He investigated potential links between posting lots of selfies and narcissism, but the research was “inconclusive,” as WSU explains. However, this gave Barry another idea. What if posts on social media don’t actually tell about someone’s personality, but about how other people see them? So, Barry and his team designed another study to examine this topic.

In this study, Barry, WSU psychology students, and collaborators from the University of Southern Mississippi compared two types of social media users. As I mentioned, one group of posts contained more selfies, and the other one included more photos taken by someone else (or “posies,” as WSU refers to them).

Barry and his team worked with two groups of students. The first group consisted of 30 undergraduates who were asked to complete a personality questionnaire. They and agreed to let the researchers use their 30 most recent Instagram posts for the experiment. “The posts were coded based on whether they were selfies or posies as well as what was depicted in each image, such as physical appearance, affiliation with others, events, activities or accomplishments,” WSU explains.

The second group of students consisted of 119 undergraduates from another US university. They were asked to rate the Instagram profiles of the first group, relying only on the images from their profiles. The rating was based on 13 attributes such as self‑absorption, low self‑esteem, extraversion, and success.

After the rating was done, Barry and his team analyzed the data. This time, they got more conclusive results. “Even when two feeds had similar content, such as depictions of achievement or travel, feelings about the person who posted selfies were negative and feelings about the person who posted posies were positive,” Barry said. “It shows there are certain visual cues, independent of context, that elicit either a positive or negative response on social media.”

According to the results, people who post a lot of selfies are “almost uniformly viewed” by others in a more negative light. The second group of students rated them as “less likable, less successful, more insecure and less open to new experiences.”

There are several theories Barry and his team offer to explain the results. First, when people post “posies,” those photos seem more natural and “similar to how the observer would see the poster in real life.” Therefore, observers rated these photos higher. Another explanation is that a person would post far fewer selfies than posies. Therefore, when an observer would see a selfie, it could signal something strange or unusual about the poster.

Barry said that there could be “a variety of motives” behind people’s need to post selfies to Instagram. However, when it comes to how those photos are perceived, it seems that there’s a more consistent pattern. “While the findings of this study are just a small piece of the puzzle, they may be important to keep in mind before you make that next post,” Barry concluded.

I have nothing against selfies, as long as they stay occasional. I don’t mind seeing them in my feed sometimes, or snapping them myself (although the latter one is pretty rare). However, I personally believe that there’s something wrong with people who post selfies too often, especially if they always add a bunch of filters which make them look unnatural. After all, a mental disorder named “selfitis” is now a thing, so this may not only be my personal opinion.