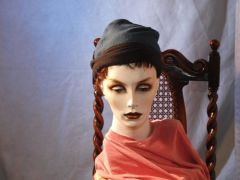 When I was a young manager, I went to my boss once, and bitched about a resource cut down and the fact the marketing was imposing a hell of a schedule on us poor R&D guys.

I really liked his response and even though it did not get me more resources it gave me good directions on how to make a plan. He looked straight into my eyes, patted me on the shoulder and fiercely said “Any manager can do more work with more resources; only good managers can do more with less“. Okay, strike the shoulder and fierce thing, this is just my father complex kicking in.

However, the same idea also applies to photography, and especially starting photographers where big dollars equipment is rare.

In the story below Martin Kimeldorf (Flickr) shares a lesson on making more with less. Actually, Martin managed to double the amount of light sources he has with just a bit of imagination.

In this example I made my own V-cards or Book End reflectors. I used something a bit smaller, a 3 x 6 foot white corrugated material. That I can get in my vehicle. As you know, Studio V cards can come in as big as you can get make ’em.

And sometimes for me DIY becomes a blend. In this case I modify and existing product  to fit my situation better. To that end I recently modified a PressLite Vertex by creating a new base for it. This meant cutting off the top of a dome diffuser and fitting the PressLite to it. That way I can quickly mount and dismount this specialized strobe modifier as I go. I also have made a similar modification to a lumiquest softbox. 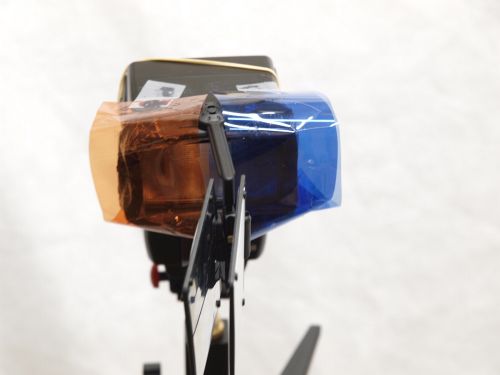 And other times DIY means doing more with less. A good example is the home studio DIY theme recently appearing here on DIYP.

In the example pictures I’m trying to use 2 strobes to create some interesting light that might normally take 4 different lights. Here is setup: 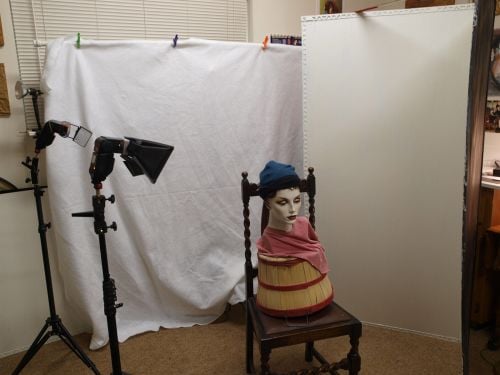 First double power is done using a PRESSLite Vertex. If you closely look at the strobe on the back left, you’ll see that one half is gelled blue and sent to a home made backdrop stand. The forward side of the strobe is gelled with CTO to case a warm glow and sent to the ever moving model mannequin side/back for rim light.

Then I added a double gelled lumiquest softbox to further illuminate the scene. Here is the nice thing. The light from the lumiquested flash can be played with:

In the first image I did not do a thing – light falls as it may. 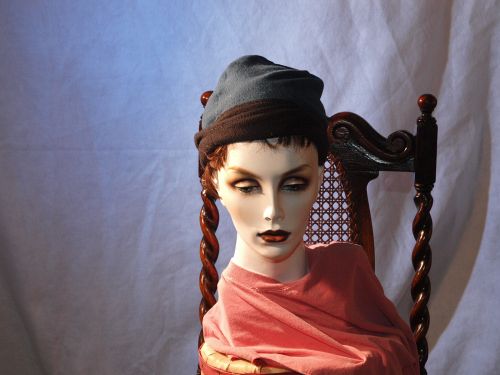 In the second image I forced no light at all from the right side by using the dark side of the v-card. 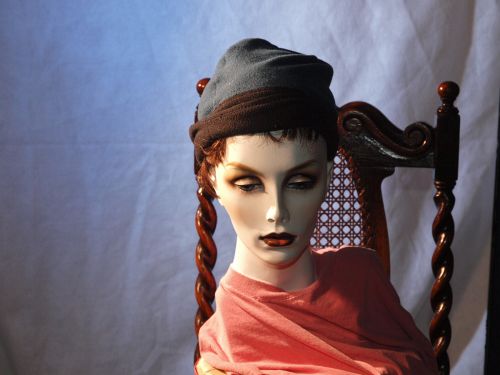 And lastly, I reflected some light back to the mannequin by using the reflecting side of the v-card. 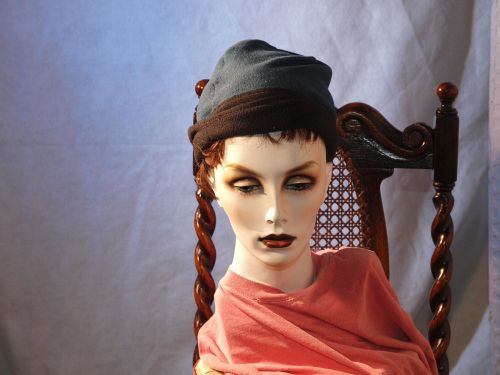 Lastly, here is an image of the setup while strobes are firing. It is the best way to see the split Vertex effect. 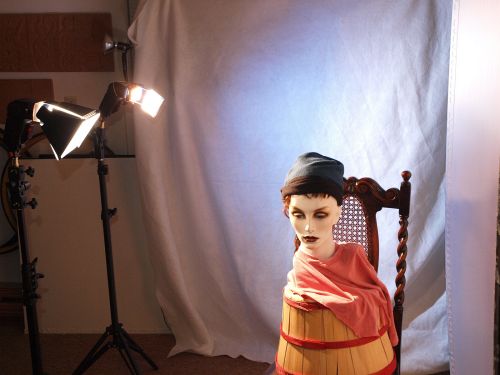