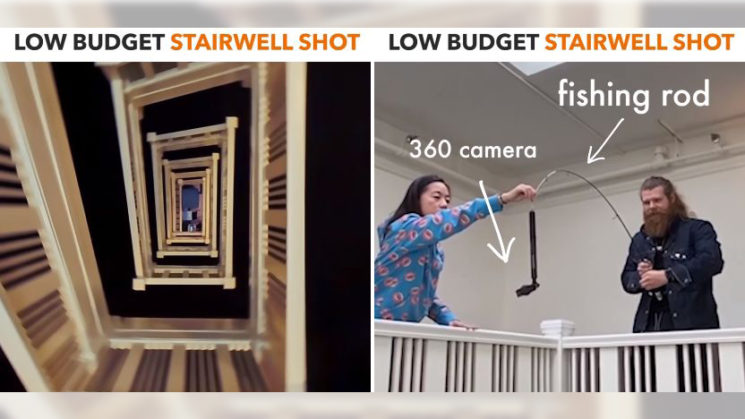 We love DIY camera tricks, and 360˚ cameras open up a whole new world of possibilities. Director and filmmaker Karen X. Cheng has some brilliant ideas for camera movements that look darn epic, yet they require virtually no budget. Grab your 360˚ camera, some stuff you probably have at home, and let’s dive in!

Karen shared a compilation of five camera movements she pulled off, using an Insta360 and some pretty effective, yet simple tricks:

Karen also shares some details about how the scenes were filmed:

1.Low budget fight scene – the camera is strapped to a chest mount, and as you can see, a chair is used to have cameraman go backward.

2. Low budget dolly zoom – for this one, Karen says that she relied on the optical stabilization of the camera and there’s no gimbal. The camera was attached to the end of a selfie stick for this one. As for the dolly zoom effect, it was done in post using After Effects.

3. Low budget stairwell shot – this one is my personal favorite and it’s so darn trippy! All it requires is a camera, a fishing rod, and a staircase. “You might’ve noticed that the camera is spinning quite a bit, but the footage is stable, Karen writes:

“A year or two ago, it wouldn’t have been possible to do this shot with a fishing rod (or at least, it would have been very difficult) because of how much the camera spins when dangled on a single flimsy string. But over the last year, optical camera stabilization – and particularly 360 camera stabilization – has gotten insanely good. All those rotations you see the camera doing were automatically removed by the camera, leaving one glorious stabilized shot.”

4. Low budget Interstellar shot – remember the ocean wave scene in Interstellar? This effect is anhomage to it and it requires a 360˚ camera on a selfie stick. You can easily create this reverse tiny planet effect on your iPhone, and that’s exactly what Karen did.

5. Low budget drone shot – this is a trick we’ve already seen (here too), but Karen did a smashing job with some help from Ryan McDowell. The camera is on a telescopic 10-ft stick, and all the tilts and pans you see were actually added in post. That’s because the camera is 360 you can edit the footage to make it look in any direction.

Karen often shares some epic videos, tips, and tricks, so make sure to see more on her Instagram and Facebook. I’m sure you’ll love it!

100 camera angles, shots and movements in 10 minutes for filmmakers and photographers

« Canon already working on an RF 70-200mm f/2.8 Mark II lens with internal zoom?
Ariana Grande is being sued for posting a photo with no permission. Again. By the same photographer »