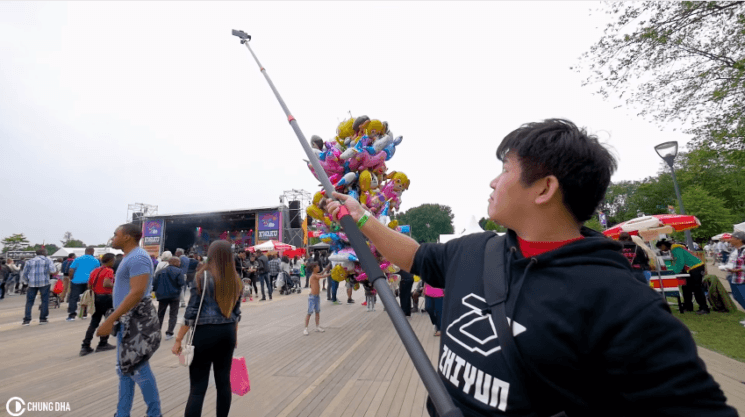 If you own a drone, there will be situations and areas when you won’t be able to fly it and get aerial shots. In such situations, there’s a great solution how to fake aerial shots using your phone. Photographer and filmmaker Chung Dha demonstrates the build for faking aerial shots in his video, along with some tips and techniques how to get the movements you’d otherwise get with a drone.

It’s a clever solution when you can’t fly the drone, and not to mention if you’re one of the people who don’t own a drone (yet). So, get yourself a gimbal and a boom pole, and get to work.

Chung uses  Andoer 16ft carbon fiber boom pole paired with Zhiyun Smooth 3 3-axis gimbal. He shoots with his smartphone Samsung Galaxy S8. This build could hold up an action camera, a phone or a compact digital camera. All in all, you have to mount a lightweight camera onto the pole, as it wouldn’t easily hold up the DSLR or a mirrorless camera because of the weight. After all, it probably wouldn’t be easy to hold and direct the camera either.

He records the crowd and the stage at a festival. He wouldn’t have another way of taking aerial shots here, as it’s a no-fly area, and you generally shouldn’t fly above people. In the video, you can see a couple of techniques to mimic the drone shots.

First, he makes the tracking shot. He locks the gimbal and holds the pole at 45-degree angle, slowly moving the build to the side.

Next, there’s the pedestal up shot. You can do it by lifting the pole up, but there’s a trick to it. You should walk forward while tilting the whole setup. If you only tilt the pole up, the camera will also move backward. But, if you slowly move forward as you lift the pole, the camera will stay in approximately the same place where you tilted it from.

Finally, to get the dolly shot, Chung advises you to work on your “Ninja walk.” Hold the pole at the same angle, and try walking forward slowly and smoothly to avoid up and down movement in your shots.

Even though this is safer to use in large crowds than a drone, still, make sure not to poke someone’s eye out. And of course, prepare for a few strange looks, and comments like “that is a big selfie stick.”

« Watch 115 years of color film evolution in only 4 minutes
Google AI now takes professional photos. And it does it based on Street View images »