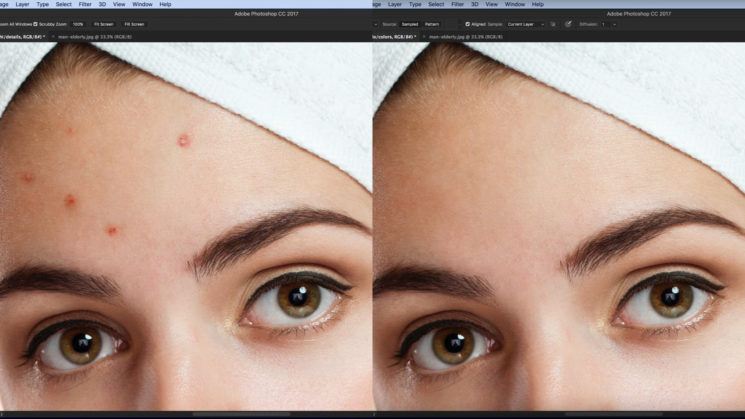 No matter who we are, our skin isn’t perfect. It’s just a fact of life. The odd zit here and there, a little scratch, perhaps a single stray hair. There’s always something. So, for portraits, temporary blemishes usually need a quick touch up. Fortunately, such issues are easy to fix in Photoshop. Or, more accurately, Photoshop offers us several easy fixes.

In this video, Nathaniel Dodson from Tutvid shows us five different ways to get rid of them. Each of the techniques shown has its advantages as well as its down sides. Nathan talks through make the most of them and overcome the potential problems. He also explains how these techniques can be used on other images besides portraits, such as landscapes.

Unless I’m shooting on film, a quick tidy up of temporary skin blemishes is something I need to do to virtually every photo. The Healing Brush Tool is my typical go-to for this from within Photoshop. But there are things we can do before the image even comes into Photoshop. Having several options is handy, though, is very useful, as you’re not always going to get the same results on every image.

Adobe Camera Raw is my first stop for blemish removal. I try to clear as much as I can in ACR before the image even comes into Photoshop. Sometimes I can clean it up entirely in ACR and don’t need to do anything further in Photoshop at all. 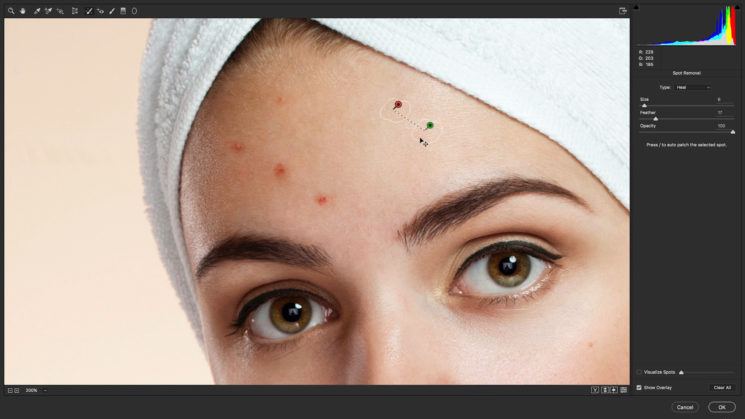 Nathanial already has his image inside Photoshop, so he turns his layer into a Smart Object and then runs the Camera Raw Filter. He makes it as a smart object so that the changes are non-destructive. He can get rid of them, or modify them at any time. Personally, I always bring raw files into Photoshop as Smart Objects to begin with, so simply double clicking the layer brings up ACR.

The spot healing brush tool is a semi-intelligent (which also means it’s semi-stupid) way of getting rid of blemishes on your subject. The trick with using the Spot Healing Brush Tool, and similar tools, is to create a new layer on which to make your changes. Then you set the tool to look at all of the layers below it to make the changes. This way, again, you’re working non-destructively. If you screw something up, you’re not having to hit CTRL+Z a bunch of times (possibly undoing work you would like to keep). You can simply erase from the top layer to reveal the original below. 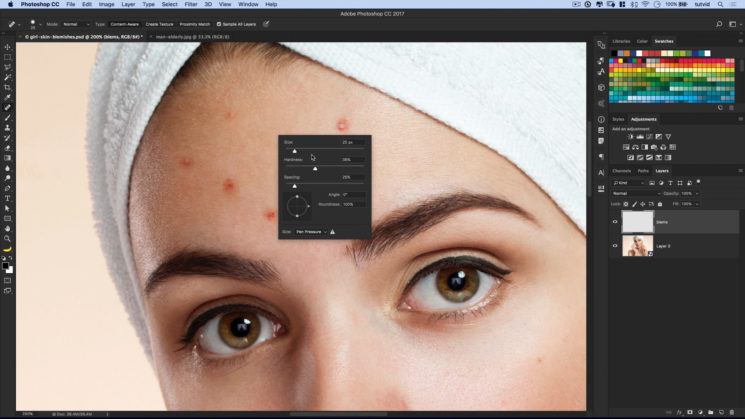 Personally, I’m not a big fan of the Spot Healing Brush Tool. I find it often tends to pick a completely random part of the image to generate texture. Or, it’ll attempt to create something that’s just a blurry soft mess that doesn’t match the surrounding skin texture at all. So, your mileage may vary. But this is where the next option comes in.

The regular Healing Brush Tool is my first stop once inside Photoshop. It just makes it so easy to quickly get rid of things accurately. Because you can choose the source from which it takes its information, it offers a lot more control than the semi-automated Spot Healing Brush Tool. It also shows you a little marker as you paint so you can see when you’re reaching the edges of your source. 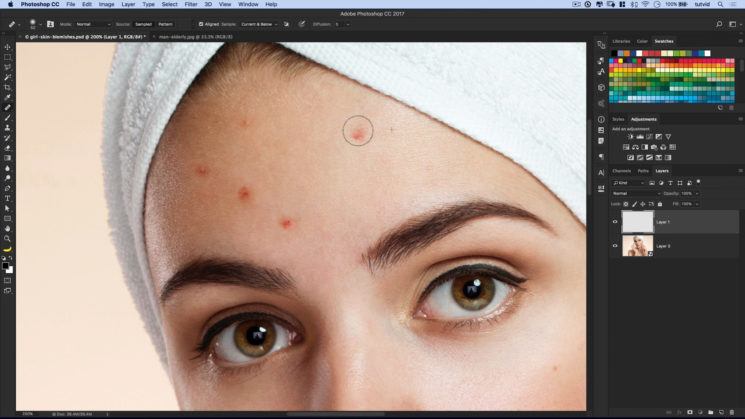 The Healing Brush Tool also allows you to get some tricky areas, like high contrast edges. In the image here, is a section of towel against skin. With the Spot Healing Brush tool, this can be difficult to, say, remove a stray hair that’s poking out. But because you are able to select the source, you can select a clean edge further down the towel to heal over the hair further up.

Definitely a favourite for me.

The Patch Tool can be extremely handy, but it’s not without its issues. The Patch Tool essentially allows you to select an area using the regular selection tools, and then you can drag that selection over to another part of the image to use as your source. The problem is, you can only use it this way when you’re drawing directly onto a single layer. There is a way around it, although I don’t find it that great. 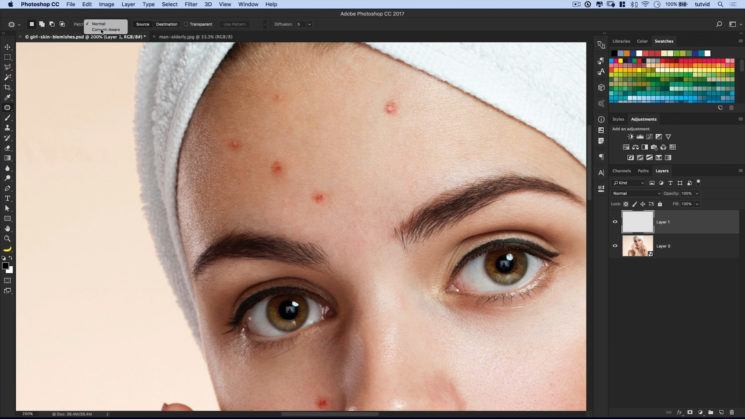 I’ve never been a big fan of Photoshop’s content aware features, and unfortunately, that’s the only way you can use the Patch Tool non-destructively. When you switch the Patch Tool over from “Normal” to “Content Aware”, you suddenly get the “All Layers” option, meaning you can use it non-destructively. But then you lose the control of your source area, which, to me, is the whole point of this tool. And you also start to see the issues I mentioned with the Spot Healing Brush Tool.

I think it’s one of those things that photographers and retouchers either love or hate, and I’m not really on the love side.

This has become a very popular technique for all kinds of things over the last few years. It’s a technique that’s also gotten a lot of grief because people think it looks fake, artificial, and gives that “plastic skin” look. To be honest, though, those criticisms aren’t really down to the technique itself, but more how the photographer used (or misused) it. It’s a tool, like HDR. And just like HDR, it’s often used badly.

I discovered frequency separation a few years ago, and it’s not something I do often, but it can be extremely effective if done right. Nathaniel uses the Gaussian Blur to create his low pass layer, but personally I prefer to use the Dust and Scratches filter. There’s many different ways you can create the low pass layer, and it’s ultimately going to boil down to personal preference and what works best for you. I just find Dust and Scratches works best for me. 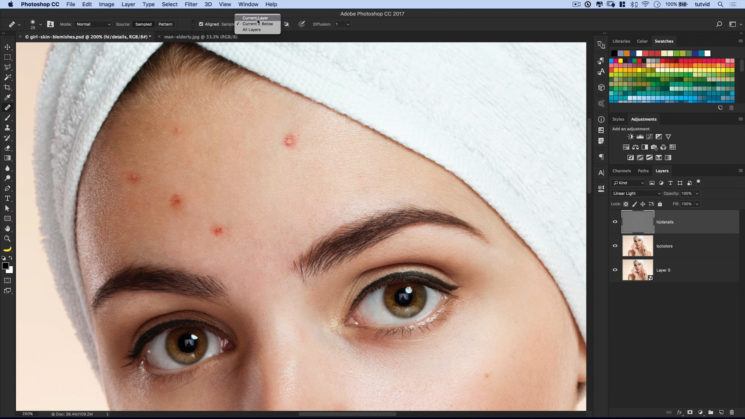 As mentioned in the video, if you’re using the Clone Stamp, Healing Brush, or similar tools, you’ll want to ensure that you change the setting to only use the current layer. Otherwise, you’re not going to get the results you expect. The high pass layer is (in theory) the fine details. The low pass layer is just the overall form and colour. If you set it to all layers and start painting on your high pass layer, you’ll start to add colour to that (mostly) grey layer, which will really throw off the area you’re trying to clean up.

The frequency separation option is the most complex and involved, but it’s going to offer the most amount of control.

One technique I’ve used occasionally for a super quick fix is to make a new layer, and then very quickly Healing Brush over wrinkles. This creates a layer that doesn’t really look all that natural, but it doesn’t usually need to. But once you’ve made the layer, drop the opacity down to 0% and then slowly bring it back up. This technique isn’t perfect, and doesn’t hold up to scrutiny at full resolution or in a big print, but it’s a good way to help lighting up the darker areas in wrinkles, and make them appear a little less obvious. 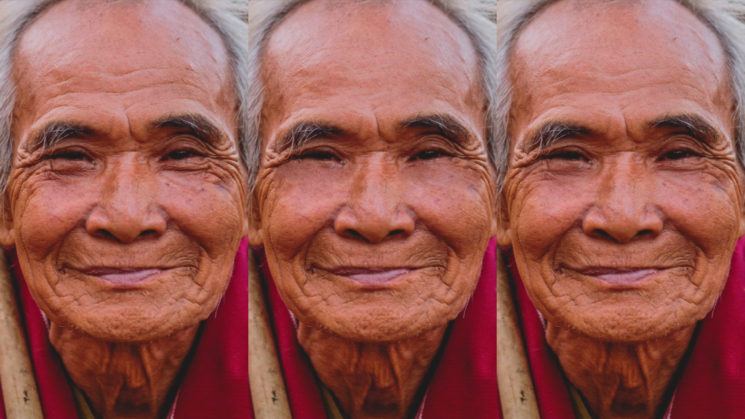 I wouldn’t use this technique for getting rid of things like spots, but it can be a useful quick way to reduce the effects of wrinkles and fill in some of the darker areas. It does have a tendency to soften the skin texture, though. This may be desired, it may not. Mixing two skin layers that may already both be relatively smooth can look a little unnatural sometimes. But it’s a useful trick once you get quick with it.

So, that’s it, a bunch of different ways to help tidy up skin on your portrait subjects. And no one way is perfect. None of the above methods will work for every single image you throw at them. But between them you’ll have most of your blemish removal needs covered.

5 ways to achieve that wet skin look in your photos

How to make skin pale (and still realistic) in Photoshop

« How a photographer created fantastic light painting with fire
Can the reliance on presets cost you your career? »