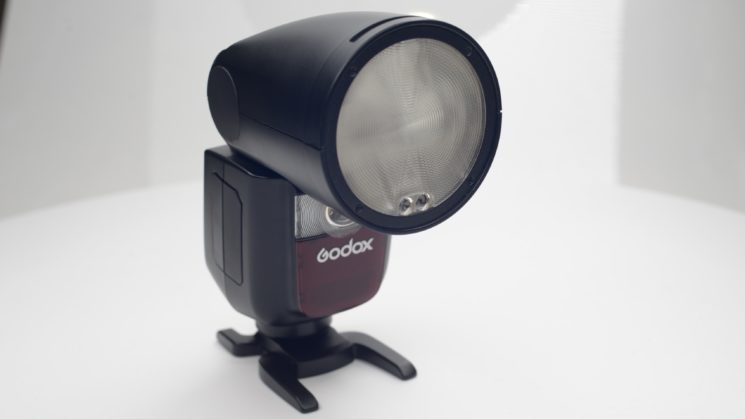 The Godox V1 is the new and somewhat controversial round head speedlight from Godox. The controversy is a topic for another discussion, although feel free to do so in the comments if you really feel you have to. For now, we’re going to take a little more of a look at the Godox V1 flash itself.

This morning, the folks at Pixapro received a pre-production unit – it’s essentially the same as the final thing except for the firmware version. They brought it into The Photography Show and I had the opportunity to take a brief look at it and have a little bit of a play. So, I’m going to quickly go over some of the features that stood out to me, and my overall first impressions of the Godox V1 round head speedlight.

Obviously, the shape of the head is one of its most noticeable features. It’s round. It’s the same size as the H200R round head adapter for the Godox AD200 (Pixapro Pika200). As such, it takes all of the same round magnetic modifiers in the Godox AK-R1 kit. But inside the head, things are a little different o the H200R. In here we have a regular speedlight style flash tube with a zoomable head that goes from 28-105mm and a Fresnel face.

The light spread coming out of the head, naturally, changes depending on the zoom position of the head, and we shot a few samples at different zoom settings to see how they compare. This is a very non-scientific test, and I can’t remember the exact zoom setting we used for each of these shots, but you get the general idea. 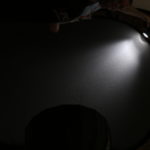 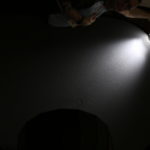 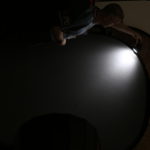 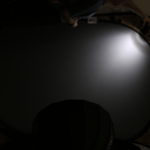 At the bottom of that face are two little LEDs (See update at the bottom of this post!) which are the built-in modelling light, a very nice feature that isn’t simply on or off. It actually offers 10 different levels of power. While that feature might not seem immediately beneficial for most photographers, that could potentially be useful for close up and macro shots where the minimum powered flash isn’t quite minimum enough. 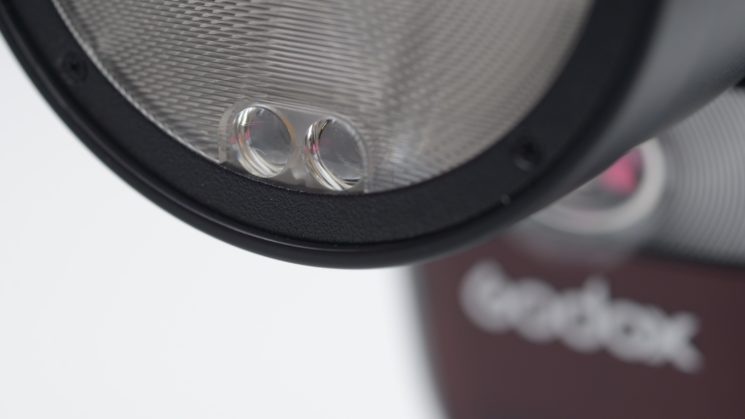 Below the head, the typical red AF assist light has been replaced by a white LED (See the update at the bottom of this post). It wasn’t dark enough where we were to force this to come on, though. So, we weren’t able to test it in action. 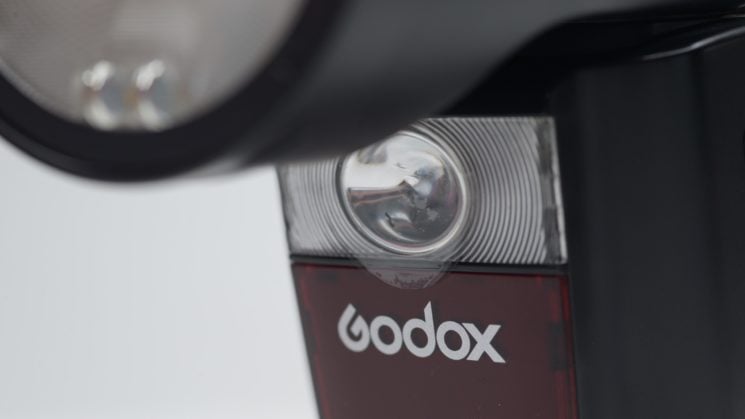 On the back, we see a nice design refresh. The buttons have evolved slightly, particularly the wheel used to change power & dial through menu options. Now it’s also a D-pad. The on-screen menu’s changed somewhat. The observant amongst you will probably have already noticed the little “TCM” option. 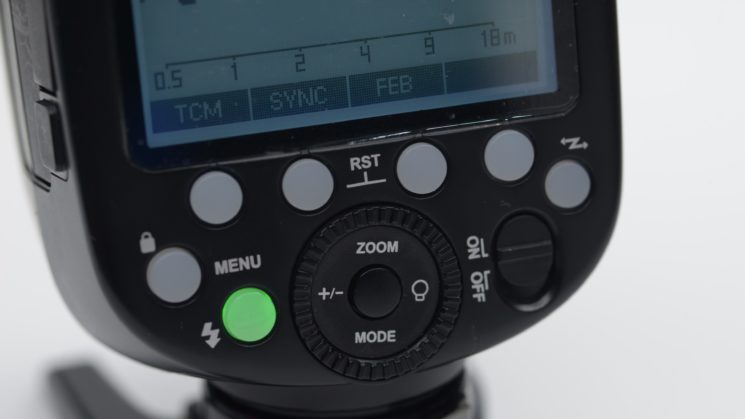 Yes, that’s right, the Godox V1 includes a feature found on no other Godox speedlight, and that’s the TCM feature. This allows you to get a shot in TTL and then one-button click to convert it to a manual power reading. A very handy feature for wedding and event photographers. The Godox V1 can also act as a commander for other Godox lights (also handy for wedding and event photographers who also want a speedlight on-camera as well as off-camera strobes), so presumably, the TCM function is available for slaves, too, although we didn’t have time to test that today.

Below these controls is a newly designed hotshoe locking mechanism. Gone is the fiddly giant plastic screw. Now it’s a quick lever to lock the speedlight into place on your camera’s hotshoe. 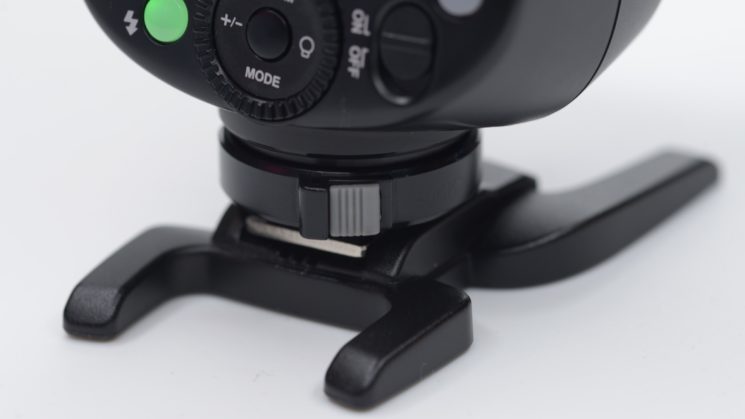 When you are using the Godox V1 on the hotshoe or with modifiers that have a cold shoe mount, this makes life a whole lot easier. No more fiddling around with a screw thread that doesn’t hold the flash quite as securely as we’d like while breaking our fingers trying to tighten it. Now it’s just a case of pushing a button and then twist to lock and unlock it into place. This is set to be the new standard mounting mechanism on all future Godox speedlights. 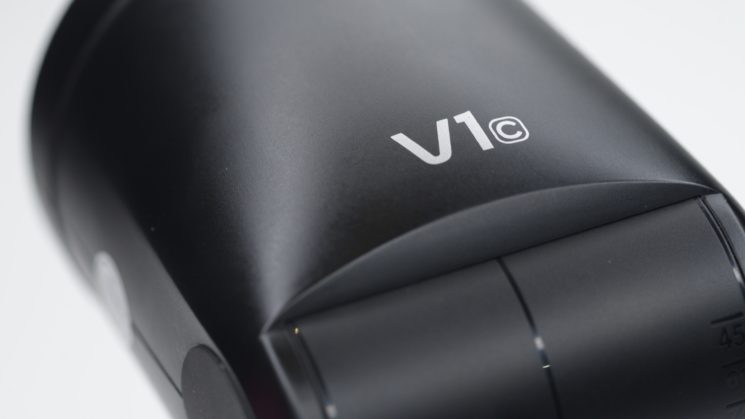 As you can see in the image above, we had the Godox V1c for Canon. Fortunately, we were at The Photography Show, so there were one or two Canon cameras floating around for us to use. The below sample images were shot with the Canon 5D Mark III. First up, a comparison without and with the Godox V1 so you can see the kind of difference it makes to the scene. These were both shot at f/4, 1/160th and ISO250. 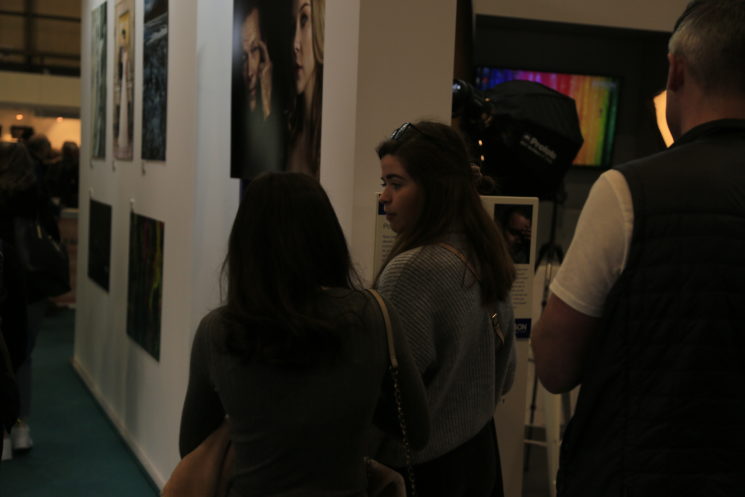 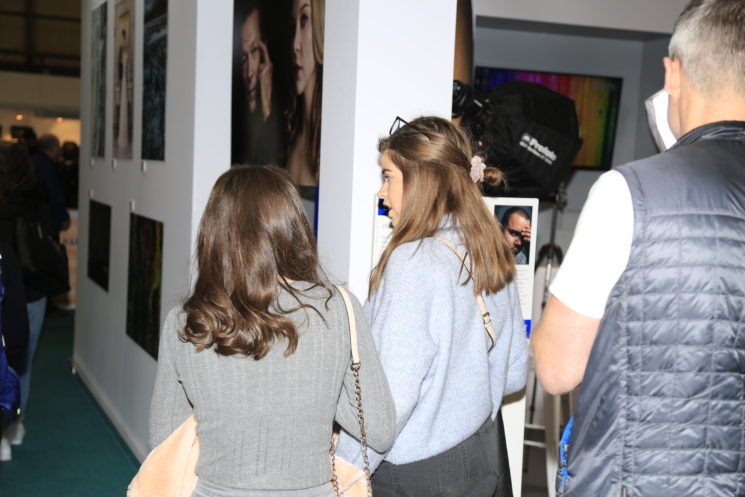 For the rest of the images, the Godox V1 was used in various states of bare, pointed directly towards the subject, pointing straight up with the reflector that comes as part of the AK-R1 magnetic modifier kit for the H200R round head, or with the V1 held slightly off-camera, triggered by a Godox XPro in the camera’s hotshoe. All were shot with the Godox V1 in TTL mode. 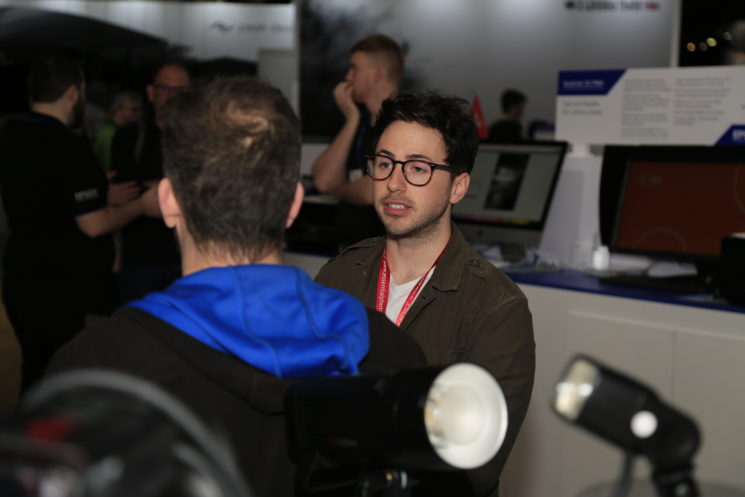 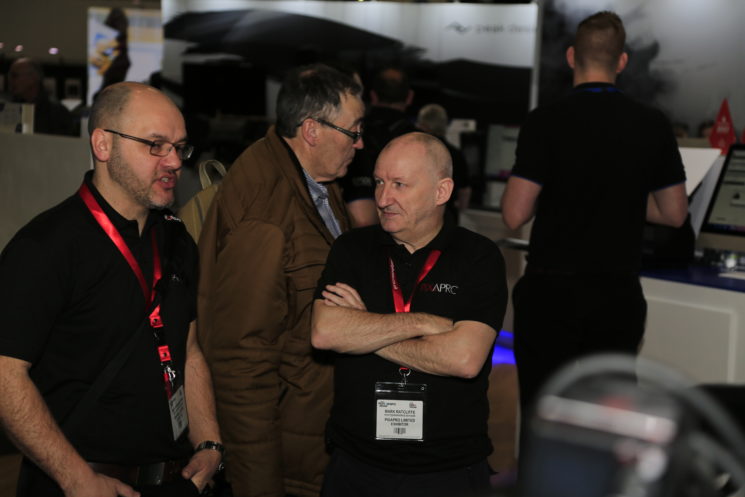 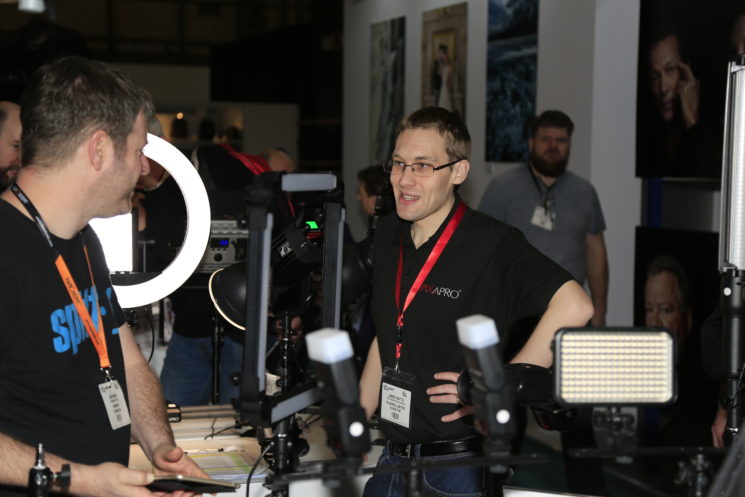 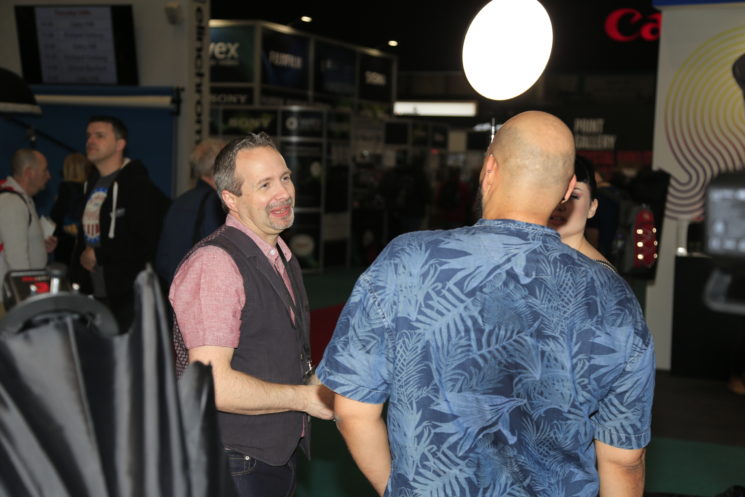 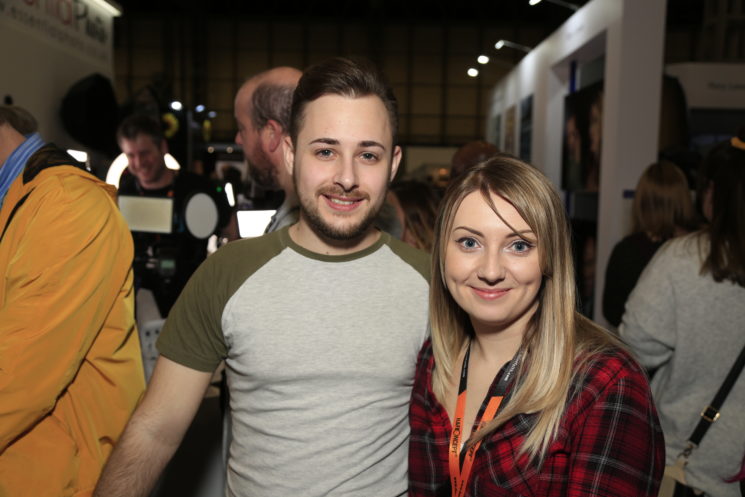 One physical feature of the Godox V1 that I haven’t mentioned yet is the battery. I know this has upset some people, but the Godox V1 does not use the same battery as the V850II and V860II speedlights. It has a new design which is essentially a pair of 18650 batteries (the same type used in many gimbals) inside a proprietary Godox shell. This allows the V1 to get much faster recycle times than we’ve seen with previous Godox speedlights. 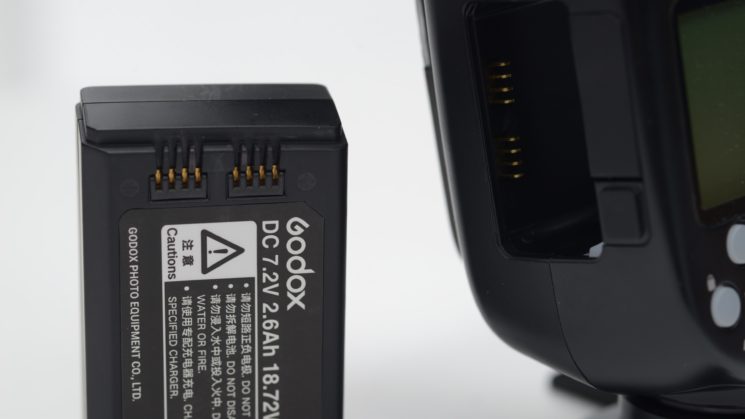 The battery has a unique design, which essentially fills in a huge hole going straight through the speedlight body from one side to the other. But the only exposed areas inside this hole are the pins, which are protected on the battery itself.

Overall, between the battery, the new foot, and button refresh, it’s a nice update to the V850II and V860II even before we take the round head design into account. So, hopefully, this means that there are V850III and V860III models on the way very soon. But for now, the round head is the big selling point of this light – assuming they are still going to sell it – even though the other changes are very cool.

Overall, it feels like a fairly solid unit, with a light output and recycle time that’s quite respectable. Unfortunately, I had to give this one back to Pixapro after I had a little play with it, but hopefully, I’ll be able to get a more extended look at the Godox V1 speedlight again very soon.

There’s still no word on a specific release date yet, nor a price here in the UK, but various places in the USA seem to have it available to pre-order for around $250.

Many thanks to Jason, Mark and Ling at Pixapro for letting me take a sneak peek and a bit of a play with the Godox V1!

Update 25th March, 2019 – We’ve received some information from Godox stating a couple of changes from this preproduction unit to the final version.

1. After feedback from photographers at WPPI, Godox will be going back to the red AF Assist Light for the V1, which is apparently performing better than the white one shown in the prototype.

2. The two LED modelling lights on the round head will change into a single LED. A Fresnel lens will be added to help improve the power and performance of the modelling light.

« Can you be a successful fashion photographer outside a big city?
Give your DJI Osmo Pocket vlogs great sound with DJI’s new external microphone adapter »