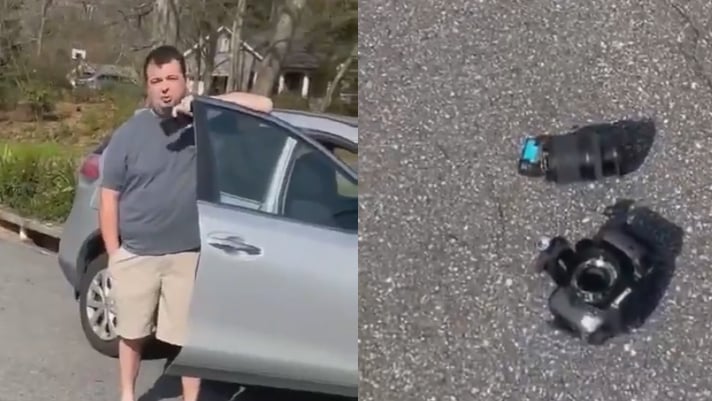 A fire chief from Alabama recently pulled out a gun on a real estate photographer and a realtor who arrived at the house he was selling. The man claimed that he thought a camera was a gun, he smashed it against the ground, and the victims claim that it was, in fact, all because of the color of their skin.

Jason Rickels is the Fire Chief in Tarrant, Alabama. Realtor Regina Lee and photographer Dwayne Brodie reportedly came to his for-sale home to take some photos before Lee’s client arrived. The realtor told CBS46 that the appointment had been scheduled. However, Rickels saw them through a camera and reportedly called his real estate agent to get them out. “So I’m like well this is scheduled but if the owner doesn’t want me in there then fine we’ll leave immediately,” Lee told CBS46.

But as they were getting in their cars, Rickels arrived. According to the police, he blocked them from leaving, got out of his car, and pulled out a gun. Then he took Brodie’s camera and smashed it. The photographer filmed the aftermath of the incident (mind the strong language):

I spoke #exclusive.ly with a realtor & photographer who believe because of the color of their #skin a homeowner pulled a gun on them while they were scheduled to view his for sale house. Arrested by Roswell Police, The homeowner, Tarrant #Alabama Fire Chief Jason Rickels. @cbs46 pic.twitter.com/Ool00cM8SD

Regina Lee also posted the story to her social media, explaining what had happened and how it affected her:

The realtor said that they identified themselves multiple times. She added that photographers even had their company logos on them. “I feel he didn’t see anything but the color of our skin,” she added.

Rickels denied this and said that he thought they were scam artists. He allegedly thought that Brodie’s camera was a gun, so he pulled out his. I wonder though if he still thought it was a gun when he snatched it and smashed it against the ground? I mean, it’s hard to mix a camera with a gun while you hold it in your hands?

Police didn’t buy Rickels’ arguments and he was arrested. He was charged with aggravated assault with a deadly weapon, possession of a firearm during the commission of a felony, and second-degree criminal damage to property.

Lee claims that a city official called her after the incident and said that this wasn’t the first time Rickels has been accused of racist actions. The Mayor of Tarrant has refrained from commenting and said that the City is “aware of the current situation” and “looking into any violations of City policy.”

Breaking: Nikon pulls out of NAB due to Coronavirus concerns