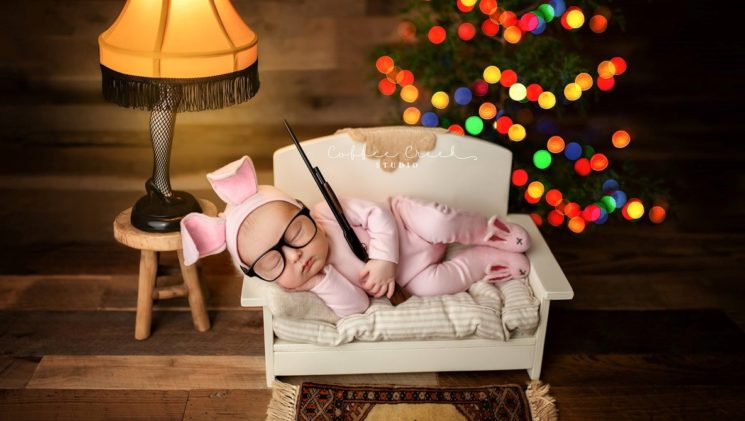 It’s November, but let’s face it, Christmas is gonna be here in no time. So, a Shelbyville, Indiana-based photographer Amy Haehl recently posted a baby photo inspired by the iconic movie A Christmas Story. But instead of evoking holiday spirit, the photo caused a flood of negative comments because of a wooden BB gun the baby boy is holding in his arms.

Amy, who is the owner of Coffee Creek Studio, creates Christmas-themed photos for babies born around the holiday every year. This year she was inspired by the holiday classic that’s watched in many homes around the Christmas season. However, the photo didn’t get as much approval as the photographer was hoping for, despite the disclaimer that the BB gun was made of wood.

Only 49 days until Christmas!!?Ralphie loved his pink bunny suit I had made for him! ?**Disclaimer** the BB gun is…

FOX News quotes a couple of negative comments, and they have been deleted since. After Amy posted the photo, one follower wrote:

“Will now unfollow you. Who the hell would take a picture of a baby and a gun just for money. Such a waste since you are so talented. Think hard about your lack of principles.”

Another commenter was even harsher in a comment that has been deleted since:

“Also unfollowing and unliking you. Extremely distasteful…. Guns are never ‘cute’, not even as a prop or movie reference. Disgusting. The gun culture in this country is a disgrace.”

After receiving lots of negative feedback and having Yahoo publish an article about it, Amy posted a statement to her Facebook page. She writes that she wanted to create a photo inspired by A Christmas Story for years, but she only managed to accomplish it now. The photographer adds that she hopes that any negative comments were caused only by a misunderstanding and not knowing the movie.

Hey there!! I would like to take this time to thank all of my followers and thank you all for being here!! I know some…

Since the story got published, the photo has also received a lot of support in addition to the negative feedback. Many people have recognized the reference to the movie immediately and loved Amy’s photo because of it. “You captured the essence of A Christmas Story. It is my favorite Christmas movie and it isn’t Christmas if I haven’t set aside the time to watch it on Christmas Eve,” one of the comments reads. And this is exactly my thought.

Personally, I’m the first one to judge when I think guns and violence are promoted. And I’m also pretty quick to judge, to be honest. But this time, I think it’s clear that the BB gun is merely a reference to the holiday classic. And I think that it just wouldn’t be the same without it, considering the story of the movie. I understand that the political climate in the US has been kinda sensitive lately. But, no matter how much I don’t support posing children with guns: I believe this is different. It’s not made to promote guns nor children with guns. It’s not meant to offend anyone. It’s just a reference to a classic holiday movie that’s been watched all over the US for decades now whenever Christmas approaches. Despite the toy BB gun in the image, it’s meant to cause warm and fuzzy feelings you get when you watch A Christmas Story with your family.

« Can a browser based Photoshop clone compete with Photoshop? I took PHOTOPEA for a high end retouching test
This timelapse of blooming flowers took 40,000 photos and nine months to create »