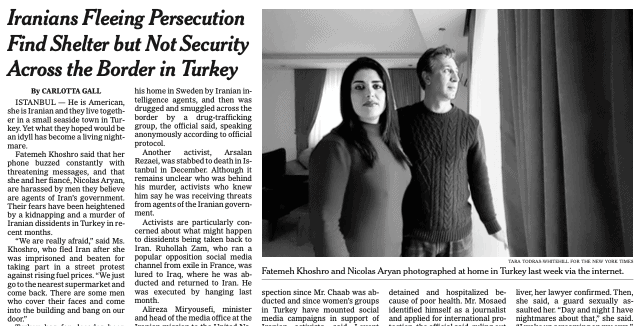 I’ve spent most of my career working as a photojournalist and director of photography, and I’m happy to have recently started working with Wonderful Machine as a freelance photo editor and creative consultant.

As a photographer, I work from my home base in Istanbul, completing assignments for places like The New York Times. But, just like everywhere else, COVID-19 has put a damper on normal human interactions in Turkey. So, when a photo editor at The New York Times gave me the option of shooting an assignment remotely, I was intrigued. In addition to health concerns, the three subjects I needed to photograph were worried about having their location disclosed for security reasons. And though it might have been possible for me to get to them, I had never tried a remote photoshoot; with all of us looking to minimize travel, I wanted to give it a go. 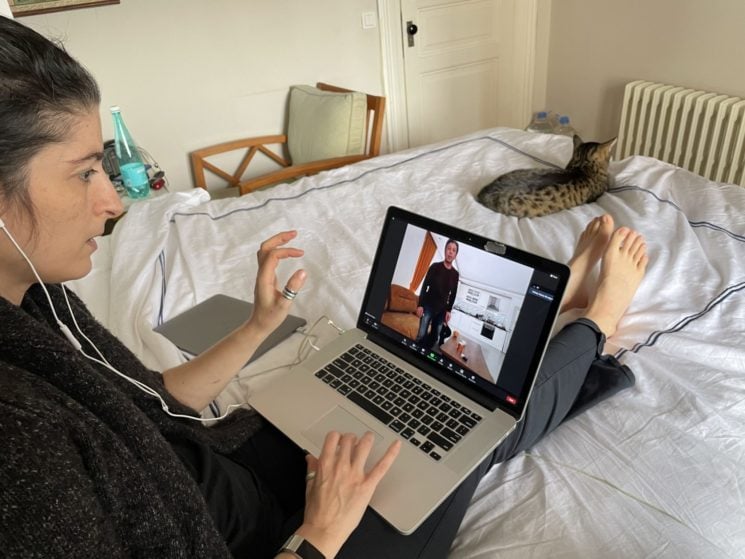 The most laid back I’ve ever been during an assignment. Photo by Jack Zahora.

To do it right, I spent a good amount of time researching different remote shooting methods before settling on a plan. 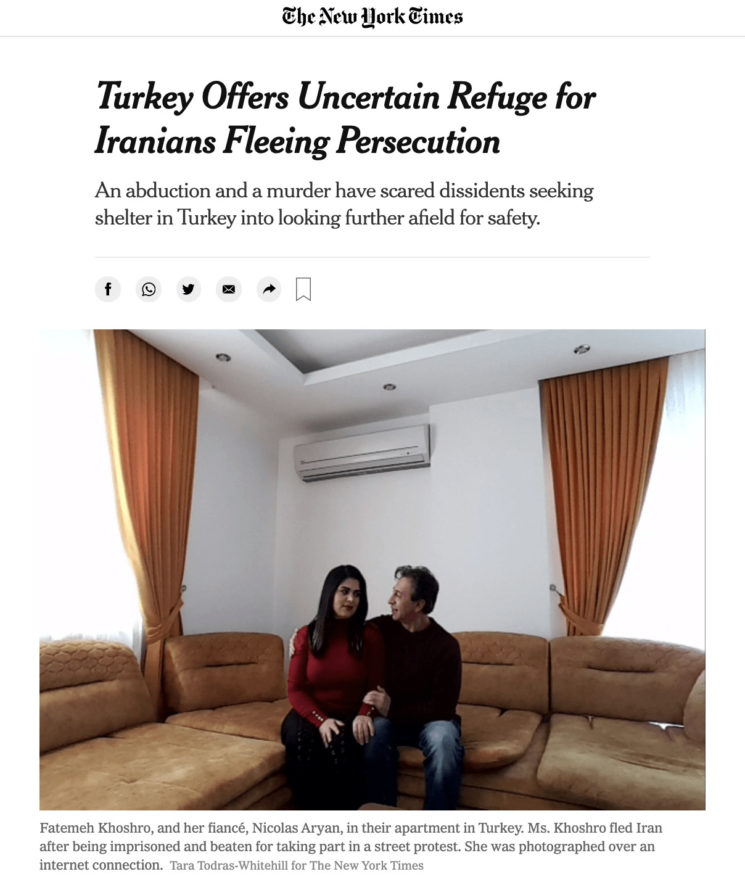 So, how does one actually shoot an assignment virtually? Now that The Times has published the article, I wanted to share what I learned.

I found a lot of tips and articles for people who did remote work in places like NYC, or where the subjects themselves had good equipment. But we were going to be working with minimal tools, as my subjects only had Android phones. So, the day before the shoot, I set up pre-interviews with the subjects and ran a bunch of tests.

I tried shooting the screen with my DSLR but I got too much of a Moiré effect, so I decided against that. However, other people have had success using film cameras and shooting their screens — you can see for yourself here.

I then tried my iPhone 12 Pro in the same way, which was better because it has a ‘live’ function, so some of the photos didn’t have the Moiré effect. But the quality still wasn’t as good as a screenshot. Another option would have been using an app where I could remotely control the subjects’ camera phones. But both of them had Android phones and I had an iPhone and I coudn’t find any apps that work for both.

You can also have your subject share their screen on a Zoom call, then start their camera, but you still need to get someone to press the shutter or have it done remotely. To me, it really only makes sense if your subject has a remote control clicker. So, none of these four ideas were possible this time around.

If the subjects had iPhones, we could’ve used an app like Closapp or Facetime, which was recommended in other articles for remote shoots. That said, one of my subjects, Somayeh, needed to use a translator, so there were three people on the call and Facetime wouldn’t have worked because it limits your phone video if you have more than two people on at once.

So, what did we do? I decided to take screenshots because when I compared all the different pictures in Photoshop, that was the clear winner in image quality. And we did what millions of people in lockdown have been doing every single day: we used Zoom. 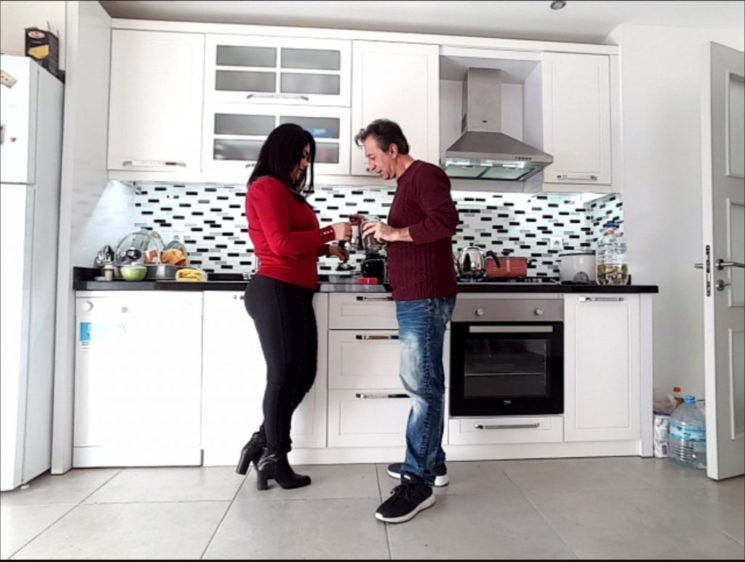 Fatemah and Nic at home. Photographed remotely for the New York Times.

Since the larger the screen you have, the better the quality of screenshot you get (literally the definition of pixels per inch), I used a 15-inch laptop on my side of the call.

None of Fatemeh, Nic, or Somayeh had laptops, so we had to work with their Androids. Phones tend to have better cameras than laptops. But a laptop would’ve been helpful if we could’ve set up the shot with the computer; then, the subjects would be able to take a physical photo from the same place with their phones. 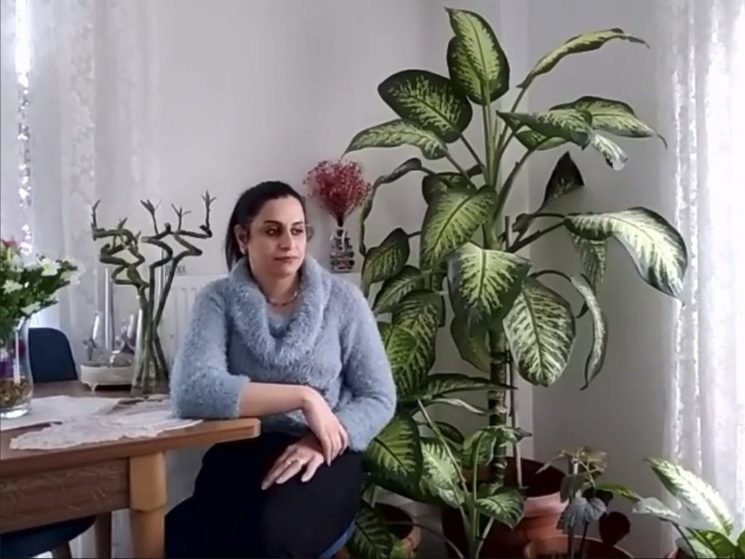 Somayeh Ramoz at a friend’s house. Photographed remotely for The New York Times. 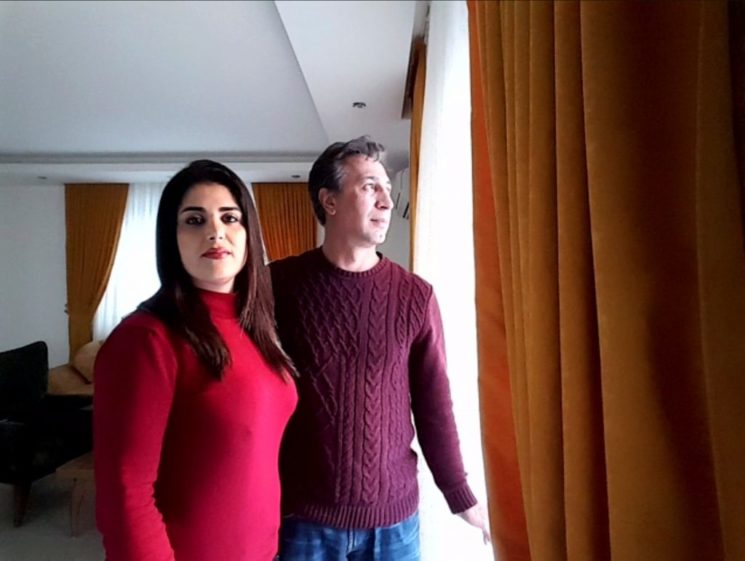 Get your subjects to help you scout for the best light in their location.

You’ll also see that the quality of Somayeh’s photo isn’t as good as Fatemeh and Nic’s. I think that’s a result of her phone, but also because of her internet connection. We tried to use both her data and WiFi, but neither was great. The best I found was to have her stay very still because then the video software stopped guessing at her movements and the image became crisper.

I also figured out how to change my screenshot to a .tiff to maximize the file size, and how to save screenshots to a folder of my choice so it didn’t overwhelm my desktop. If you’re interested in that check out the video below.

Typically, I try to find interesting lighting, so we experimented with taking photos when the natural light was brightest in the subjects’ apartments. That turned out to be hard because the Zoom app compensates for harsh light, and it didn’t work as well. We had to try a few different times during the day to see what worked best, and it turned out that indirect afternoon light was optimal for both.

I didn’t do any editing to the photos because of the resolution available. Instead, I cropped out the Zoom logo saved it as a jpeg. 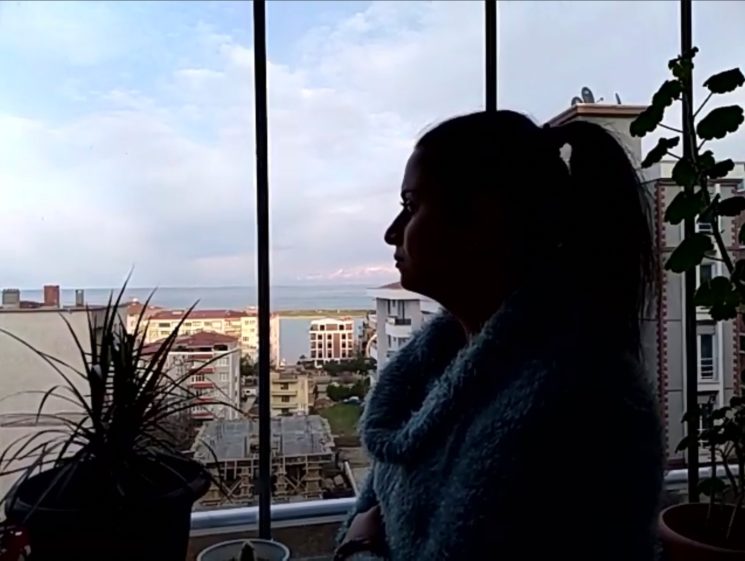 Video apps compensate for light levels, but outcomes vary based on equipment available.

Note: Taking screenshots works as long as you don’t have to blow up the pictures. This would NOT work if you were doing a billboard advert! You can see from the article that the pictures aren’t the best quality, but they are workable for what was needed.

It’s always important to build a rapport with your subjects, especially with vulnerable populations where people can be on edge to begin with. When I work for news outlets, the writer or producer has usually already made contact with the subjects. But even then, I always take the time to get to know them a bit in advance of the shoot so they can be as comfortable as possible with the process. I recognize that what I am doing with my camera – even remotely – can be intrusive, so if they don’t feel comfortable with me, the results won’t be as good. And since I’m asking a lot from them, that rapport is essential to the success of the project.

Even in the middle of a shoot, I’ll often stop for a while and just continue to chat with the subjects to put them at ease. If they feel comfortable opening up to me, I listen, because I want them to know that I care about their story and that they can trust me with it. And, of course, learning about people and their lives is a big part of why I love my job so much.

For this article, I knew that security was an issue for all the subjects. With Fatemah and Nic, I knew they were worried about people following them, so they rarely go out. So, when we started the conversation about the shoot, I didn’t ask them if there were any outdoor places we could go because I thought that might make them nervous – considering their situation. At the very end of the shoot, Nic suggested going out onto their balcony for a few minutes, which he did, but I made sure that it was something that he was okay with first.

Same with Somayeh. When I first talked with her, she was alone in her apartment, which was pretty bare. I was worried about trying to find a good photo there, but I also didn’t want to ask her if there was anywhere else that she could go because I didn’t want to push her outside of her comfort zone. But, later in the day, she mentioned she was going to her friend’s house and I asked if we could continue the photo shoot there. That ended up being better, not only because there were more options for different backgrounds, but also because it meant there was someone there who could hold the camera.

Always make sure that your subjects are comfortable. If you’re actually in the place where you’re taking photos, you can feel the emotions more and see the body language. But it’s a lot harder to do that with a remote shoot, so you may have to talk more and ask how they are doing more — and offer lots of positive reenforcement!

Finally, there are things a subject may not be comfortable with, such as showing their face or their kids’ faces. Whatever it is, I make sure to discuss the limitations and work around them, but I never blur in post-production because that goes against photojournalists’ ethics of changing an image, and I want to make sure I keep the integrity of the shoot. So, sometimes we can shoot them from behind, keep their face in the shadows, show just their hands, or display objects that represent them. Regardless of whether the images work out, I always want the subjects to feel comfortable and safe.

Tara Todras-Whitehill is an award-winning photojournalist and storytelling consultant. From 2013-2019 she co-founded and ran Vignette, a storytelling company that worked with NGOs like UNICEF, IRC, and HRW among others to create interactive media projects. Previously she worked as a staff photographer for the Associated Press in the Middle East, covering the Arab world.

She is a member photographer and a freelance staff member at Wonderful Machine, an art production agency with a network of 600 photographers in 44 countries. If you have any questions, or if you need help with your social media presence, you can reach out to Wonderful Machine via email.

Expert advice: Ten tips to make the best of Instagram as a photographer