Most camera manufacturers run ambassador schemes. They vary in their numbers and the precise ways in which they’re run, but the principles seem similar enough: pick a range of photographers who use their gear to promote them to the public. But I’ve a feeling that they could do better.

Olympus UK announced its latest crop of ‘visionaries’ and brand ambassadors last week. It’s not the sort of press release to which I often pay much attention, but a scan of the thirteen names left me a little dismayed, shall we say. Of the thirteen people—four visionaries and nine ambassadors—only one was a woman. 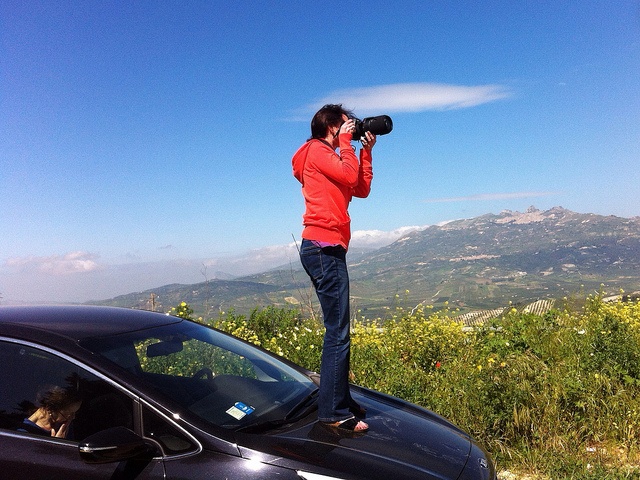 Me in the middle of Sicily. Photo by my father.

According to the press release these visionaries and ambassadors are part of a scheme that:

… honours the talents of the Olympus Visionaries and Ambassadors, the relationship based on their passion for photography whilst shooting on Olympus imaging equipment. These inspirational photographers represent a wide range of genres across macro, fashion, reportage, wedding, portraiture, street, travel, sport and landscape, bringing a wealth of knowledge to the scheme.

But apparently only 7.7% of these inspiring and representative photographers are women. I did ask Olympus if they had any comment regarding this, but so far I’ve heard nothing. Regardless, it led me to wonder: is Olympus an outlier, or is it broadly similar to other manufacturers’ ambassador programmes. I took what was meant to be a quick look but turned into a much deeper analysis of the genre. It didn’t make for pretty reading.

Let’s take a look at Canon first. Canon Europe has a multi-tiered representation programme comprising ambassadors, explorers, and masters. The driving force behind it is that it: ‘brings together a wealth of creative talent and industry experts all of whom share their skills, knowledge and passion for photography and filmmaking at various Canon workshops, seminars and industry occasions that are held throughout the year across Europe, the Middle East and Africa; thus inspiring generations of like-minded professionals.’

There are ten Canon ambassador positions but one of these is occupied by a couple, Jonathan and Angela Scott. Of the eleven people serving as Canon ambassadors just Angela Scott is a woman. That means 9% of the Canon ambassadors are women. There are 52 Canon explorers. Nine are women. That’s a healthier 17%, but still not exactly a bastion of gender equality. Of the four masters, one is a woman. I did send an email to Canon asking them is this was an accurate representation of photography today but I’m yet to receive an answer.

When it came to Nikon, I assessed the Nikon USA ambassadors programme for gender balance, rather than Nikon UK’s or Nikon Europe’s. Nikon USA has 24 ambassadors, chosen because they ‘… are some of the most talented and influential visual artists working in the business today. These gifted, spirited storytellers go above and beyond most, and are admired for their passion, energy and commitment to their craft.’ Seven of them are women. That’s by far the healthiest gender balance, with women comprising 29% of the programme.

The gender balance of Pentax’s ambassador programme is, quite frankly, abysmal. It has four ambassadors, three of whom are men and one is an organisation. Credit to Ricoh, however, as when I emailed them regarding this, they did pay me the courtesy of a response.

Our programme is currently under review as we move into our new financial year. However, we note your comments and will take these into account for the future. However, please note, potential ambassadors usually make representation to us and any partnership is based on the mutual benefit of both parties.

Sony has 55 ambassador positions. One of these positions is held by a couple, making for 56 ambassadors. Ten of these are women. In percentage terms, that’s 17.8. For a programme that claims its members ‘… are carefully chosen to represent their local locations in Sony markets and to form a greatly diverse group of imaging professionals,’ women aren’t exactly given similar status to men. (Also, what the bejeezus is a ‘local location’?)

I know that photography has a gender imbalance; I’ve experienced it enough times; I’ve written about it enough times. And yet these ambassador programmes are actually an opportunity for the industry to begin to redress this disparity. If these programmes are designed to inspire and motivate other photographers, why not take advantage of the platform and appoint some more women as beacons and role models?

Whenever one writes or speaks about diversity and representation, a normal response from a lot of people is that it doesn’t matter if people in public life or running companies or even representing camera manufacturers are women or men, minority ethnic or not, gay or straight, disabled or able-bodied–they just have to be the best people for the job. In a world where everyone has perfect equality of opportunity, that’s absolutely true. But in a world where women are consistently under-represented in politics and boardrooms, where minority ethnic people struggle to access higher education, let alone enter public life, and disabled people can’t even get into a fifth of UK shops, you’ll find that it isn’t necessarily the brightest and the best who are where they’re meant to be.

A critical failing in the achievement of inclusive political structures, boardrooms, and creative industries lies at foundation level. We can’t choose the brightest and the best to fill these roles because the brightest and the best aren’t there to be selected. In which case it isn’t about lowering bars and reducing standards; it’s about recalibrating our requirements. We fail women because we assume that they’ll want to go off an have babies, rather than thinking about how they can best be supported in these choices. We fail minority ethnic children because we allow them to slip through the cracks in the education system. We fail disabled people because we can’t even ensure that they have adequate accessible loo provision.

Even if people aren’t actively discouraged from going to university, for standing for office, for seeking a promotion, from picking up a camera, there’s often little by the way of real encouragement to do so and furthermore there’s the issue of inspiration. If people don’t see someone who resembles them running a FTSE 100 company, speaking in Parliament, or even making a name for themselves with a Canon camera it makes them less inclined to think that they might be capable of being there and of doing that job, too. Yes, it’s about role-modelling.

The benefits of diversity

For programmes that actively seek to encourage and inspire people with their cameras, these ambassador schemes are the perfect platform to engage with women–and indeed other under-represented groups in photography’s ranks. In the case of Pentax, might a woman be more inclined to enquire about ambassador status if there were more women already there? Or even if they knew that they could enquire at all. It’s time for the manufacturers to stop reinforcing the notion that photography is just for men and embrace the fabulous diversity of the photographic community. None of them need lower their bars for entry; they just need to recalibrate them. You never know, it might just help to boost camera sales.

In the interests of thoroughness, my methodology for determining if ambassadors were women didn’t rely on just assessing someone’s name or photo. I also read their biographies for references to he/his/him and she/hers/her. I read a lot of biographies.

Should only your logo represent your photography business?

Snapchat is “a new kind of camera,” according to their first TV commercial

« 5 tips you can use right now to improve your photography
Watch: what it would look like if cameras had superpowers »