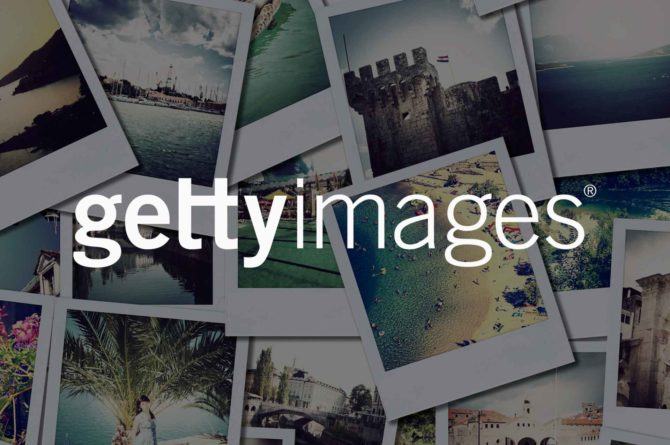 Getty Images has filed a copyright infringement suit against Ohio man, Walter A. Kowalczuk for allegedly downloading as many as 3,400 high resolution images from Getty’s servers without permission which he then resold through a private group on Facebook.

According to PDN, Getty’s claim against Kowalczuk, filed June 8th in US District Court in Cleveland, states that he and other members of the group allegedly bought and sold images using codewords for the sources of those images, such as “Spaghetti” for Getty and “Apples” for Associated Press. 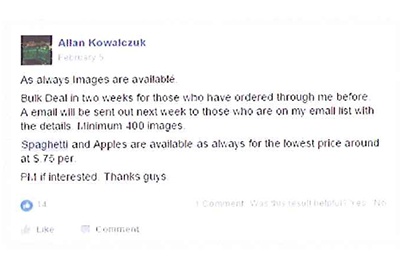 The screenshot above, allegedly posted by Kowalczuk to a private Facebook group, might be a little difficult to make out but it states…

As always images are available

Bulk Deal in two weeks for those who have ordered through me before. An email will be sent out next week to those who are on my email list with the details. Minimum 400 images.

Spaghetti and Apples are available as always for the lowest price around at $.75 per.

The lawsuit says that an employee of Getty distribution partner, Photo File contacted Kowalczuk in March 2015 about purchasing six images of a Chicago Blackhawks hockey player that Kowalczuk had offered for sale.  This was an image that both Photo File and Getty license.

Kowalczuk allegedly told the Photo File employee that the image was sourced from Getty and “gave specific instructions for ordering the images”.  The employee complied with these instructions, and Getty subsequently purchase another 29 images from Kowalczuk on three different occasions – March 29th, April 1st, and April 29th, 2015.

PDN reports that how Kowalczuk gained login credentials for Getty is unclear, but that the actual owners of the accounts used for the infringement “confirmed that Kowalczuk was neither an employee.. nor authorised to use its login credentials”.

Getty often get a hard time for going after individual copyright infringers, even if they usually deserve it, but it’s nice to see them also going after the bigger fish, too, who are ripping off photographers on a much larger scale.

Photographer Loses Copyright Suit Against Mapmaker Because of Licensing Technicality