The Parrot Bebop drone has never been quite so popular as the DJI’s or 3DRs out there. It does not rank the same on the pro equipment scale so pros are less likely to use it. Then again, it is less than $500 where a 3DR solo (gimbal-less) or a DJI Phantom Vision 3 are around $1000. That puts the Bebop it the same price range as the Phantom  2, but again, not as popular.

Here is another reason why this little drone may not be as successful as its colleagues, it can be taken over or dropped to the ground quite easily.

There were two  different demos at DEF CON dealing with the Parrot drones, I think that the more interesting one was done by researchers Michael Robinson and George Mason. They were able to launch a (simple) de-auth wifi attack on the drone via its open wifi and take over the drone with their own installation of the free Parrot app. 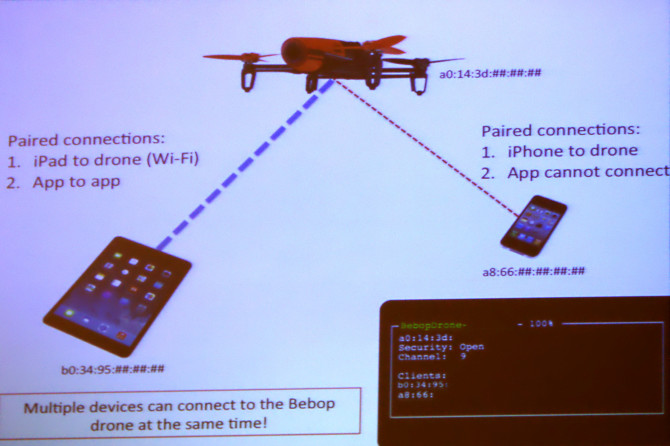 Here is one of the demos that shows how to disable a Parrot:

Robinson also tried to hijack a Phantom Vision 3, which proved to be a harder task since it is controlled via radio rather than Wifi. Lastly, Robinson warned anyone who planned to take over someone else’s Parrot drone that the mobile app left forensic artifacts on mobile devices—including the serial number of the drone.

While I am definitely not saying the people should start tethering their drones to avoid theft, I think these demos shows that the scope of handling with drones is far more complex that anyone had anticipated.

How I photographed Comic Con portraits using only one light source