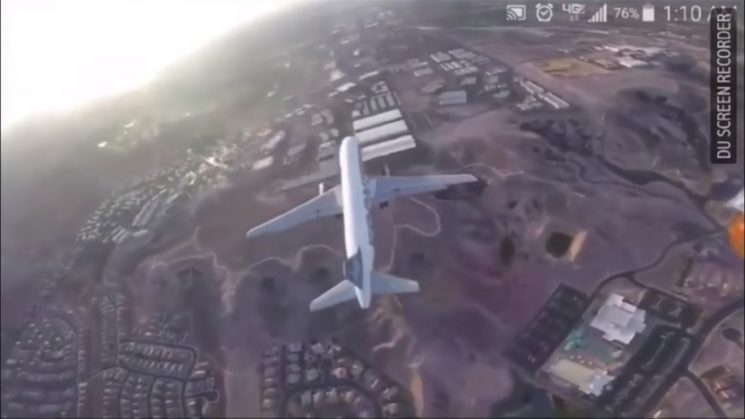 Drones can cause quite a mess when flying near airports, and there’s even a visualization demonstrating just how chaotic it gets up in the sky. Still, some drone pilots don’t give up on performing stunts dangerously close to airplanes and airports.  Just recently, a drone operator “dive-bombed” a passenger airplane and flew directly in its path. The video was posted privately to a Facebook group, but it soon reached FAA and they’re currently investigating the incident.

The video shows drone footage from the flight out of Las Vegas’ McCarran International Airport. It starts with the drone facing the aircraft. As the airplane approaches, the drone turns so they fly in the same direction, and the drone pilot quickly drops the altitude to get as close as it can to the jet.

As DPReview reports, someone posted the video privately to a Facebook group 1% FPV under the name James Jayo Older. It made some users angry and they shared screenshots outside the group. The video has eventually reached FAA, and they’ve confirmed that they are investigating the case.

By performing this stunt, the drone pilot broke several rules: FAA forbids flying above 400 feet, near airports and near airplanes. As DPReview adds and it’s mentioned on FAA’s website, recreational drones can fly within five miles of an airport only if they give notice to both the airport operator and air traffic control tower. However, most major airports don’t allow flying the drones in Class B airspace without specific permission and coordination.

According to Las Vegas Now, “a drone pilot who flies unsafely could face fines from of up to $1,437 per violation.” The fine for business goes up to $32,666 per violation. In addition, unsafe drone flying can have the pilot face federal criminal penalties. They include fines “of up to $250,000 and/or imprisonment for up to three years.”

From the comments on YouTube, it seems like most of the other drone operators are upset by the video. Some users believe incidents like this create a prejudice that all drone operators are reckless like this. On the other hand, there those praising the “great shot” this drone pilot took. But I think that, no matter how “great” the shot is, it’s not worth putting yourself or others to danger.