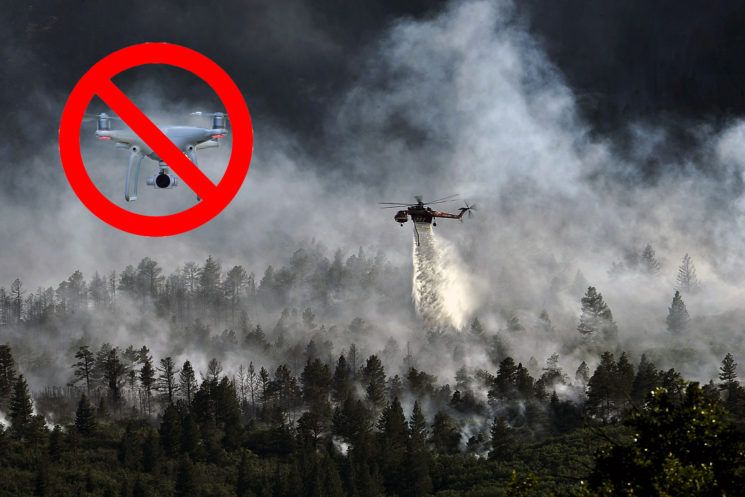 On June 24, a man flew a drone over a forest fire in Prescott, Arizona. This caused eight fire-combating aircrafts to land, due to the increased risk for the pilots and the firefighters. Right after the incident, the investigation took place, and the authorities have now published that they’ve arrested the man.

According to AZ Central, Gene Alan Carpenter from Prescott Valley was arrested on charges of endangerment and unlawful operation of an unmanned aircraft. Among other things, he was charged based on the photos of Goodwin Fire he put on his website.

Due to the increased risk, the area was proclaimed a no-fly zone, and Carpenter violated it by flying his drone. He didn’t just break the law, but put the entire firefighting crew at risk. There were 14 aircraft in charge of combating the fire, and drone caused six helicopters and two air attack planes to land sooner than expected.

Forest Gabrielle Kenton, a spokeswoman for the fire’s incident management team, tells AZ Central why the drones cause air operation to shut down. Due to the fire and thick smoke, it’s just too dangerous for the firefighting aircraft to go on flying. She says she understands people want to see what’s going on, but they endanger the safety of the crew, other people and themselves.

Fortunately (if I can put it that way), the drone was in the air not long before the aircraft would have landed anyway. Still, if it was in operation earlier during the day, it could have caused a much bigger damage. According to DPReview, Carpenter may face federal charges if the authorities determine he violated federal legislation and used a drone temporary flight restrictions.

Incidents like this have happened before, and sadly, this probably isn’t the last time. Just like Mrs. Kenton, I understand people want to see what’s going on. I even understand they want to document the event and take exclusive photos. But if there’s even the slightest chance of endangering others by taking the photos – please don’t do it.