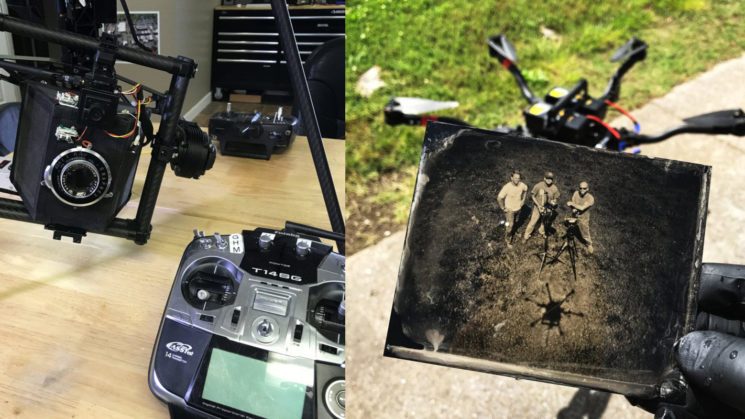 Combining levels of technology from vastly different times is often very fascinating. Sometimes it’s amusing, and occasionally it fails miserable. This time, failure is definitely not the word that springs to mind. For this particular merging of devices, photographer Giles Clement mounted a large format camera to a drone.

Why? To create the world’s first aerial tintype photographs, of course. Not content with simply making a photograph from the air, though, Giles and the team also produced the world’s first drone tintype selfie. Well, if one really wants to bring tintypes into the modern age, then I suppose one has to, really. It does look pretty awesome, though.

Giles has been photographing tintypes for about six years now. Being one to push himself and the technology available to him, this idea had been floating around in his head for a few years. But the technology simply wasn’t there yet. The few commercially available drones were limited in stability and payload.

Knowing nothing about drones, Giles turned to Google, where he discovered local aerial cinematography company, Snaproll Media. He gave them a call and put the idea to them. They invited him down for a visit, and off he set. Giles recounts the story on PetaPixel.

I drove a few miles south of Nashville to the Snaproll Media office to meet Ben and pilot Alan. Snaproll was one of the original 6 companies permitted by the FAA to operate drones commercially, so they’ve been at this for a while. The drones I’d seen and which most of us are familiar with are the small white DJI jobs, about 15 inches from tip to tip and with lift capacities measured in ounces not pounds.

The equipment these guys use, while similar in concept, are altogether different beasts. They are huge, measuring several feet across with total aircraft/payload take-off weights up to 55lbs (~25kg, and even more outside the U.S.), batteries that could start a school bus and enough carbon fiber to make a formula one car a little jealous.

They discussed the requirements that the camera would have to create a successful tintype. The first being that the drone would need to be steady enough that it could stay still for at least a 1/10th of a second exposure. The drone would also need to be able to handle a fairly substantial load. The Sinar F2 and Petzval lens, is the lightest combo that Giles has for such work, and it comes in at around 8kg. 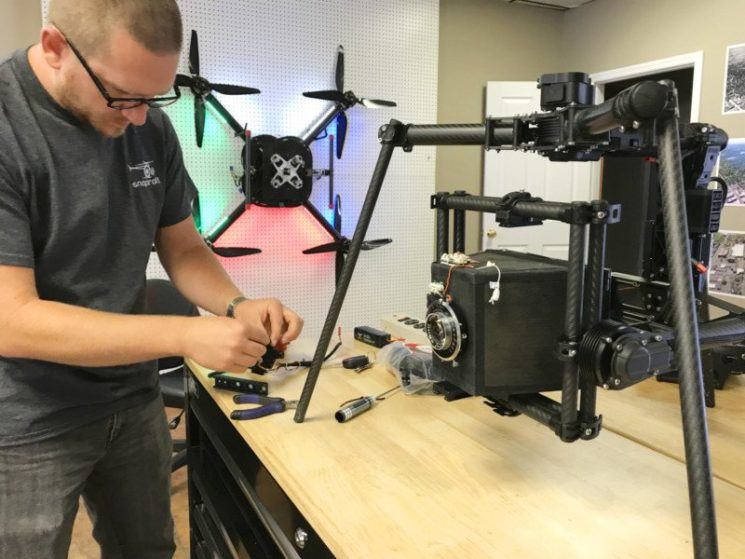 The drone chosen to carry the camera was the Freefly Alta 6 with the Freefly Movi gimbal. While the weight wouldn’t be a problem, the physical size of this system would. So, Giles had to make a new camera completely from scratch in order to have it fit into the drone’s gimbal. 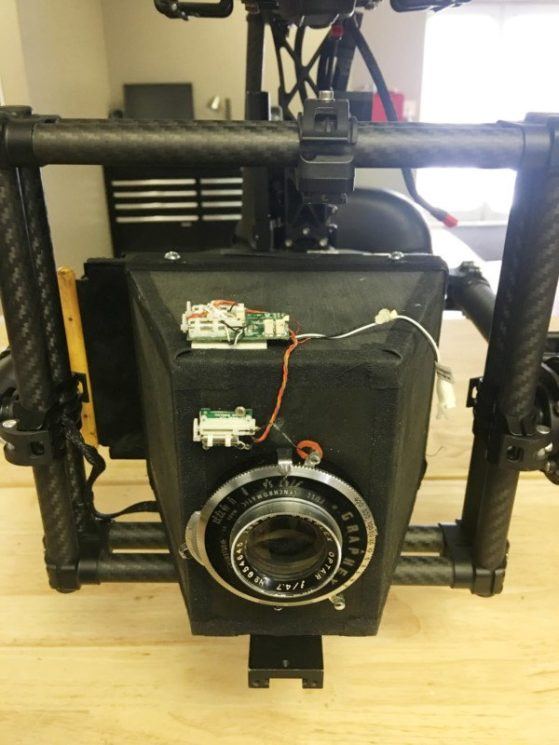 Even just the building a large format camera from scratch is very impressive. Giles coated it in black light tight paint and used epoxy to attach a 1/4-20 nut for mounting to the gimbal. To figure the shutter, a linear micro server from an old RC plane was used, along with a receiver compatible with a Spectrum DXE transmitter. It wasn’t pretty, but Giles says it worked, and worked well up to a range of about a quarter of a mile. 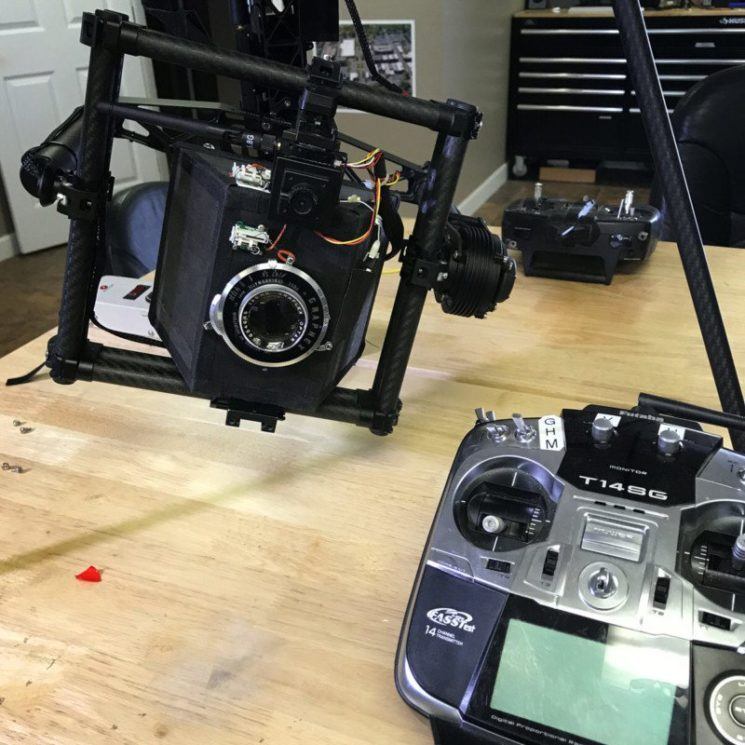 Once mounted, balanced and with the motors tuned, they headed outside. Giles has a portable darkroom that he uses on location when shooting tintypes. This allows him to prepare and develop the plate no matter where he is. He quickly poured collodion gel over a 4×5 aluminium plate and placed it into silver nitrate. Now sensitised, it was put inside a film holder and attached to the back of his DIY camera.

You only get about five minutes working time to get your shot after the plate is prepared, so they rushed to get a suitable view. Using FPV to get an idea of the drone’s perspective, the shot was framed overlooking a nearby lake. The shutter was fired, and Giles exposed the world’s first aerial tintype. 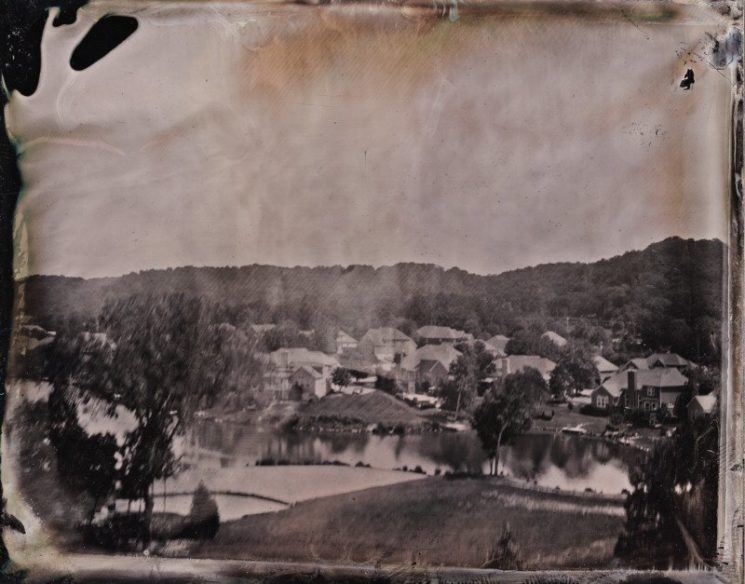 He says that he may or may not have let out a little happy expletive when he saw the image emerging in the fixer. After all, he’d had this dream for several years. And it worked! Somebody pointed out, however, that the shot looks like it could have easily been taken from a hill or tall building. It didn’t really show off what they’d achieved.

So, after a few minutes, they came up with a solution. They decided to include the drone’s shadow in the shot itself. And to smash another world’s first, they decided to also make it a selfie. And what a fantastic shot it is. 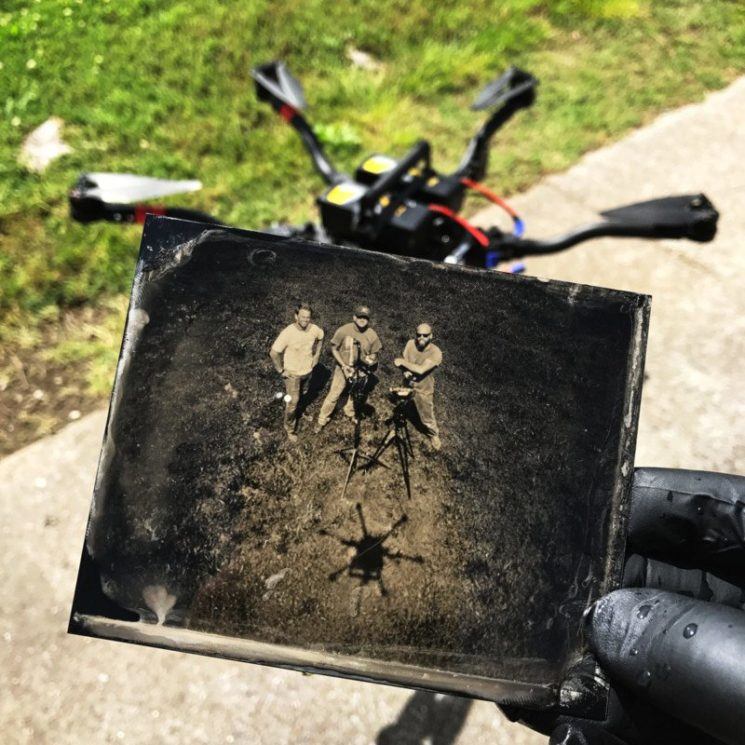 Seeing this appear on the sheet of aluminium in person must’ve been a pretty amazing feeling. Even if you’ve been doing tintypes for a while, something as unique as this is quite special. 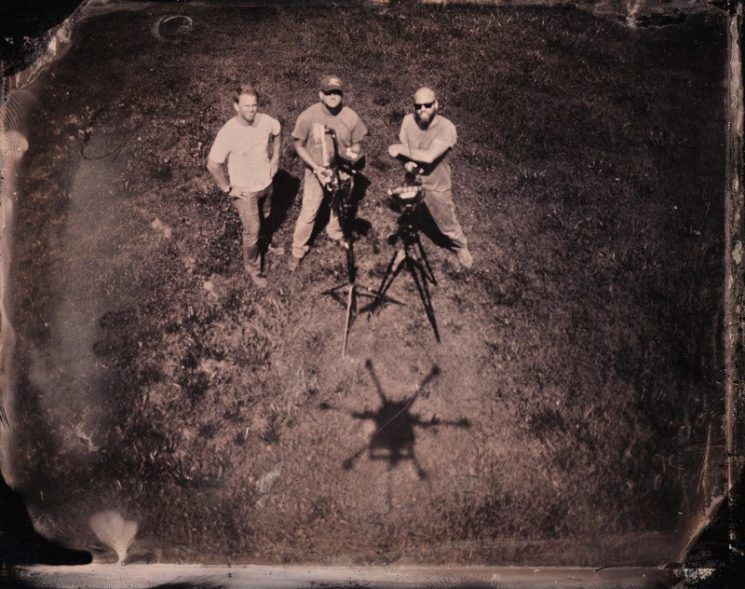 Giles certainly seems to be happy with the result, and has plans to try again with a much larger camera. Scaling up from 4×5 to a massive 8×20 inches is going to be some achievement. I can’t wait to see that shot.

If you want to find out more about Giles and check out his work (which you definitely should!) head on over to his website. You can also follow his adventures on Instagram and reach out to him through Twitter. Images used with permission.