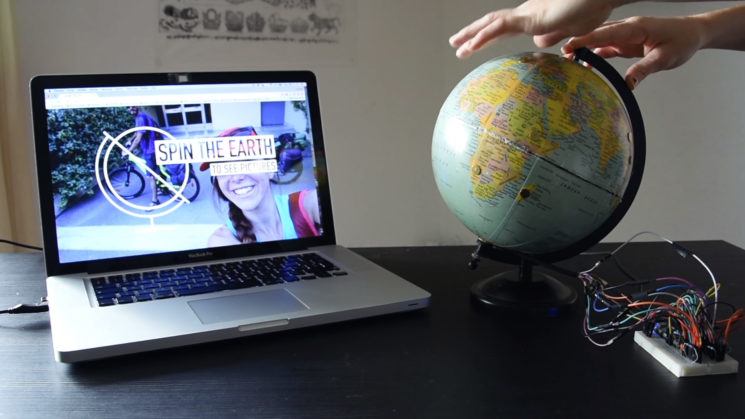 One of the biggest advantages of mobile photography for me is geotagging. An iPhone has been my go-to location scouting camera for about the past five years now. In an instant I can bring up a map of the world. Then scroll through it to find my images and where I shot them. More recently, I’ve switched over to using a DSLR with built in GPS. Flicking through Google maps with a mouse is ok, but it’s just not the same.

Well, Switzerland based designer by the name of Caroline Buttet has come up with an amazing solution. She’s made her own interactive touch-sensitive globe that controls the images shown on her monitor. All you do is tap the country you want to see, then spin the globe to browse the images.

Caroline writes on her website, “I love travelling, but I think it’s always quite boring to show pictures to people”. I have to agree. Over the years I’ve sat through many boring presentations of holiday snaps. Who hasn’t? And this is a pretty cool way to let those who want to see them interact with them in a fantastic way.

The Globe Trotter started off life as your standard desktop representation of the planet we call home. But after cutting it open, adding a few pins, some wires, and an Arduino, it’s transformed into something very cool. The pins work like capacative touch sensors. It’s a crude implementation of how your phone’s touchscreen works. When you tap a pin, it tells the browser to load up the first image for a given country. A potentiometer that rotates with the globe’s spin then advances through the images in that set.

Caroline also posted a video of the Globe Trotter in development, explaining how the principles work.

Caroline tells Digital Trends that for now, it’s just a proof of concept and there are many improvements which can be made. Integration of geotags, sorting photos, switching out the USB cable for Wifi, etc.

She made it with no plans for commercialisation, but she’s been getting a lot of requests about it from people all over the world. If there is enough interest, Caroline says that she may publish the code and make it open source.

Turning it into an open source project would be very cool. It might just make some of those potential features she mentioned come to life. I’d want one on my desk.

Quickly Browse Through Your Film Negatives Using Only Your iPad

How to make & use a single DIY globe modifier for simple, stunning portraits