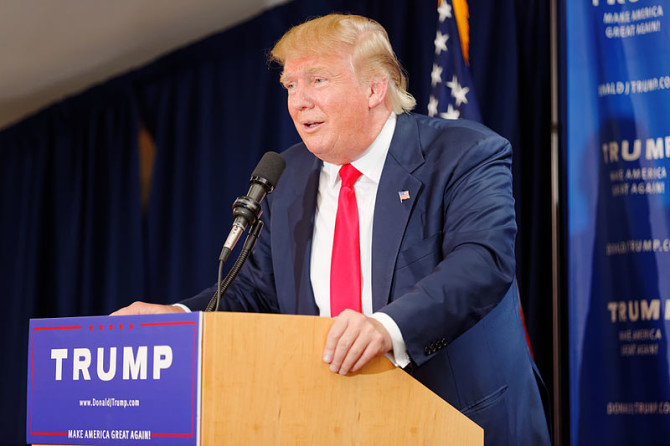 Donald Trump is many thing, but gentle-tempered is probably not one of them. On his Wednesday  speech in a South Carolina ballroom AP photographer Mic Smith took a photo of the ballroom looking half empty with all the back chairs being unoccupied. That photo was used by news outlets like the NYTimes and  businessinsider to suggest that Trump is losing traction.

The interesting news however is Trump’s reaction in an interview to the Dailymail. Trump was so upset with the photos that he claimed that “The photographer is a f***ing thief” and “Tell them they’re a fraud, whoever took it. I just got killed on that thing, and it was just really unfair. It’s godd**n unfair“. Mr. Trump also complained that “They all got out of their chairs and they ran to the front. And I look like a schmuck. If those people moved back into their chairs, the room was full. Totally full”

Indeed, there were other photos taken by mr. Smith framed differently and showing a more crowded scene, but they did not evoke the same coverage or angry response.

Here are the tweet and photo which started this skirmish:

My report from SC on Trump, whose first event had scores of empty chairs > http://t.co/AXWidtmZzr pic.twitter.com/1Mpqa8nDww

Here is Mr. Trump’s tweet in response for the reporting:

While the tendency here is to focus on Mr. trump and his anger (or Mr. trump and his campaign stats), I think this is a wonderful opportunity to show the power of framing. One photo shows Mr. Trump as a total Winner while the other puts him in quite an uncomfortable spot. While both photos taken so close in time, just using a differnt point of view and different framing.

[via dailymail, photo by Michael Vadon]

Photographer Answers the Question, ‘What Would Chairs Look Like As People?’

« Japanese Photographer Captures The Beauty Of Living In Japan
Dont have enough Selfies? Use This Spoon Selfie Stick So Everyone Can See You Eat »