Radio controlled camera vehicles are becoming quite common. We’ve seen them used for time-lapse, mounted on RC helicopters and even on RC planes.

What I have yet to see is a full array of cameras controlled by a midi keyboard.

Maker Josh Cardenas teamed up with turntablists DJ Shadow and Cut Chemist to bring the hidden mastery of cutting and spinning into front row. Using no less than 9 CCD security cams, a custom track, some RC servos and an over head rig suspended with the lighting equipment, Josh was able to share those intimate quiet moments at the DJs table. 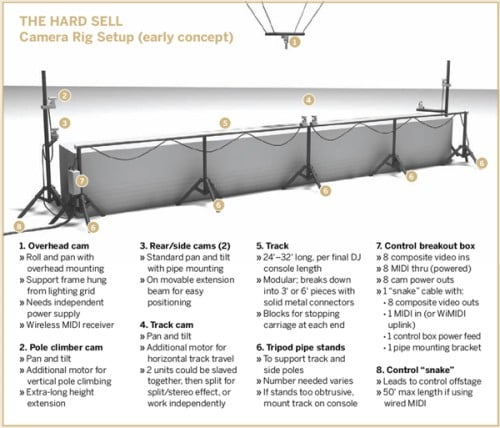 Some of the cameras were fixed, but other can slide, tilt and pan using the servos.

Since Josh was concerned about a noise radio environment he rigged the controlled to a Korg MicroKontrol MIDI controller keyboard.

Here is an output video, you can see the ring in some of the wider shots.

I had the chance to run visuals for a unique DJ act called The Hard Sell, a collaboration of turntablists DJ Shadow and Cut Chemist. The art of spinning and cutting records is usually not visible to dance club audiences. Cut and Shadow wanted to let everyone see, up close and personal, all the action on their 8 simultaneously spinning turntables playing old 45s. But they needed a way to do it unobtrusively. Given the often cramped spaces of the venues they perform in, they couldn’t have a crew of sweaty dudes in black clothes wielding cameras in their faces. Also, Cut and Shadow wanted to mix in additional visuals from DVDs, to change and match the moods of the different tracks.

I got involved when Ben Stokes, the show’s lead visualist, said to me: “I like robots. I like cameras. I love robot-cameras! You build all kinds of crazy stuff; what can you come up with for this?” I suggested I could probably make some small robotic mounts for the cameras, each with their own pan-and-tilt mechanism driven by hobby servos. They’d be small, light, cheap and effective — my favorite combo!