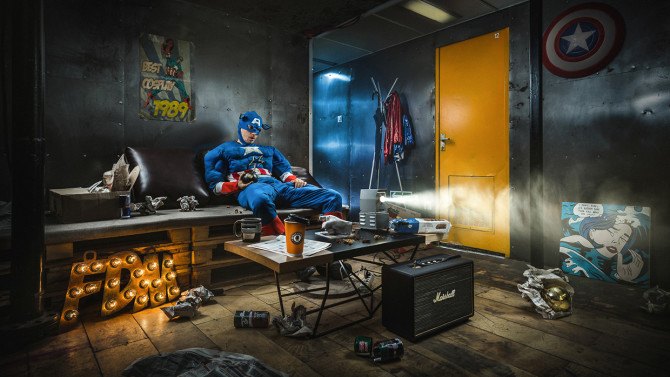 When I first came across the work of Russian photographer, Ilya Nodia, I knew I was going to like what I saw as I headed towards his portfolio.

In this particular project, the tale of “Captain Sadness”, the story goes something like this…

In 1989, young Rick Sogers won a lookalike competition of Captain America in Rochester.  Many years have passed, and now the 43 year old man spends the nights in his stylized basement. 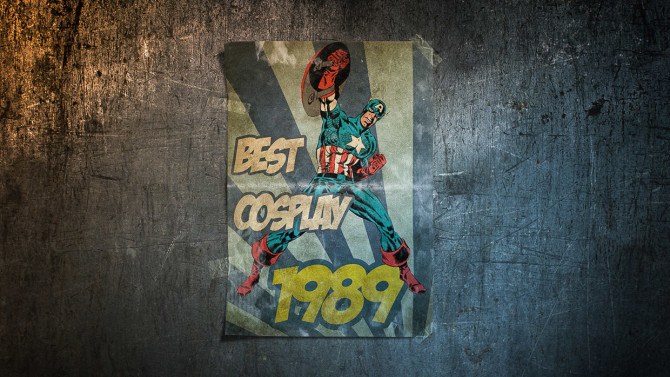 Without taking off his shabby suit, he drools and eats dried oatmeal cookies, enthusiastically remembering the brightest triumph of his life.  Even the neighbourhood boys, who call him “Captain Sadness”, lost all interest.

The only happiness for an adult whiner – old slides of the classic comics and a Wonder Woman suit on a hanger, which might once have crossed the threshold of this gloomy dwelling.

I love the idea of down and out super heroes, and it reminds me a little of Watchmen, so DIYP got in touch with Ilya to ask him more about himself the project.

My photographic life began about 8 years ago.  I started shooting when I went to college.  My professional education was as an engineer/programmer.  In our town there were many technical people who later moved to become photographers.

For me, photography is first and foremost an art of expression.  I like to experiment, to look for something new and to surprise my clients and colleagues.  In addition, photography allows me to find new friends all over the world. It’s great!

All that is now in my portfolio is the result of the last three years.  Before that, I was shooting weddings and private photo shoots – not interesting to do.

One can see from Ilya’s portfolio that he’s passionate about photographing people, especially very stylised portraits.  DIYP asked Ilya what led him to this.

Earlier, at the beginning, I was very afraid of taking pictures of people.  What pose?  What emotions?  Clothing?  Plot?  It all seemed very difficult for me.

Over time, I discovered a new world – the characters, history, professions, countries. People have become for me the main direction and now I’m shooting, mostly, narrative genre portraits.

And why a downtrodden super hero?

We heave a funny photo agency, Fun’Da’Mental, and this is local shooting for us.  The man in the costume is our boss. 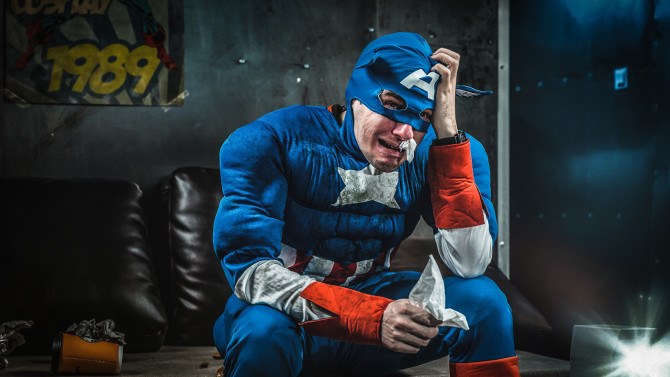 With a shoot like this, there’s a lot to plan and prepare, and Ilya told DIYP some of what went into getting things ready for this shoot.

At first, I location scout.  We have a big ship in the downtown area, which we have an office inside.  The location in pictures is on the bottom floor of ship.

Normally it is an empty space, but my friends brought a lot of different things to create a complete decoration; Table, projector, newspapers, Marshall amp – everything you see in the pictures, we brought ourselves.

Because our office is located on the ship, we were given free access to a few hours. 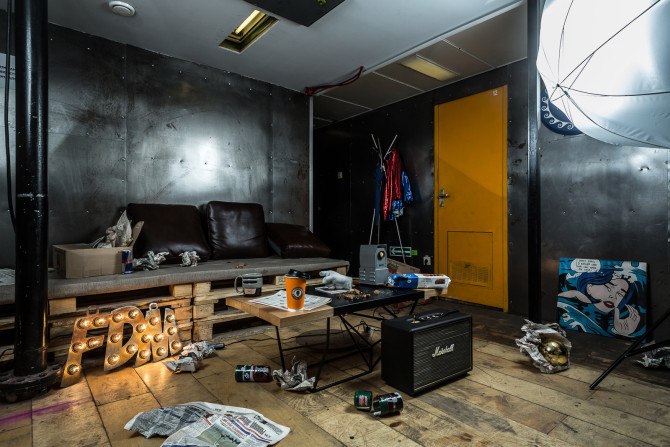 Ilya managed to produce these images without a big crew of stylists and assistants, preferring to work alone when possible.

It was all very simple, so I did everything myself, even the clothes.  Most often I work alone, especially when it comes to artistic shooting.

I formed myself a good mobile set, which I can take around different cities and countries.  A Canon 5d mark III, a set of fixed lenses 20mm, 35mm and 50 mm, as well a speedlight, of course, a Canon 600EX-RT.

In addition, I often use a panoramic head – to create a larger images. 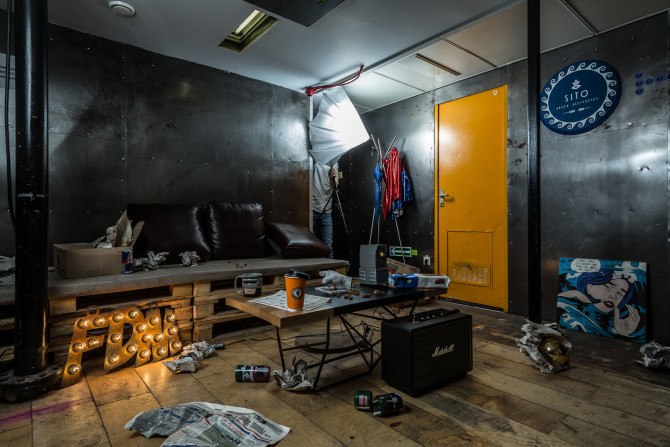 With such a modest set of equipment, and only a single flash, the decision to make these images as a series of composites seemed like a good choice.

I would like to receive an excellent light on the whole picture.  I can use different options when shooting, to make the most efficient post-production.

To get the same effect in one shot, I need to have a lot of flashes.  Making a single picture from many and compositing is much easier, cheaper and faster.

In order to control the light, I use diffusers – in my case it umbrellas, because they are highly mobile. If you have the opportunity, it is better to use softboxes. In addition, I often use warming gels. 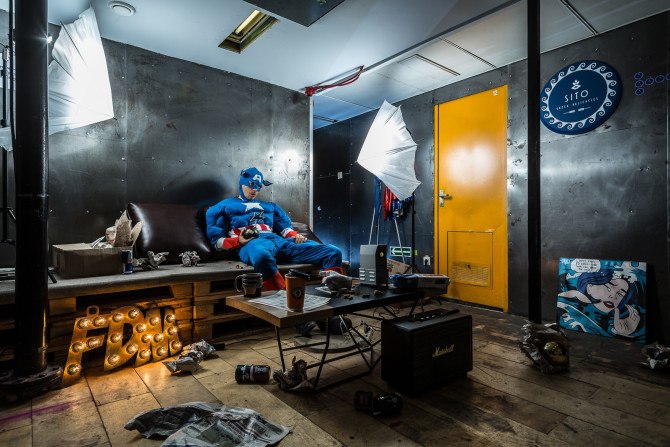 Even on location, Ilya shoots tethered to Lightroom so that he can see the images as he shoots, and the parts of the final composite coming together.

I always work directly with the computer in the location.  After shooting, I take my raw files into Lightroom, where I make some slight corrections.  After that, the images are stacked and most of the post is done in Photoshop.  I finalize the PSD files with Lightroom again.

Of course, many professionals are using a Capture One and that’s great software.  I think I will use that in the future.

Ilya shared some more images with us, illustrating how it was built up in Photoshop to create the final image. 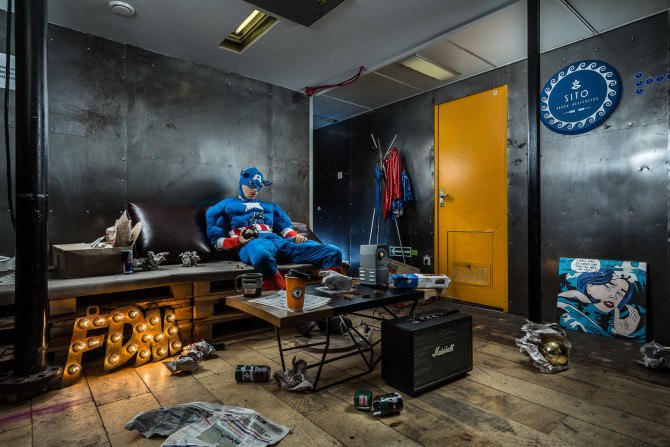 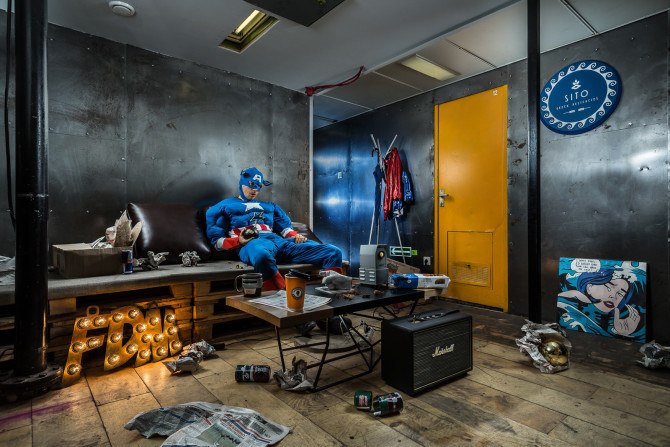 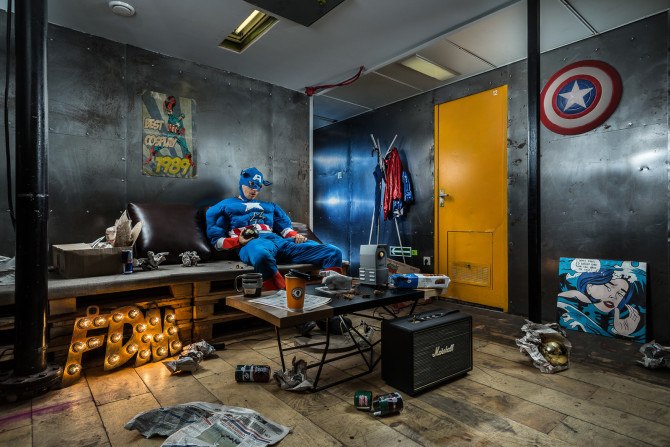 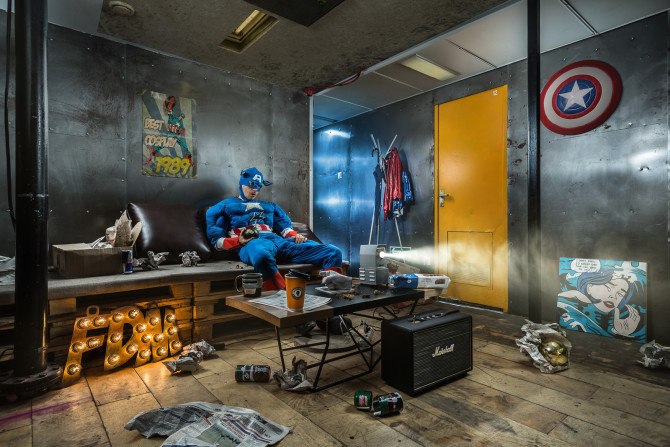 This is my typical shooting, so the most important part for me here, is emotion and the realization of funny story.  Post-production of all the pictures takes a few hours.

As for the future of the project, this is what Ilya had to say…

We really like a hero-stories in our agency.  We have an Instagram account, where sharing a funny superheroes pictures everyday, so I think we are definitely going to shoot new superheroes.

A big thank you to Ilya for offering DIYP some insight into his work process on this shoot, and I definitely look forward to seeing where this project goes in the future.

You can see more of Ilya’s work on his website, and keep up-to-date with his projects on Behance.  Images used with permission.

« Before & After – A post processing comparison with Peter Stewart
Shooting the moon with a Raspberry PI, a cheap lens and no DSLR »