The GoPro Hero 6 is here. It’s new, it’s shiny, and it’s $100 more expensive than the old one. But is it worth the upgrade? The GoPro Hero 5 was something of a disappointment for many. Sure, it had built in waterproofing and  touchscreen. But beyond those, it did really seem to offer all that much over the GoPro Hero 4 Black.

So how does the GoPro Hero 6 compare? This video, from the folks over at Vistek, puts the new Hero 6 head-to-head with its predecessor, the GoPro Hero 5 to see if it’s really worth upgrading.

And, internally, the most notable difference between the two is the GP1 custom processor. This upgrades the GoPro flagship from 4K at 30fps to 4K at 60fps. On the slow motion side of things, 240fps has received a bump, too, going from 720p to full 1080p HD. And there’s 2.7K at 120fps if you want a balance between slow motion and a little extra frame room in post for stabilisation.

One thing that’s immediately noticeable to is that the Hero 6 seems to be a lot more conservative with its exposure. But while the sky here is substantially darker, there seems to be at least as much detail in the shadows.

It’s estimated in the video that the extra dynamic range of the Hero 6 is about a stop to a stop and a half. Looking at some of the shots with the two cameras side-by-side, it also seems less prone to flaring and blooming, too.

Electronic image stabilisation has also received a pretty big boost. On the Hero 5, stabilisation was only available at resolutions up to 2.7K, and came with a 10% crop of the image. The Hero 6 offers stabilisation all the way up to 4K, but  only at frame rates of up to 30fps. It does, however only crop 5% of your image, so you’re capturing more in the shot.

As well as the spec upgrade, the stabilisation also seems to have had a pretty significant stabilisation upgrade, too. The sample clips shown in the video are drastically improved over the Hero 5. Of course, electronic image stabilisation is a moot point if you always use it with a gimbal anyway.

Slow motion 1080p footage at 240 frames per second doesn’t look that great, though. There’s noticeable aliasing, so anything with hard contrasty edges is going to look like crap, if these examples are anything to go by. It also looks to have some pretty severe compression issues. 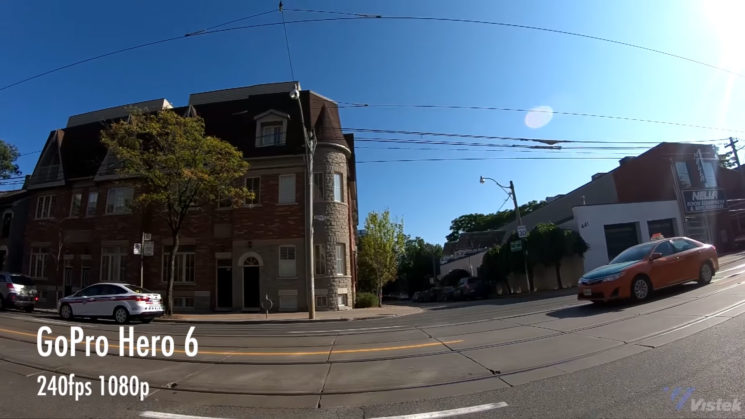 Of course, you do still get 120fps stabilised footage at the same resolution, and it looks very good. The ISO performance looks to be slightly improved, although high ISO with sensors this small is still far from perfect. Overall, though, it seems a rather impressive little camera.

If you don’t already own an action camera and you’re considering a GoPro, then it looks like spending the extra $100 for the Hero 6 is well worth it. If you already have the Hero 5, though, I’m not sure it’s worth eating the loss to sell it on the used market to upgrade. But, maybe that’s just me, and it will depend a lot on what you use it for. If the Hero 5 is still doing what you need it to do, there’s really no point trading up.

The GoPro Hero 6 Black is available now for $499. If you’re not convinced and want to save yourself $100 then the Hero 5 Black is also still available for $399.