I use the GoPro Hero cameras all the time for my video productions, but not for action. I like the tiny Hero’s for moving car shots, street walking and just general situations where a little camera can be placed in out of the way places to pick up my shot.

So when the Hero 10 arrived for review, with an emphasis on improved stabilization and power, I knew who to call to help me do a 10 vs. 9 shootout. 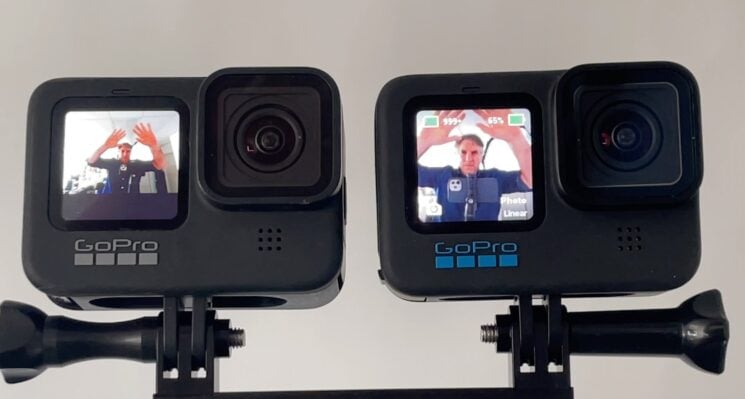 Jan Schrieber, who runs the AdventureMuse YouTube channel is an avid surfer and mountain biker, and she agreed to go up and down the hills of Laguna Beach for me several times, as we strapped two Hero cameras to her chest, for side by side comparisons. 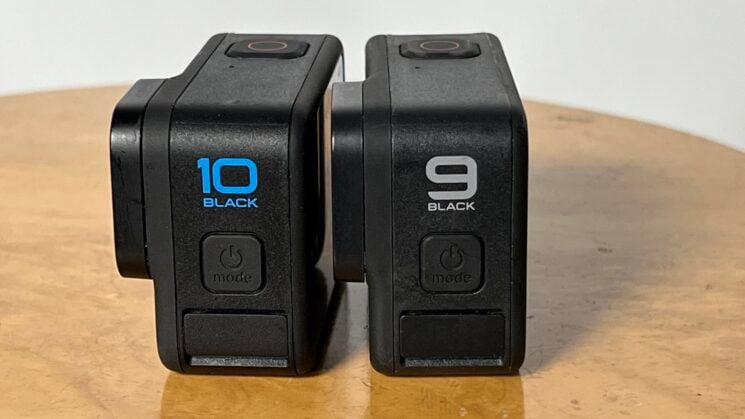 —A faster processor for zippier performance.

—Improved electronic image stabilization, or, as GoPro calls it, “HyperSmooth 4.0,” up from 3.0.

—Better leveling, for accurate horizon lines, even when the camera is at a tilt. 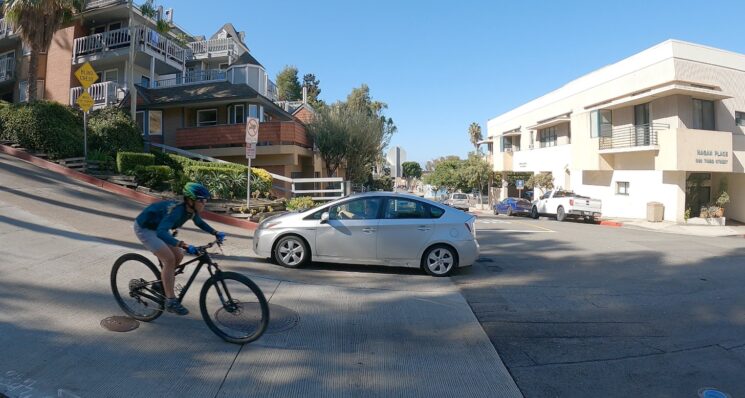 And here’s what we found, in our real world, back to back tests.

The Hero 9 is really awesome. So is the 10. Just not demonstrably so.

GoPro says performance on the 10 is two times faster. We didn’t see that. The only place extra speed was noticeable was in the processing of the photos, which indeed was zippier and a plus. But I use the GoPro for video, to capture scenes I couldn’t with a big camera or a smartphone. Stills on a Hero are very rare for me. They’ve never been good enough to bother with. 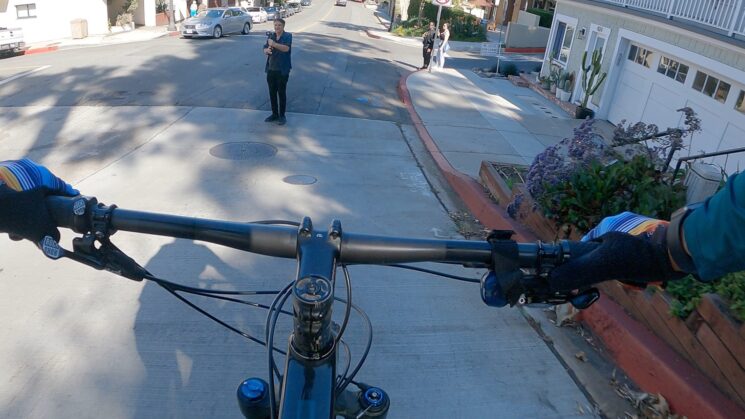 Stabilization? Yeah, it’s great. But so was the 9. Watch the video and you’ll see Jan barreling down a trail and steep 3rd Street. If you look really, really hard, you’ll see that the 3rd Street shot is slightly steadier. But make that slight. The trail shots looked the same, as did my walking shot in downtown Laguna.

The lens coating is a nice addition. On Jan’s surf shots, in the past, the camera would show water spots that were hard to deal with while she was surfing. The new coating eliminated that. But as she points out in the video, you could buy an accessory lens cover for around $20 to fit on her 9 that would be a much cheaper way to fix the problem. 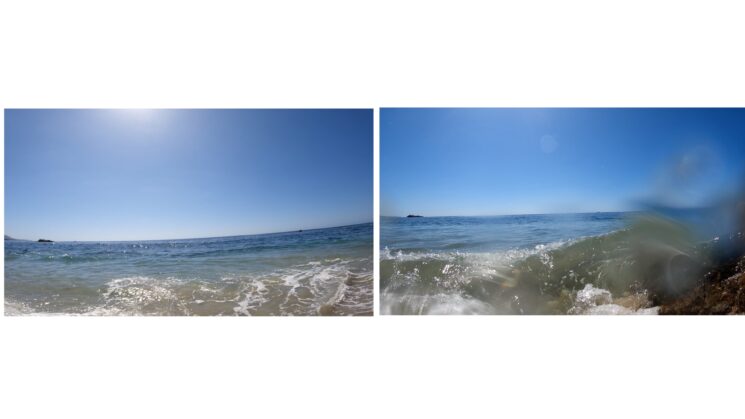 When I tried out the leveling, this one really did work nicely, better than on the 9. When you’re zipping down a ski hill, or a bike trail, for instance, it’s kind of hard to compose your camera for a steady horizon line. So this really helps.

Enhanced low-light performance, per GoPro. I didn’t see any difference. The camera performs as poorly in low light as did the 9. Hero cameras do their best in wide, available, daylight. Period. My night shots were as dark as a black cat, on both the 9 and 10. Even the shots we did just after sunrise in downtown Laguna were very grainy.

Battery life: this is an area where GoPro inexplicably went backwards. I averaged about 30 minutes of use on the 10, vs. an hour on the 9 in our tests. 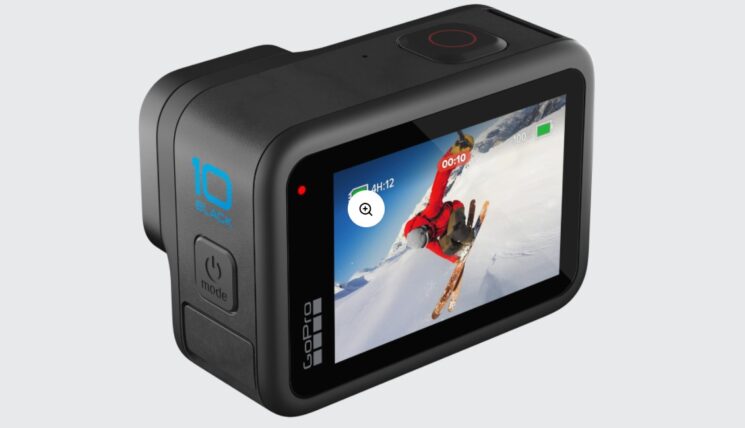 A quick word about GoPro’s $49 yearly cloud backup subscription program, which offers more than just online backup. It also throws in discounts on repairs and accessories.

The company is so intent on you signing up that it will practically pay you to do so. The full price of the Hero 10 is $499 if you don’t subscribe. It falls to $349 if you agree to sign up, and the company throws in an extra battery and 32 GB memory card. 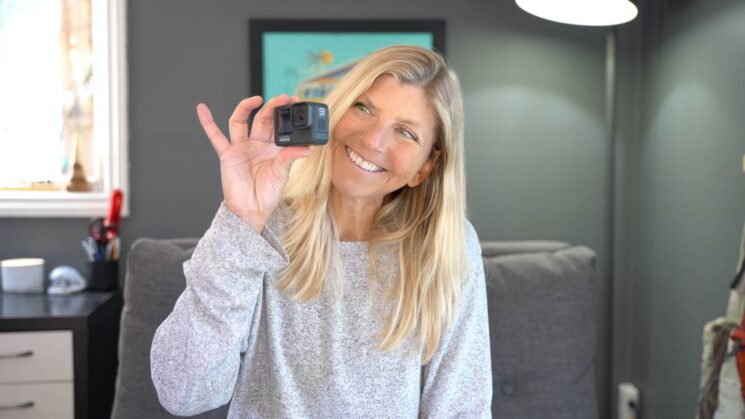 Schrieber, who subscribes, says the service is worth it. “I busted my 9 and got it repaired for $99. So for $49 it’s not too bad of an investment considering I’m really tough on my cameras. Plus you get 50% off GoPro gear and unlimited cloud storage.”

So signing up for GoPro’s subscription program (formerly called GoPro Plus, now just GoPro) is pretty much of a no-brainer. You’ll save money by doing so.

But whether you need to replace your 9 with a 10 isn’t as easy a decision, since the 9 is so good. With each Hero version, there has been improvement with resolution, quality and features. On the new model, it’s just hard to see most of them with the naked eye. If you have an 8, which the company says has “Amazing HyperSmooth 2.0 video stabilization,” well, you will definitely do better with 4.0 on the new camera. And if you go back to a 7 or 6, sorry, but it’s time to shell out some money.

And if you’re new to GoPro, and want a camera that can attach anywhere from a ski helmet, bike handlebars, dog collar and places we wouldn’t dream of putting a smartphone, then welcome to the world of the 10. 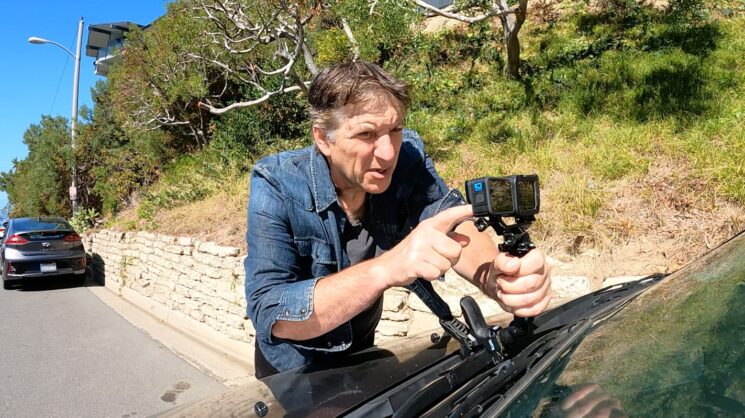 Jefferson Graham is a Los Angeles writer-photographer, the host of the Photowalks travel photography series, which just began its second season on YouTube. A former tech columnist for USA TODAY, Graham is an instructor for Kelbyone.com, and can be found on Twitter, Instagram, Flipboard, and Facebook. This article was also published here and shared with permission.

GoPro opens up the Hero 9 Black to developers with new Open GoPro API
« Winners of the Close up Photographer of the Year 2021 announced
You don’t always need epic landscapes, this photographer make beautiful abstract art out of mud! »