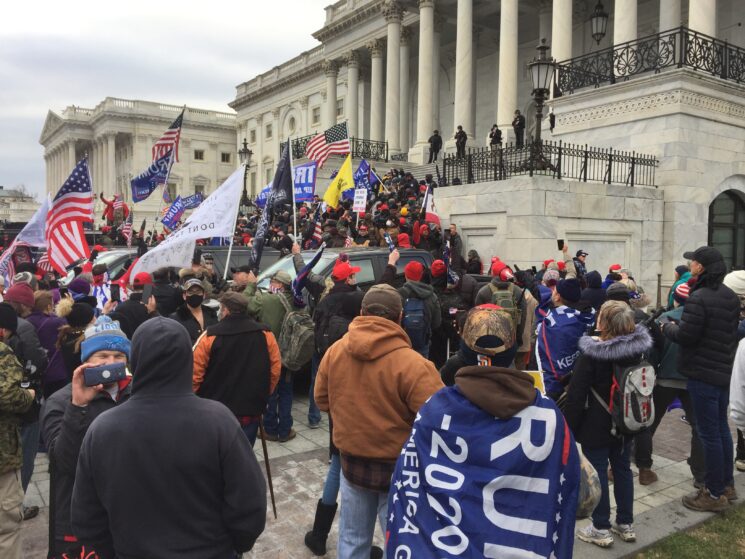 The attack on the US Capitol happened on 6 January, but photos, videos, and news are still surfacing. Over 400 people have been arrested so far, but at least one of the suspects was caught thanks to Instagram. The FBI used photos and videos from his girlfriend’s Instagram and identified the man with some help of facial recognition.

FBI posted on Twitter that Stephen Chase Randolph from Kentucky had been arrested “in connection with the violence at the U.S. Capitol on January 6th.” He was charged with “assaulting, resisting or impeding an officer causing bodily injury,” “obstruction of law enforcement during civil disorder,” and “obstruction of justice/congress.”

#BREAKING: STEPHEN CHASE RANDOLPH of Harrodsburg, KY was arrested today in connection with the violence at the U.S. Capitol on January 6th. Stay up-to-date on all of the Capitol Breach cases here: https://t.co/dwam3OWYxd pic.twitter.com/WdDTO7cB0L

According to multiple sources, Randolph was caught on video while pushing into and pulling barricades from officers. He also got confrontational with the officers, which reportedly caused a USCP officer to fall and hit her head on the stairs behind her. She lost consciousness, and Randolph reportedly continued to assault two other USCP officers.

The rest of the story seems like an episode of FBI TV shows. The FBI pulled a still frame from the video of Randolph at the riots. The image, originally known as 168-AFO, was submitted to an “open-source facial comparison tool.” The results led to an Instagram page of a person who appeared to be Randolph’s girlfriend. Some of the photos on her profile showed Randolph wearing the same clothes he wore during the riots.

Thanks to his girlfriend’s Instagram account, the FBI got the suspect’s first name. Then came some checks of friends’ and relatives’ Facebook accounts, that resulted in the suspect’s first, middle, and last name. Finally, the FBI pulled Randolph’s driver’s license photo, and you can guess the rest: he turned out to be the man from the video everything started with.

After identifying him, two undercover agents spoke to Randolph at his workplace. During this conversation, he admitted attending the riots, adding that being a part of the crowd “was f****** fun.” He was arrested and made his initial appearance in court on 20 April in the Western District of Kentucky.

This isn’t the first time someone got arrested thanks to Instagram. Although, a phone thief and car thieves from previous stories gave themselves away because they posted selfies. However, this story is something between a TV show and pretty thorough stalking. It’s also a reminder that it’s easy to track anyone down, and that your Facebook and Instagram data are far from being as private as you may think.