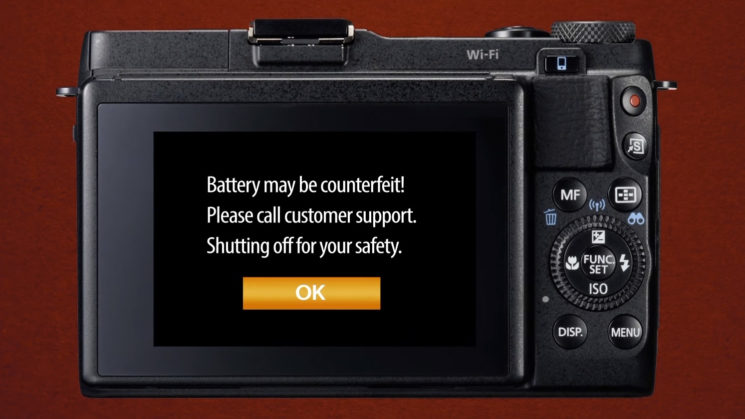 I don’t know why, but I always get a shock when I see how many fake products there are out there. Not clearly marked 3rd party alternatives, but products actually designed and branded to look like the originals. We see it with memory cards regularly and even camera strap accessories, but fake batteries are also out there. Canon has been doing something about the latter, though.

Canon has announced that they’ve won a lawsuit against two eBay sellers for selling counterfeit “Canon” batteries. While 2 sellers may not sound like a lot, the fact that Canon even went after them is certainly going to give other counterfeit sellers some pause for thought.

Press releases don’t usually come after a company goes after somebody for trademark infringement. If they did, that’s pretty much all you’d ever see on the Disney website, but Canon did put out a press release regarding this one last week.

Canon U.S.A., Inc. and its parent company, Canon Inc. of Japan, are pleased to announce that the companies have won a lawsuit involving the unauthorized and infringing use of the Canon trademarks and the illegal sale of counterfeit “Canon” merchandise against two defendants in the U.S. District Court for the Eastern District of Pennsylvania. Judge C. Darnell Jones II entered a Final Consent Judgment on December 12, 2019 prohibiting the defendants from infringing and counterfeiting the valuable Canon trademarks. As part of the resolution, the defendants also paid a significant amount of money to Canon for their unlawful activities.

Below is a copy of the court documents, obtained by PetaPixel.

As well as obviously protecting their intellectual property, Canon says their goal was the protect the health and safety of Canon customers. After all, we don’t know what battery cells are being put into these fakes, or how good their electronic protection circuits are to prevent over or undercharging that can cause lithium-ion batteries to explode.

Reports of exploding “Canon” batteries wouldn’t be very good for their PR, either, especially they’re not actually Canon batteries, but misidentified fakes. Canon also has a video and a dedicated page on their website about how to spot whether you’ve got a fake battery, and what to do about it if you receive one.

While fakes like these, pretending to be original batteries, obviously pose some potential risk, you do have to be careful with 3rd party batteries, too. If you go the 3rd party route, make sure you buy from a name people have heard of with a good reputation. Or, just buy the originals.

Canon isn’t the only company that’s been the target of fake batteries. Nikon, too, has seen its share, with some pretty major retailers even being duped into stocking and selling them unknowingly. Fakes get harder and harder to spot as the counterfeiters get better.

Have you ever been sold a fake camera battery?