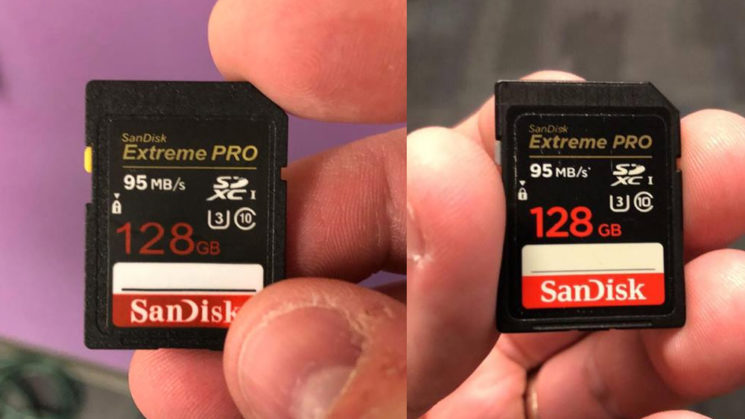 It seems the fakes are out in force again at the moment. I’ve seen a number of posts across Facebook and other social media where people have ordered SanDisk and other SD cards only to receive counterfeit cards. These days, we need to be vigilant with memory cards.

Memory cards are made to varying degrees of quality, and these forgeries are often whatever’s cheapest. There’s no quality control, because there’s no backlash on them. The last thing you want in the middle of an important shoot is to lose all your work. Or, worse, your client’s work.

So, this PSA is prompted by a post I saw on Facebook the other day. DIYP has permission to show you the post and images here, but they’ve asked that we remove their name. 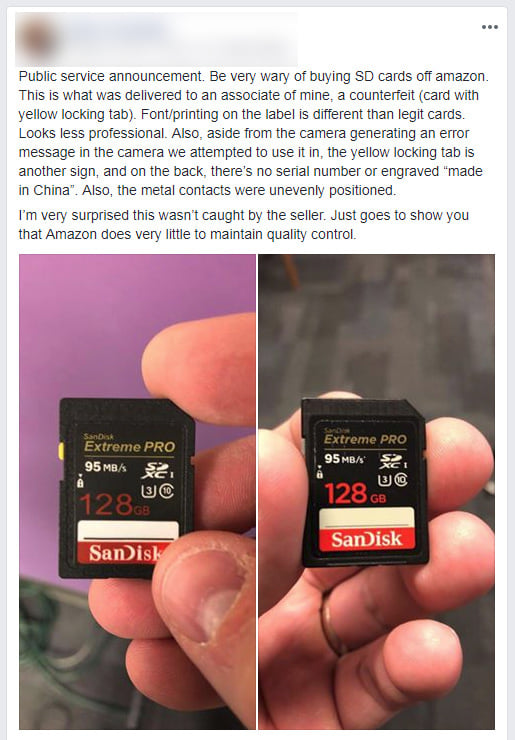 As noted in the post, the card was ordered by a friend. And what he received was definitely not a genuine card. You can see above that the font is obviously different from the original card, as well as the general spacing. Also, the little * is missing next to “95MB/s” for the little “Doesn’t really go as high as 95MB/sec in both directions” disclaimer. The locking tab is also a different colour, and he says that on the reverse side the pins are misaligned and the usual serial number and markings are missing.

Fake SanDisk (and other manufacturers) cards have been around so long that eBay even has a page to help you identify whether you’ve bought a fake card. There are also apps available to display the card’s information to see if it really is genuine, too.

A lot of the time, you don’t know you’re going to receive a fake card until it actually arrives. These listings will typically use the card manufacturer’s own product photos for their listings. But once it arrives, it often becomes fairly obvious if you’ve got another card to compare to.

It appears most likely that the card in the unnamed Facebooker’s post above was bought from a 3rd party seller. And 3rd party sellers are the reason I no longer go to Amazon as my first choice for anything. I’ve never experienced a 3rd party seller on Amazon that didn’t try to rip me off over something.

Even Amazon themselves aren’t immune to the occasional screw-up, though, as one person found out when the Canon 1DX Mark II he ordered turned out to be rocks. Twice. But if the order is fulfilled by Amazon and they send you a fake card, they will put it right.

3rd party sellers typically won’t. And it’s not Amazon’s job to check the boxes sent out by every 3rd party seller on their platform. No reasonable person could expect Amazon to even be able to do this. But, if Amazon receives enough complaints about a seller they’ll shut them down. Of course, there’s really nothing to stop them starting over again with a new name.

As far as eBay, they say there’s not much they can do about policing fake items for sale on the site unless the trademark holder (that would be the manufacturer) files the report themselves. So if, as a buyer, we receive a card that’s fake, all we can do is dispute our transaction. To actually get the listing taken down to prevent others being duped would require the manufacturer’s help – which is why fakes are still so rife.

SanDisk isn’t the only memory card company for which fakes exist. There are many articles up on the web about Kingston, Samsung, and others as well as generic advice.  And memory cards aren’t the only fake photographic products out there, either, as BlackRapid recently pointed out.

So be careful from where you buy. Go with a real and reputable store like B&H, not some random generic 3rd party Amazon or eBay seller. And make sure to give any new cards a good going over once you receive them before you trust them on a real shoot. Especially if there’s a client’s money or non-repeatable day on the line.

« How to make 3 great practical effects for your videos
Panasonic announces Lumix DC-TS7, a water/dust/shock/freeze proof camera for all sorts of adventures »