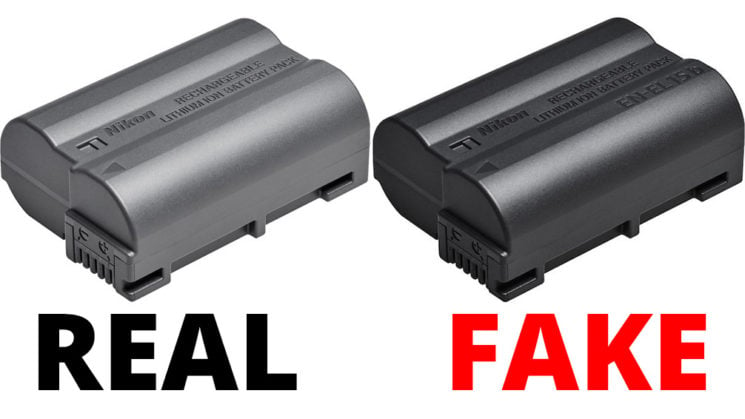 Last week, B&H emailed customers who’d purchased EN-EL15b batteries from them. They said that some of the batteries were “subpar”. It was suspected that this was a euphemism for fake, and according to a statement released by Nikon to DPReview, the suspicions were correct.

We have been made aware that some customers who purchased individual EN-EL15b batteries from authorized Nikon retailers received defective product. These batteries are not genuine and were not manufactured or distributed by Nikon USA. Concerned users can find a guide for determining if the battery they have purchased is a genuine Nikon battery at this link.

While many photographers have been using 3rd party batteries for years without issue, they’ve bought them knowingly. They’re advertised as 3rd party batteries and haven’t claimed to be the genuine article. Counterfeit batteries claiming to be Nikon originals, on the other hand, offer zero guarantees about what’s actually inside them. Nor is there anybody to come back to them in the event that they… Oh, I don’t know, do what lithium ion batteries occasionally do and blow up your camera or set fire to your house.

And don’t think it can’t happen (sure, the chances might be slim, but “can’t” is an absolute). If a company as big as Samsung can face issues over exploding batteries, how much do you think a company that puts the blame on Nikon cares about your kit and your safety? Or about how accurately they clone genuine Nikon batteries? This is why B&H has requested that you safely dispose of the batteries if you received some and not risk returning them.

So, get in touch with B&H if you’ve purchased one or several of the batteries (you should have an email, double check it’s not in your spam folder), and you will be issued with free replacements.

Nikon says that they have also received reports of fake EN-EL9a, EN-EL10 and EN-EL11 batteries, as well as others. If you’re not sure if a battery you have purchased is genuine, Nikon has a guide. Nikon’s statement also says “retailers”, although, besides B&H, I’ve yet to see a statement or email from other retailers regarding this issue. So, check Nikon’s guide if you’ve bought an EN-EL15b recently, just to be safe.

Photographing Portraits, Lifestyle, And Counterfeit Fashion With A $9 Budget Per Shoot

« Pegasus ripped the guts out of Nikon 24-70mm f/2.8 lenses and put them into cinema housings
After 16 years, I’ve finally found another backpack that I love – The Lowepro ProTactic BP 450 AW II »